The elephant bird egg, believed to be a model, has resided at the Buffalo Museum of Science for decades. CREDIT THE BUFFALO MUSEUM OF SCIENCE, BSNS Q 257

Buffalo, NY (WBFO) – A recent discovery at the Buffalo Museum of Science has the scientific community buzzing. A team uncovered a fully-intact elephant bird egg while digitally cataloging the museum’s oological collection.

The flightless bird, native to Madagascar was on average 10-feet tall and weighed between 770 and 1,100 pounds, according to Director of Collections Kathryn Leacock. The bird’s silhouette resembles the modern ostrich and emu, it is believed to have gone extinct around 1,200 AD.

The egg measures 12 inches long and 28 inches in circumference, and weighs 3 pounds 5 ounces, or the equivalent of 150 chicken eggs. There are less than 40 intact eggs known in museums around the world, making the find extremely rare.

For years, the museum displayed the egg as a cast model of an actual elephant bird egg. While cataloging, curators quickly began to suspect the egg was, in fact, real

Leacock said she has walked past the egg thousands of times and never questioned its authenticity. After the discovery of the second egg, Leacock said she and her team immediately felt a difference between the two.

“They were going through another cabinet and they found another giant egg. And when they pulled it out it felt like a cast, it felt fake, it was really heavy and kind of smooth looking,” Leacock said. “Then the question was ‘if this one in my hand is a cast, what’s that other one in the cupboard over there?’ As soon as we opened it up and felt the other egg, we got excited.” 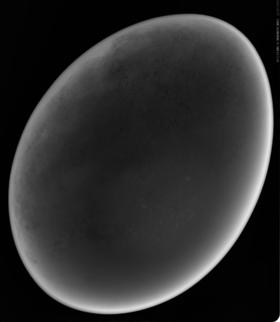 Leacock took the egg to the experts at the Patricia H. and Richard E. Garman Art Conservation Department at SUNY Buffalo State. Conservators radiographed the egg and confirmed their suspicions.

After confirming the egg was real, Leacock wanted to know how the museum acquired it. The museum’s archival record revealed the egg was purchased from Edward Gerrard & Sons — a taxidermy shop London — in 1939. She’s hopeful she can learn more about the egg’s history and how it

Cast eggs are commonplace in museum collections, Leacock said she’s not surprised the egg was mislabeled for so long. She’s excited for the Buffalo Science Museum to be part of the small global community that owns one of the rare eggs.

“There are no taxidermy mounts of elephant birds, there are a few reconstructed skeletons that are based off fossil remains pieced together, but there’s no [complete] existing skeleton,” Leacock said. “All we have to go by to know about this species are the eggs. So we have added to the known examples of this extremely rare specimen and it’s right here in Buffalo.”

To add to researchers’ excitement, the egg’s radiograph shows small white speckles on the bottom of the specimen. Leacock said there’s evidence the white spots are bone fragments, a potential goldmine for researchers. 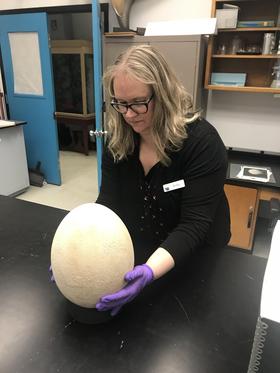 Director of Collections Kathryn Leacock holding the egg. CREDIT COURTESY OF THE BUFFALO MUSEUM OF SCIENCE

“The conservators and our team believe … there’s a possibility this may be a fertilized egg,” Leacock said. Obviously it didn’t get too far, but we hope researchers and elephant bird specialists can come to Buffalo and learn everything they can about the egg.”

The egg will be unveiled to the public on Tuesday, May 1 as part of the museum’s rethink extinct science studio.