ROCHESTER, NY (WXXI) – Luticha Doucette always knew she wanted to be a scientist, even if no one else thought she could do it.

“I was very much discouraged from going into the sciences. People would be like, ‘Well, don’t you want to be a teacher?’ And I would be like, yeah, teachers are great, but that’s not what my heart was in.” 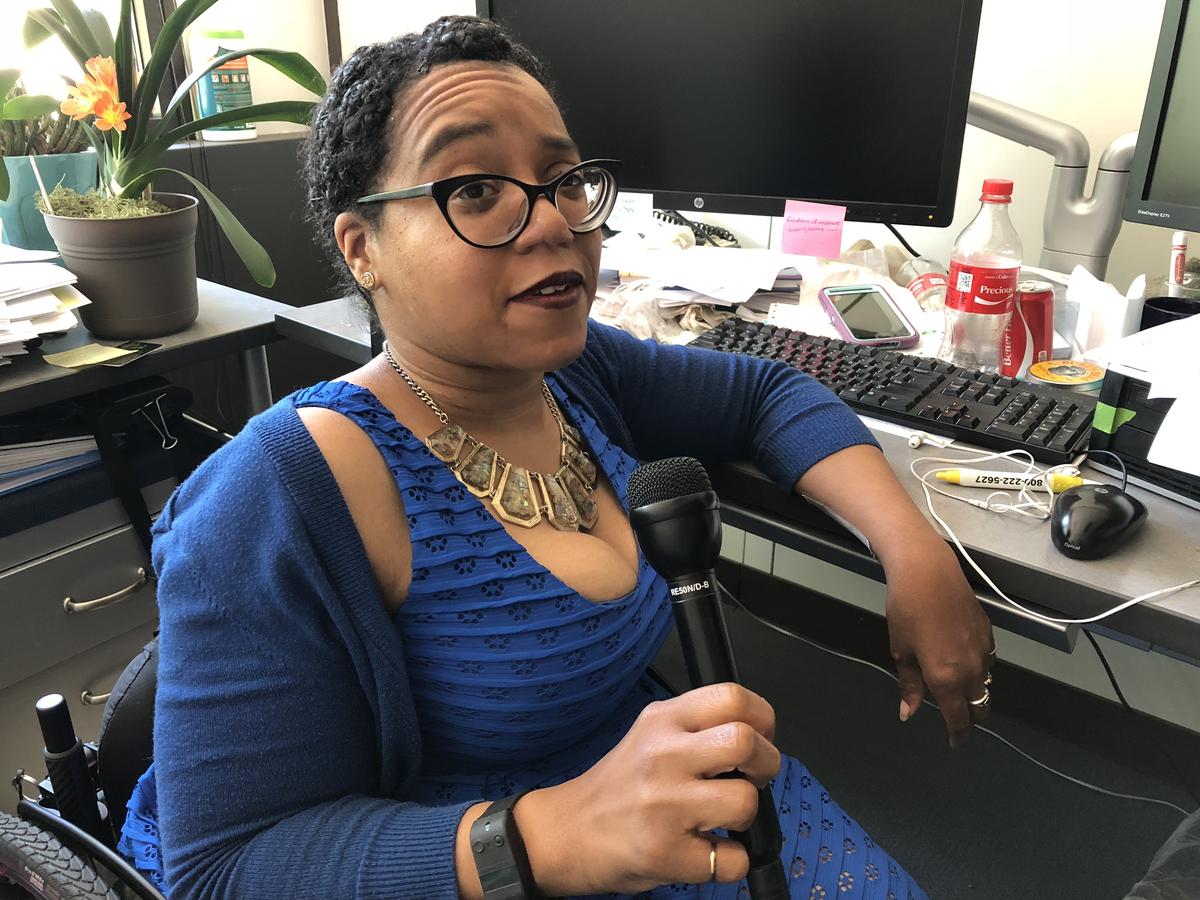 Doucette ended up at Rochester Institute of Technology where she majored in bioinformatics — but it wasn’t easy. For instance, in organic chemistry, she had a problem using the fume hoods. They’re basically these clear boxes that sit on a lab counter and you have to do your experiments inside them, so they can ventilate all the noxious fumes. The problem for Doucette is, they’re made for people of a certain height.

“Not only am I short – and I’m just short because, thanks mom your genes suck! I’m only 4’9 and a half, so as a woman who would stand, I’m still too short for this thing – but in a wheelchair I’m even more short.”

Because she uses a wheelchair, Doucette needed an adjustable height fume hood. She advocated for one, and eventually the school invested in the equipment, but the whole process delayed her college career.

“Once those were installed I was able to finish my classes but that took three years so instead of taking three or four years to graduate, it took me seven years.”

Doucette also studied at other colleges and did work in a graduate program at a different university. Every experience, she says, there was challenge just to be able to do the coursework — from physical barriers, like step entrances into controlled laboratory environments, to social barriers, like classrooms that could only be entered through back-door service elevators.

Under the ADA, universities are required to provide reasonable accommodations for students with disabilities to access their programs. Susan Ackerman is the disabilities coordinator at RIT.

“I think in general RIT and other colleges understand it’s the law to make accommodations and they do it.”

Ackerman says RIT, like any college, has financial limitations. Often, they have to get creative with their approaches to accessibility. But she says she has never encountered a situation where she thought the law didn’t go far enough.

“This type of office is to make sure that people aren’t discriminated against due to their disability. So the law right now is written pretty clearly about that.”

But Doucette says the extra time and effort it took her to get her degree is by its nature discrimination. And where you come down on this has a lot to do with how you define accessibility.

“What is program accessibility? Some universities interpret it in a narrow way.”

This is Ed Steinfeld, he’s the director for the Center for Inclusive Design and Environmental Access. He says, accessibility is not just about physical space and building ramps and wide doorways. It’s about making a place where all people feel welcome and involved.

“Ultimately a university has to have a culture of inclusion, number one, and then they have to think about inclusion as including disability.”

Doucette did not feel included, so, when the time came, she decided not to pursue a PhD.

“I don’t know, is there room for radical black queers who are kind of fem in science? Like, at that point, I was just tired of constantly fighting for accommodations, and not knowing if that’s going to be your future. You just get really tired of fighting. I was like, I just want a steady paycheck. I want a cool apartment, cats, more cats…”

Today, Doucette still works in science. She is with the City of Rochester’s Office of Innovation, working with a team of people who use data analysis to tackle some of the city’s biggest problems, like poverty, public health, and access.