KEYSTONE CROSSROADS – Maegen Wagner wants her daughter to learn in the same classroom as everyone else.

It’s a simple goal that requires a lot of effort — even when there isn’t a global pandemic.

Her first-grade daughter, Elizabeth, has down syndrome, ADHD, and a condition called Oppositional Defiant Disorder. Her special education plan provides her with a speech therapist, a physical therapist, and a one-to-one aide that follows her throughout the school day. With that coordinated assistance, Elizabeth can function in a general education classroom and do a modified version of the work her classmates do.

“The main goal for Elizabeth was full inclusion so she would have that peer interaction,” said Wagner, whose children attend the Wilson School District just outside Reading. “[But] nothing is really inclusive any more.”

Since her district started online learning earlier this month, Elizabeth now gets a separate packet of generic “special education” assignments, said Wagner. Speech therapy has moved online. Physical therapy is, understandably, off the table. Elizabeth has limited, sporadic contact with her one-to-one aide, according Wagner.

These days, Wagner is serving as her daughter’s therapist, aide, and teacher — while balancing her own responsibilities as an educator in a nearby school district.

“I’m kinda left to figure out where they left off,” she said. 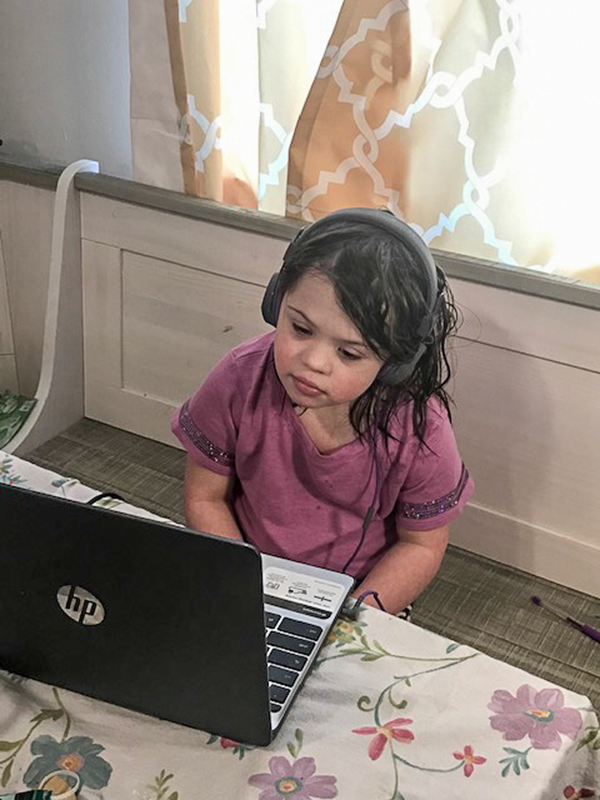 For a student like Elizabeth, there is no virtual program that can replace everything she received when she attended a brick-and-mortar school. As a teacher herself, Wagner has sympathy for district administrators trying to make a massive online pivot while also trying to live up to the promise of personalized special education.

“I’m not gonna be at their throats,” Wagner said.

The district, like many across Pennsylvania, is trying its best to “translate” individualized education programs (IEPs) for online learning, said Andy Hoffert, Wilson’s director of student support and services. He says some of the instructional aides that work with special needs children don’t have laptops or reliable internet services.

“There are varying levels of connectedness among support staff,” he said. “We’re trying to connect with kids as much as we can.”

At the same time, Elizabeth has a legally binding IEP that lists services she’s either not receiving right now — or receiving in limited form, according to Wagner.

Those are the essential questions facing thousands of special-needs parents in Pennsylvania right now. There are no easy answers.

From the moment school buildings closed in Pennsylvania, special education students have been in the spotlight.

Early guidance from the Pennsylvania Department of Education warned districts against offering virtual learning if they couldn’t guarantee the rights of English learners and special education students. That guidance led to reticence. Many school districts initially refrained from offering online instruction because they were worried they couldn’t equitably serve special education students.

In late March, the U.S. Department of Education sent districts scurrying in the opposite direction when it published a fact sheet that said, in bolded letters: “ensuring compliance” with federal special education law “should not prevent any school from offering educational programs through distance instruction.”

From there, Pennsylvania schools raced to move their operations online — hastened by news that came shortly after saying school buildings would be closed for the remainder of the academic year. Some districts made the pivot relatively quickly, while others — facing large technological hurdles — have yet to begin formal online instruction.

The latest state guidance tells districts and charter schools to ensure students’ rights to a free public education “as appropriate and reasonable for each student’s circumstances.” This will necessarily require adjustments. Some services for special-needs students almost certainly require face-to-face interaction.

“The question is, ‘Who gets to decide what’s reasonable and appropriate?’” said Judith Gran, a special education attorney in the Philadelphia region.

The worry, lawyers and advocates say, is that districts will use their legal latitude to offer limited support to special education students. They’re especially worried about families waiving their rights to individualized services.

The Twin Valley School District in Berks County sent a letter to families in late March explaining that its special education attorney had “developed a waiver form” to “help mitigate any … issues” that might arise as the district transitioned to online instruction. In an email, district superintendent Robert Pleis said he’d reviewed the district’s communications and that there was “no mention of a waiver.” When Keystone Crossroads forwarded the letter that contained the reference, Pleis did not respond.

“Under no circumstances are we seeking a waiver from FAPE [Free Appropriate Public Education] for our special education students during this period of school closure,” Pleis said in his initial email.

The Twin Valley case could be a misunderstanding or an isolated blip. But Gran, the attorney, worries that districts are communicating a similar sentiment “on a more informal level” — even if they aren’t asking families to literally sign their rights away.

It’s possible, she posits, that district officials are telling families in individual meetings that “you have to agree to what the district is willing to provide … as the price of getting anything.”

That’s a difficult claim to parse since special education plans are typically hashed out in private and on a per-student basis.

The state’s recent guidance tells districts how they should approach the tricky task of rearranging each student’s special education plan as instruction moves online. It says schools should provide all the services they were providing beforehand “to the greatest extent possible” and clarifies that districts can’t make any changes without notifying families individually.

Attorney Maura McInerney with the Education Law Center sees these latest guidelines as a big step forward — and believes many districts are now doing their best to provide as much as they possibly can to special education students. Given the progression of the last month — from no education to confusion around students’ rights to now — McInerney is optimistic.

“Increasingly, we have seen school districts working very diligently with parents to ensure that children with disabilities are not going to fall behind and regress during this time,” she said.

‘How much can we tolerate?’

It’s early, though. In Philadelphia, the state’s largest school district is still distributing Chromebooks to students and won’t begin formal, graded instruction until early May.

Special education attorney Dan Cooper says his firm has kicked around the idea of a class-action lawsuit based on Philadelphia’s month-long delay between closing schools and restarting them online. But he’s waiting first to see how special education instruction is implemented.

Cooper says he wants his clients to get some form of individualized instruction — not the same deck of work given to all students who have similar disabilities at their school. If districts meet that bar, he’s willing “to be lenient.”

There is at least one more legal shoe left to drop. The CARES Act stimulus bill, signed late last month by President Trump, gave the U.S. Department of Education 30 days to tell Congress if it needed to waive any part of the federal special education law. If the federal government enacts major changes, this conversation could evolve again.

There’s also the question of what happens when students are allowed back in school.

Updated state guidelines suggest that students with disabilities may be entitled to “compensatory” services to make up for whatever they missed during the shutdown. That could mean, for instance, a student who didn’t receive hands-on occupational therapy gets twice as much of that service when social-distancing guidelines are lifted.

It’s unclear right now how that process will work, and some attorneys worry there will be a backlog of requests. Big picture, advocates want schools to be vigilant about any regression special education students might suffer over the coming months.

“Let’s make sure that, when we come back in the fall,” said Cooper, “We are taking an extra close look at where these kids are.”