PA POST – The head of the Pennsylvania Department of Community and Economic Development said he’s not sure when the state will release the names of businesses that received waivers to operate amid the coronavirus outbreak.

“We’re working on that as quickly as we can. I just don’t have a timeline right now,” DCED Secretary Dennis Davin told lawmakers on Thursday during a  Senate hearing.

By the time the state closed the window for waiver applications on April 3, it had received 42,380 requests, a DCED spokesperson said. As of Wednesday, the state had approved 8,187 waivers, denied 18,875, and determined 14,662 requests didn’t require one.

But frustration with how that process was conducted was on display at Thursday’s hearing. Multiple business leaders and lawmakers criticized the governor’s waiver process for its lack of transparency and apparent inconsistency — with similar businesses receiving different results when they applied.

“This process was inconsistent to say the least from the get-go, and I worry that it may end companies,” Jon O’Brien, executive director of the General Contractors Association of Pennsylvania, wrote in testimony submitted to the committee.

The waiver process was launched with Wolf’s March 19 order closing more than 100 types of “non-life sustaining” workplaces, including most construction work, some manufacturing operations and many retail businesses.

News reports have described waivers being approved for construction projects that don’t appear to meet the definition of life-sustaining, including work on a casino in Philadelphia and the Mariner East pipeline.

O’Brien said waivers were granted inconsistently to contractors, and the state’s responses didn’t make it clear why waiver requests were denied. Others, he said, are still awaiting a response while impatient clients pressure them to return to work.

Another witness, Matt Stuckey, president of an auto dealership in Blair County, said he applied for a waiver three times and was denied. But he said he personally talked with three other car dealers who received a waiver.

Earlier this month, WHYY reported on a Pennsylvania car dealership that worked its waiver letter into advertisements.

On Thursday, DCED spokesperson Casey Smith said she didn’t know how many car dealerships received a waiver, but she said car dealers were sent a letter on April 1 to clarify that they cannot conduct in-person sales or leases of vehicles.

The department initially granted a waiver for the governor’s former kitchen cabinet and building supply company then withdrew it after Spotlight PA and PA Post asked how it met the life-sustaining criteria. The company’s CEO, Craig Danielson, later said it applied for the waiver as a precaution and would continue operating because it met other life-sustaining criteria. The governor is no longer a shareholder in the business.

In the weeks since the shutdown and waiver process began, Republican legislators pushed to ease the governor’s restrictions on employers, particularly for outdoor jobs like construction work. That pressure, in part, led Wolf to announce Wednesday that construction work can resume May 1. He also said the state would lift other restrictions beginning May 8 based on the volume of new coronavirus cases in different regions, and he’s currently targeting north-central and northwestern Pennsylvania as the first regions where many businesses, including retail, could reopen first.

Despite those moves, some lawmakers — on both sides of the aisle — continue to raise concerns about how the Wolf administration handled the business waiver process.

At Thursday’s hearing, state Sen. Kim Ward (R-Westmoreland) wanted to know who was making the decisions to grant waivers and what training they received. 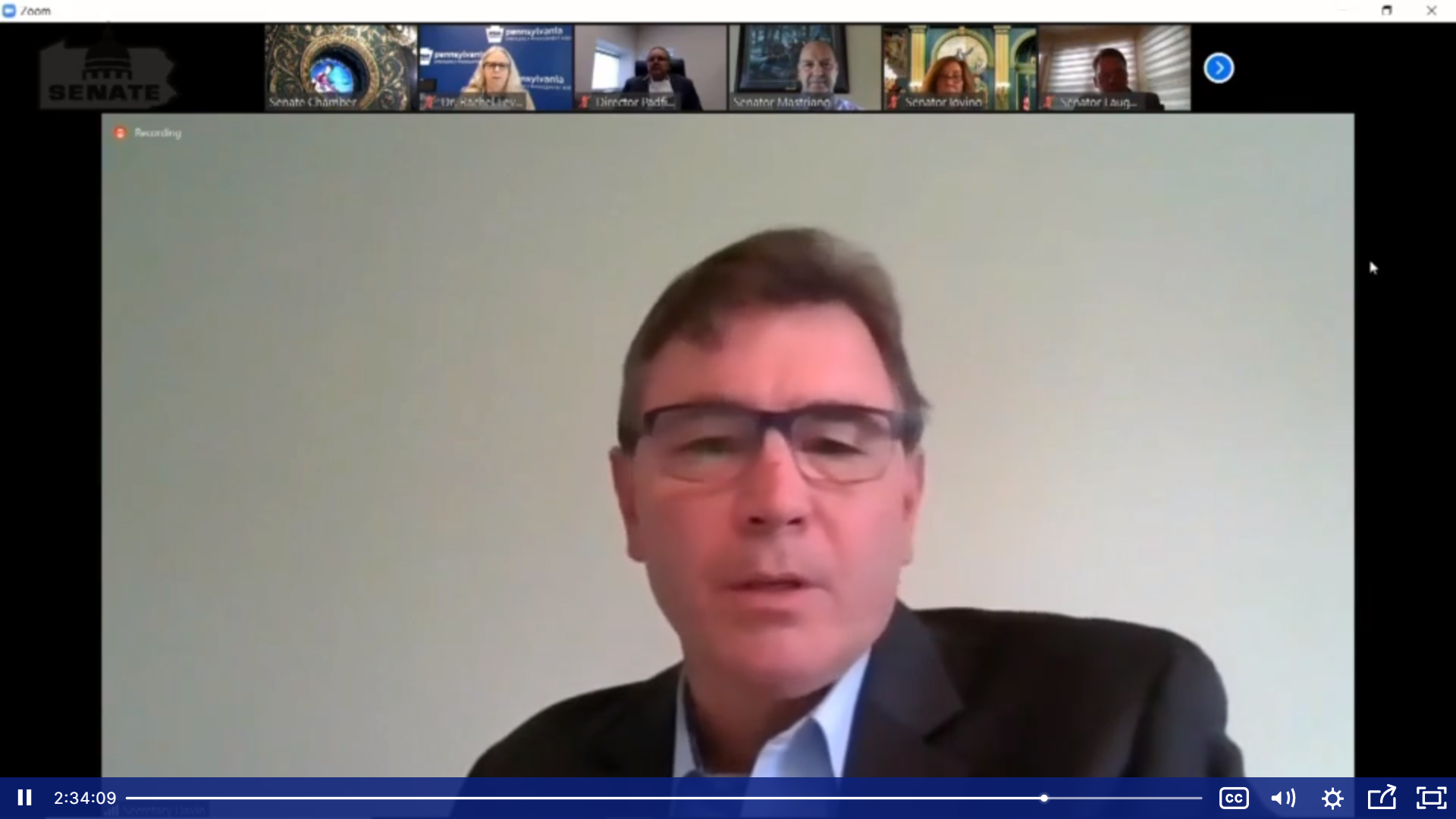 Dennis Davin, secretary of the Department of Community and Economic Development, testifies remotely during a Senate hearing on April 23, 2020. Ed Mahon / PA Post

“There’s so much discrepancy, and they’re not very uniform,” Ward said.

State Sen. Lindsey Williams (D-Allegheny) said small business owners in her district “have a lot of frustration with the opaque waiver process.”

“Picking winners and losers obviously is a very emotional event. And it puts a lot of power in your hands, as well as the governor,” Mastriano said.

He urged the department to provide lawmakers with a list of the waivers. He compared the secrecy around the process to the last scene in “Raiders of the Lost Ark”, where the prized artifact is boxed up and taken to a vast warehouse to be lost again.

“I feel like I’m stuck in this spot right now that the Ark of the Covenant is going down Area 51 while you have top men on it,” Mastriano said. “So please, could you give me a timeline?”

Davin, secretary for the department, defended the process to lawmakers.

He said about 40 to 45 state employees are reviewing the waiver applications, and he said those employees have a lot of experience working with businesses, including helping them receive loans.

“These are professionals that are doing this,” Davin said. “We’re not picking winners and losers. I refuse to even believe that people think that because it’s just not happening.”

Davin acknowledged that the system wasn’t perfect. He said two similar businesses might have applied for a waiver, but if they provided different information on the application it could mean one was approved while the other wasn’t.

In declining to provide a timeline for releasing the information, Davin said the department wants to ensure it provides good information that doesn’t reveal any proprietary details about businesses. He said department staff are reviewing the entire list to make sure the appropriate quality-control measures are in place.

“We’re putting together this information the best way we can,” Davin said.

Davin also noted the department is facing other challenges, including ensuring that businesses have the right personal protective equipment.

The legislature isn’t alone in not getting answers from the state about which businesses received waivers. The DCED is also not processing requests from citizens and media organizations under the state’s Right-to-Know Law.

The state’s Office of Open Records, which handles appeals when agencies deny access to records, issued guidance on April 2, saying agencies “should continue processing RTKL requests to the greatest extent of their ability to do so.” But it also said that days that an agency is closed do not count as “business days” under the state’s Right-to-Know Law.

Normally, the department would have five business days to respond to such a request, with the option to invoke an additional 30-day extension. The department told PA Post that a Right-to-Know request submitted on March 24 would be processed when the office reopens.

DCED’s Smith said there is no set date for when the office will reopen and begin processing open records requests.

The Pennsylvania Department of Health is also not processing Right-to-Know Law requests.

“I think one of the constant themes that’s come through this entire meeting is that there has been a lack of transparency and openness,” Regan said. “Pennsylvanians are nervous. They’re upset and they’re scared, and they would like to know, and they should be responded to.”

Levine said she would discuss the issue with the governor’s Office of General Counsel.

“I think that one of the issues is just the bandwidth of our attorneys who are working full-time on, you know, COVID-19,” Levine said.

The state Senate and House are still accepting and processing Right-to-Know requests, officials with the chambers said.