SYRACUSE (WRVO) – The SUNY Board of Trustees voted Tuesday to revoke an honorary degree awarded to journalist Charlie Rose in 2014 by SUNY Oswego.

Rose was fired by CBS in November after he was accused of sexual harassment and misconduct by several female colleagues. PBS also ended distribution of his television show. 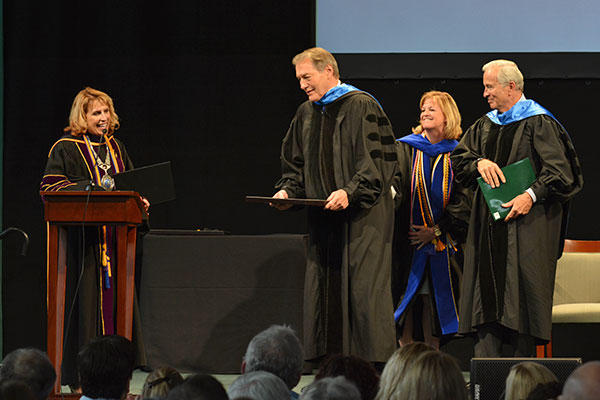 After the allegations surfaced, SUNY Oswego started the process to rescind the honorary doctor of humane letters degree it awarded him during his visit to campus in 2014.

In November, SUNY Oswego President Deborah Stanley said she was disturbed at the allegations made against Rose.

“These are credible allegations of predatory sexual harassment that completely conflict with the core values of our institution and significantly degrade the achievements that were the basis for awarding him an honorary degree,” said Stanley.

“SUNY is committed to fostering a diverse community of faculty, staff and students, in which all individuals have equal access to educational and employment opportunities free from sexual harassment and misconduct. Mr. Rose’s alleged misconduct violates the core principles upon which the university was founded and runs counter to the standards of mutual respect and professionalism that the university expects from all members of its community,” Johnson said.

This isn’t the first time SUNY has revoked an honorary degree. A degree awarded to film producer Harvey Weinstein by the University at Buffalo was revoked by the SUNY Board of Trustees last November.

A number of colleges and universities have revoked honorary degrees given to Rose, including Duke University, The University of Kansas, and Arizona State University.