SYRACUSE, NY (WRVO) – Syracuse University has placed more than 30 #NotAgainSU organizers on interim suspension, after they refused to leave Crouse-Hinds Hall after the building closed Monday night. The students occupied the building Monday, renewing their protests over the university’s response to more than two dozen racist and anti-Semitic incidents on campus over the last several months. The group also renewed its calls for four top officials to resign.

Crouse-Hinds Hall is where the offices of Chancellor Kent Syverud and other administration officials are located. In a statement released earlier in the day, #NotAgainSU again called for the resignations of Syverud, Dolan Evanovich, senior vice president for enrollment and the student experience, Department of Public Safety Chief Bobby Maldonado, and Associate DPS Chief John Sardino.

“This building houses the enrollment, admissions, and administration offices, which are directly responsible for the systemic problems we gather here to protest,” the group said.

Monday night, SU officials handed out flyers to students telling them they faced interim suspension if they stayed in the building past 9 p.m., when the building closed, a violation of the school’s code of student conduct. 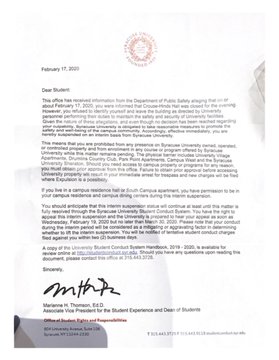 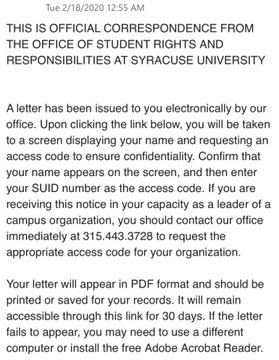 #NotAgainSU also released a list of new demands Monday, including the resignations of top SU officials, freezing tuition, and not allowing DPS officers to carry guns. Organizers said if their demands were not met by Friday, they would pressure SU’s Board of Trustees to take action.
In response, Keith Alford, SU’s chief diversity and inclusion officer, and Rob Hradsky, vice president for the student experience, released a statement to the campus community late Monday, saying university officials have engaged in “constructive, collaborative and respectful dialogue” over the last several months, and that the administration tried to engage #NotAgainSU in a “productive and respectful manner.” But, according to the statement, “a continued unwillingness by some to engage constructively, along with changing demands, challenge our collective forward progress.”
The statement said students were invited to continue their protest at Bird Library, which is open 24 hours, and to return to Crouse-Hinds Hall when it opened at 7 a.m. Tuesday. The officials said that invitation was declined.
“The students who failed to comply with vacating the building once it closed for the evening have been referred to the Office of Student Rights and Responsibilities for violating the Campus Disruption Policy,” the statement said. “To be clear: no students are being suspended for protesting.”
SU has moved all classes out of Crouse-Hinds Hall until further notice.
The group occupied the Barnes Center on campus for more than a week in November, after racist and anti-Semitic graffiti was discovered in several locations on campus. The group says university officials were slow to respond to the incidents, and did not alert students in a timely fashion. The group presented Syverud with a list of demands in November, and Syverud said he had agreed to most of them. But students presented officials with resignation letters in early December.
“Syracuse University administration’s handling of these crimes has been insensitive, lackadaisical, and an embarrassment. As student protesters, we have repeatedly been told to accept injustice, as it is reflective of ‘the real world,'” the group said in its statement Monday. “In order for systematic change to occur at Syracuse University, they need to be removed immediately.”