ROCHESTER, NY (WXXI) – Forty men and women in hospital gowns flitted in and out of the break room at the University of Rochester Medical Center with an energy at odds with their attire.

They were actors, technically called “standardized patients,” who were at URMC to help students prepare for some of the most difficult conversations they will ever have: giving a patient a terminal cancer diagnosis. 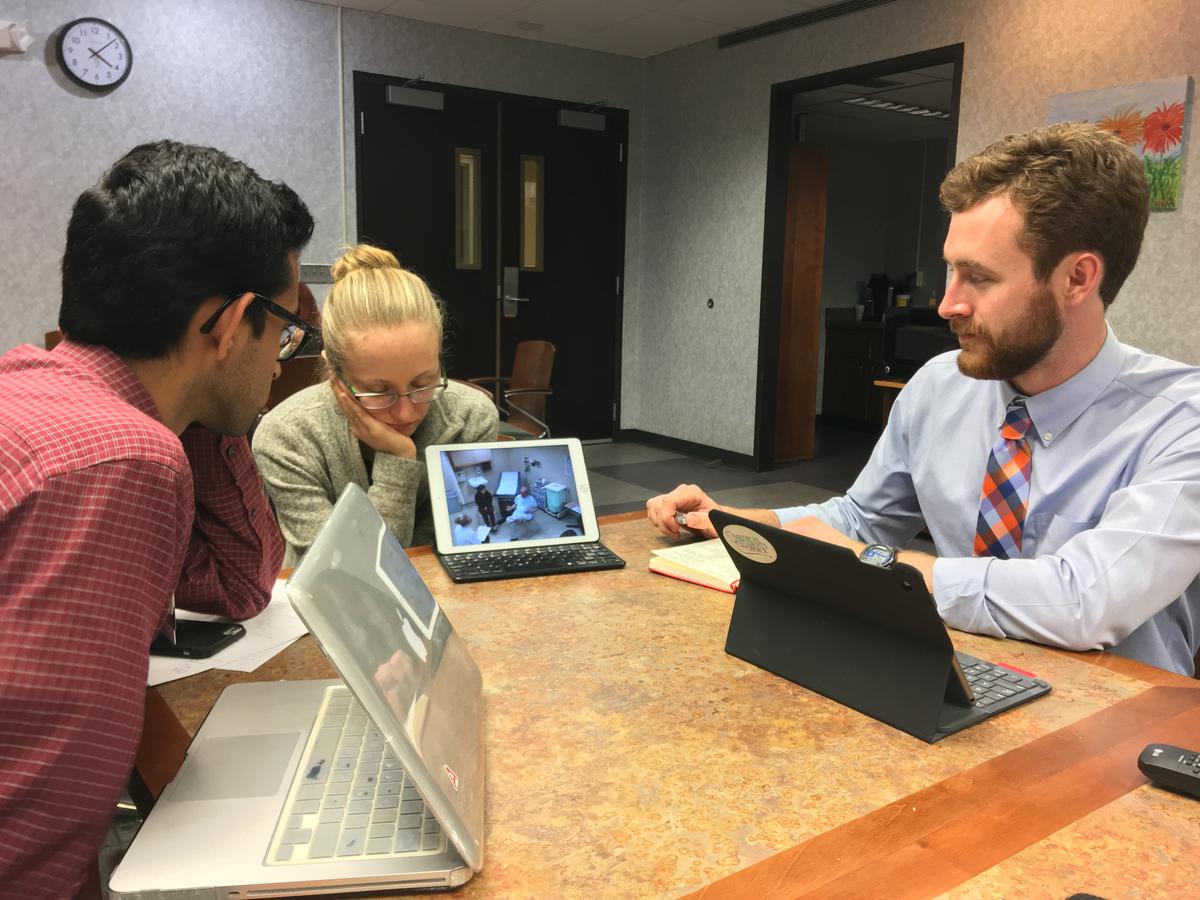 As medical students move through their four years of schooling, they sometimes miss out on the less technical, more emotional side of doctoring, said Rob Horowitz, chief of palliative care at URMC. He’s behind an effort to bring more empathy into their training.

The standardized patients at URMC this day were all playing the role of a person receiving a diagnosis of terminal, inoperable lung cancer. Their training instructs them to respond the way a real patient would: some cried; some acted numb; some told the students their diagnosis was wrong. After the simulation, they gave the students feedback.

Ralph Dutcher has been acting as a patient in these simulations for years. “We get a chance to go back and talk to them after the scenario and tell them what could be different, what should be improved, how I felt about it, how they felt about it,” he said.

Alap Patel, a URMC student, was assigned to patient Shirley Brown. As he entered the room where she was waiting, he wanted to make a personal connection. “How’s your garden doing?” he asked. Brown told him about all the vegetables she had planted and how her daughter was taking care of them while she was in the hospital. Brown was feeling good. “The pain is gone, and my breathing is great,” she told Patel.

Then, Patel broke the news.

“We’ll start with the fluid that we took out from your lungs,” he told Brown. “The fluid showed a certain type of cell. That’s important for us to recognize because it’s consistent with a diagnosis of small cell carcinoma, which is a type of lung cancer.”

Brown paused to take in the news. Then, she tried to grasp what the diagnosis meant. “OK, but it’s small cell, so that’s good news,” she said. “It’s not a large cell, so we can do something to get rid of it.”

“I hear where you’re coming from,” Patel replied after a beat, “but unfortunately it doesn’t quite work like that. It’s describing the type of cell, not the intensity of the cancer.”

Patel told Brown about the scans that showed her cancer has spread to her liver and her bones. She didn’t believe him.

“I think you’re probably reading it wrong,” Brown said. “Those can’t be mine. I gave up smoking cigarettes two years ago.”

As Patel and Brown talked through the evidence behind her diagnosis, Brown began to accept the findings. She asked about treatment options, and Patel found himself searching for answers. “That’s a very good question,” he said when she asked what radiation therapy would add to her life. “I hope that our oncology team will be better able to guide those discussions with you.” 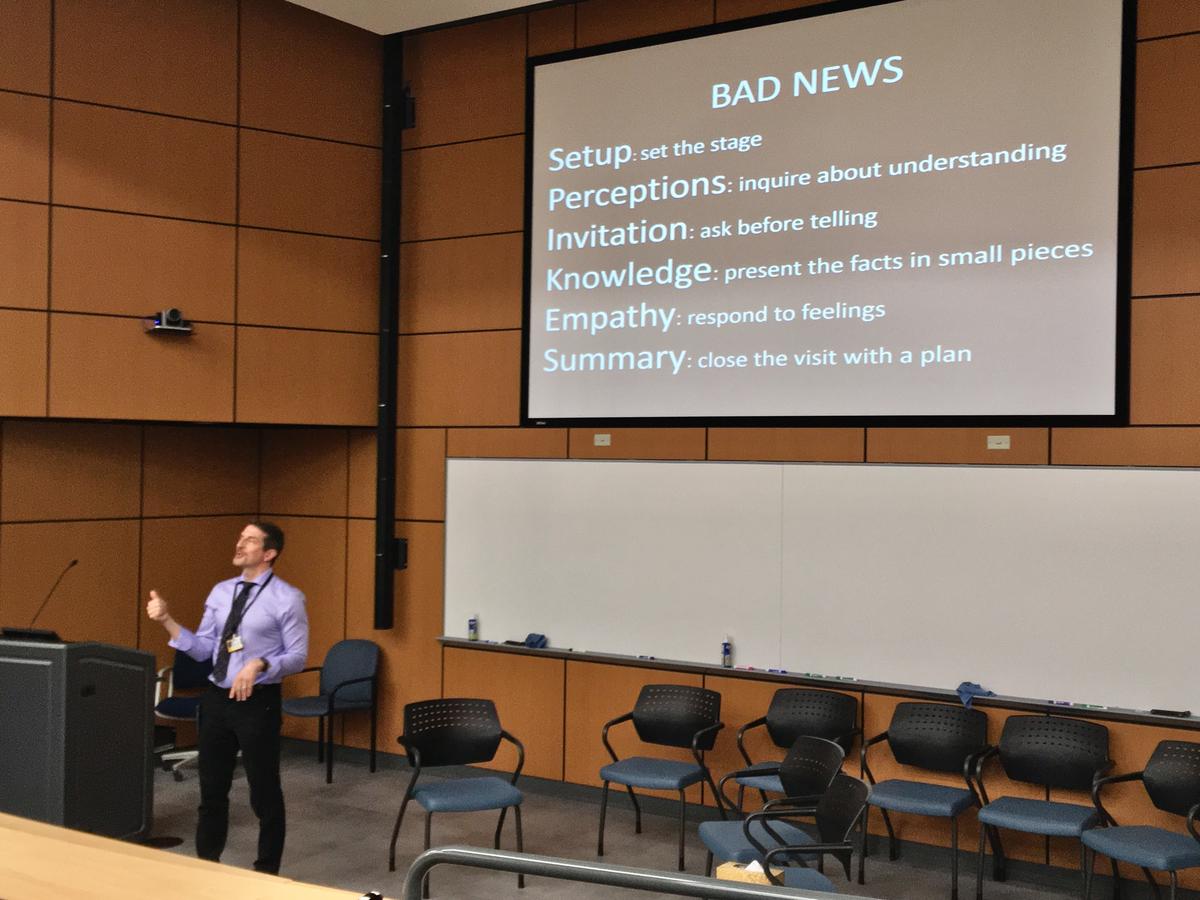 Horowitz, Patel’s professor, said he wants his students to get comfortable with not knowing all the anwers. When he debriefed with Patel after his encounter with Brown, he reminded him of their lessons in not-knowing.

Horowitz said the simulations are meant to help students understand that they can’t use a script to plan their conversations with patients.

“A lot of this work is being prepared for the unexpected and finding a way to respond that is still human and connecting and responsive to that individual,” Horowitz said. “That’s artwork, I think, and that takes a certain kind of practice and commitment.”

It’s a part of medical practice that Horowitz said is too often neglected. Schools focus on teaching students the technical sides of the profession: how to diagnose, how to prescribe, and how to keep charts. He said they tend to leave out coaching students on how to connect with patients on an emotional level, and how to make difficult news easier to bear.

Some students have an easier time with finding the emotional connections than others, Horowitz said, so after their own patient encounters, he has them meet in groups of three to watch a video of each other’s.

Patel met with Erin Schikowski and Brendan Prast, both fellow third-year medical students. They talked about how they broke the news to the patients, wondered together about whether (and how) to hold patients’ hands, and asked each other for suggestions on words that soothed pain.

Horowitz said the students were getting something that his own medical training lacked. “I didn’t get to do this,” he said. “I wish I had, so maybe this is the old guy growing up and building for the kids what I wish I had when I was a child in the training.”

The students were one day away from finishing their third year of medical school. With one year left before they earn their M.D., Horowitz said, continuing this sort of practice is key to producing knowledgeable, empathetic doctors.