SYRACUSE, NY (WRVO) – Department of Motor Vehicle offices across the state are expecting to be busier than usual the next few years as new federal standards for driver’s licenses go into effect. One central New York DMV office is gearing up for the extra time it takes to process these licenses.

The Real ID act, adopted in 2005, requires all U.S. residents to have a federally approved ID to travel on a domestic flight or enter a federal building by October 2020. Because this new REAL ID includes every name a person has had, and those names need to be documented, it has led to longer lines at the DMV, according Madison County Clerk Michael Keville.

“I’ve had two of my employees just standing, waiting, not able to do anything as the line continues to grow because one person is processing somebody through with all that scanning,” Keville said. 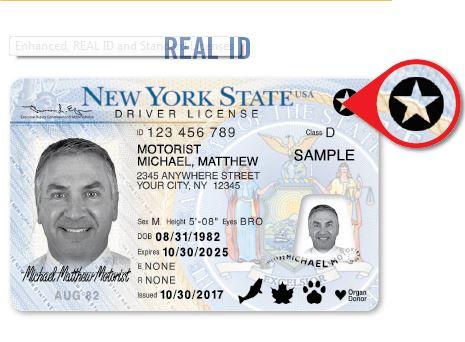 A Real ID will feature a star in the top right corner and starting in October 2020 will allow a person to fly on domestic flights and enter federal buildings. CREDIT NYS DEPARTMENT OF MOTOR VEHICLES

To avoid that rush, Madison County has purchased another camera that has been installed at the DMV office. Keville said it moves people through the process more quickly at peak times of the day because these new licenses require a new picture taken at a DMV Office. Keville said it is unclear what will happen to anyone not upgrading to either a Real ID or an enhanced New York state license.

“The Department of Homeland Security or TSA has not come out and clearly said what they will accept if a person has an unapproved driver’s license,” Keville said. “They may need to have their social security card with their driver’s license. It might be that simple, but we don’t know. So, we’re trying to encourage people to be prepared.”

While a Real ID will allow a person to fly domestically or enter a U.S. federal building, it will not allow someone to enter the United States from Canada, Mexico and some Caribbean countries. That requires either a passport, or an Enhanced Drivers License.

Learn more about the difference between a Real ID and Enhanced Driver License (EDL).