By the time dawn’s first vermilion fingers tickle the east’s black sky, hunters in a dozen-plus marshes have slogged, sometimes chest-deep, through marshes to arrive at blinds – often constructed, sometimes mostly natural – to await the arrival of ducks, large and small, drab and bright, slow and fast. 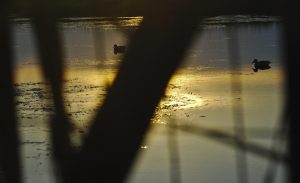 The View from a duck blind, Photo by Nate Littlejohn via coastguard.dodlive.mil

It’s the love of waterfowl, and the storied history of their hunting in Ohio’s marshes, and on water everywhere, really, that inextricably connects the pursuit of these birds to the preservation and restoration of the habitat that is necessary for their survival.

In the Port Clinton area last week, wildlife managers, conservation officials of every feather and private supporters gathered for the Ducks Unlimited 2018 Partnership Hunt.  For 17 years now, the ever-expanding marshes of a region once known as The Great Black Swamp have hosted the event, a brief gathering of those whose love of wetlands runs deep, sometimes generations. 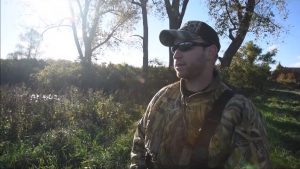 “My grandpa ran the Diamond Shamrock Marsh years before Besse (Davis Besse Nuclear Power Station) came along.  He had amazing stories about how many ducks there were back in the 60s and 70s,” Reinhart explained.  His grandfather was a seine fisherman (seine fishing involves a fishing net that is both weighted and buoyed) and truly aligned with the shallow waters of the Western Basin and its tributaries.  Property his grandfather owned was taken for the new power plant, constructed in the mid-70s.  “It broke his heart, but….”

And the but, Reinhart said, is that his grandfather and family friends loved waterfowling and the Lake Erie marshes so much that they stayed in the marsh game, just with different land and more marsh-making.  Friend George Trenchard is one of those folks who loves ducks and the land ducks love.  And he’s been adding water to land for decades, with over 240 acres now along the Lake Erie shore.

“The secret to creating a successful marsh is food and water control.  We’ve spent a lot of time building dikes,” Trenchard explained.  “My father was a big hunter and he asked the game wardens to locate property for him to buy.”  And he did buy land, just east of Besse. 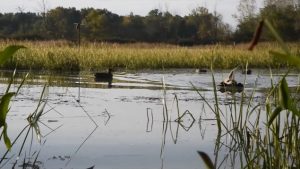 Trenchard takes advantage of programs that assist landowners in creating and preserving wetlands for migrating birds, including Ducks Unlimited projects.  And while he says he doesn’t like to kill ducks, he does enjoy eating a few now and then – especially wood ducks.

And, Trenchard admits, “Ducks are hard to shoot.”  In vouching for Trenchard’s claim, during two days of hunting during the DU Partnership hunt on two different Lake Erie marshes, a total of seven hunters took a total of two wood ducks.  And hundreds of woodies, mallards, geese and other waterfowl passed by, passed close, and teased hunters while staying well out of range.  But the main idea is good times with good people and keeping habitat available for all migrating birds, Trenchard said. 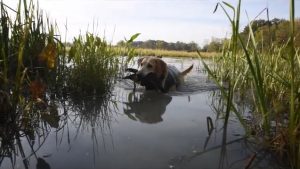 And, of course, good dogs like Boom.  Trenchard recalled fondly a four-legged associate who retrieved every bird every time, no matter what.  “He was amazing, a great dog, a great friend.”

The waterfowling community is unique in North America, in that its quarry moves from as far as South America to northern Canada each year. Other game species are not so migratory, and mostly stay put.  Ducks Unlimited’s partnerships north and south of U.S. borders help protect, preserve and re-establish both breeding grounds and feeding and resting habitat for birds.  Lori Stevenson coordinates private lands projects for the U.S. Fish & Wildlife Service. She says public-private projects are first-order when it comes to conservation of wetlands.

“Migratory birds, their habitat and threatened species are paramount,” she explained.  “In Ohio, basically from Western Lake Erie to the Pennsylvania line is a focus area.”  While there are other areas in the state the USFWS works on, she said, the Lake Erie watershed is one of the main areas.  And anything her office can provide, including free consulting, they will.

“Most everyone I talk to just wants to get habitat restored or preserved,” she said.  “They want to be in some type of partnership so they can get things done.”

Stevenson, whether through consulting with one of her biologists or working directly with landowners, gets dry land turned to wetlands and helps private owners improve migratory bird habitat.  “The more partners we can get to the table the better things are going to get.” 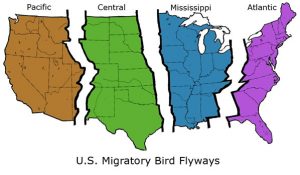 North American waterfowl use four flyways for their annual migrations, with the Great Lakes situated in the most heavily traveled one, The Mississippi Flyway.  DU has helped conserve more than 1.6 million acres of waterfowl habitat in this flyway alone, with most of it coming from small projects, from a few acres to a few dozen, one at a time.  U.S. Department of Agriculture programs like CREP (Conservation Reserve Program) and WRP (Wetlands Reserve Program) are among many that conserve and restore farm land to marsh habitat for decades and often in perpetuity.

As a lone muskrat glides through the water attending to its morning routine, the small patch of millet still holds its blue-gray frost as the sun begins hauling itself up.  Eagles and hawks arrive, survey the scene below while the woodies that have been flying past, far out of shooting range, have tucked themselves, nearly a hundred, in the nearby creek for protection.

“There’s a 30-year WRP project on about a dozen acres right here on Packer Creek,” explained Tim Goetz as we sat in his blind with his yellow lab named Lil, patiently awaiting the arrival of ducks within range.  Our calling does not seem to help.  “I tell people you don’t have to sign up the whole farm, just the wet holes.”

“Sometimes, farmers just don’t get it”

Sometimes, Goetz said, farmers just don’t get it.  Instead of seeding areas prone to flooding and producing little if any grain, why not go with a program that will rent the lands from you?  “You spend less on seed and fuel and your production goes up, it’s a no-brainer.”  Just across a tree line, another 60 or 70 acres is wrapped up in a conservation easement, providing guaranteed habitat in the future. 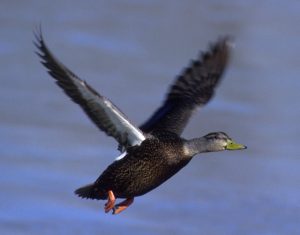 An American black duck in flight, Photo by usfws via wikimedia

Conservation easement programs essentially pay farmers and other landowners to leave wetlands wet, including portions of agriculture fields that flood, or hold water, on a regular basis.  Programs like these are meant to expand the offerings to migrating birds, always on the prowl for water to land on, eat on and rest on as they make their long journeys north and south each spring and autumn.  Even the tiniest water holes can offer hundreds of ducks the rest and nutrition they need.

And while waterfowlers with hunting backgrounds are one of the greatest resources for wetlands habitat’s future, sometimes non-hunters jump into the game.

Mike Haar, a fifth-generation farmer in Sandusky County, just south of Lake Erie, said he didn’t grow up hunting and just never has.  “But I love the wildlife,” he said. “I’m not against hunting, I just don’t do it.”  Haar said he allows a few others to hunt on his land.

He farms about 300 acres, and relatives whose property adjoins his farm about 5,000 acres.  Haar said he’s got CREP easements on portions of his land.  “In my opinion, it was just too wet to farm,” he said of the acres he transferred to the program.  Haar said he’s more interested in habitat for deer, foxes, pheasants, raptors, waterfowl and other critters than he is in trying to squeeze every last penny out of soggy farmland.

“It’s easier to budget a set price from the government than to farm a piece that might produce a profit every ten years, if it happens to be dry enough one year,” he said.  “And honestly, if we’re not turning something into trees or wetlands or other habitat for my grandchildren or someone else’s, what’s the point?”