KEYSTONE CROSSROADS – On a recent sweltering afternoon, Akeem Dixon and Christine Brown stepped out of their North Philadelphia office to do something that’s become increasingly rare during the COVID-19 shutdown: in-person outreach.

Talib Abdul Mujib is the owner of 1617 Barber Shop and Beauty Salon on Cecil B. Moore Avenue. (Kimberly Paynter/WHYY)

Step One: get some face time with the business owners, and especially the minority business owners, along a stretch of Cecil B. Moore Avenue and tell them about a new $200 million state grant program to help small businesses hurt by the shutdown.

Dixon and Brown both work for Beech Cos., a suite of organizations that includes Beech Capital — one of 17 community development financial institutions (CDFIs) working to distribute the program’s grants, ranging from $5,000 to $50,000. At least half the funds from the COVID-19 Relief Statewide Small Business Assistance program will go to minority business owners. The first application window closed in mid-July; another is expected to open next month.

Step Two: get those businesses to commit to applying. That’s harder than you might think: Black and Latinx business owners have been hit harder by the pandemic than their white counterparts, but have been less likely to receive federal aid. That disconnect has bred distrust, which has made it difficult to get shutdown aid money to the businesses that need it most.

‘It takes me a long time’

Two blocks west of the Beech headquarters is Hue Food Market, a neighborhood staple for people looking for sushi, hoagies or a soda.

Owner Que Su Yun, known as “Mr. Q” by his employees, had plenty of time to make small talk with Dixon and Brown that afternoon: His main moneymaker, sushi catering for groups affiliated with nearby Temple University, as well as sports-watching parties, had dried up to practically nothing since March. 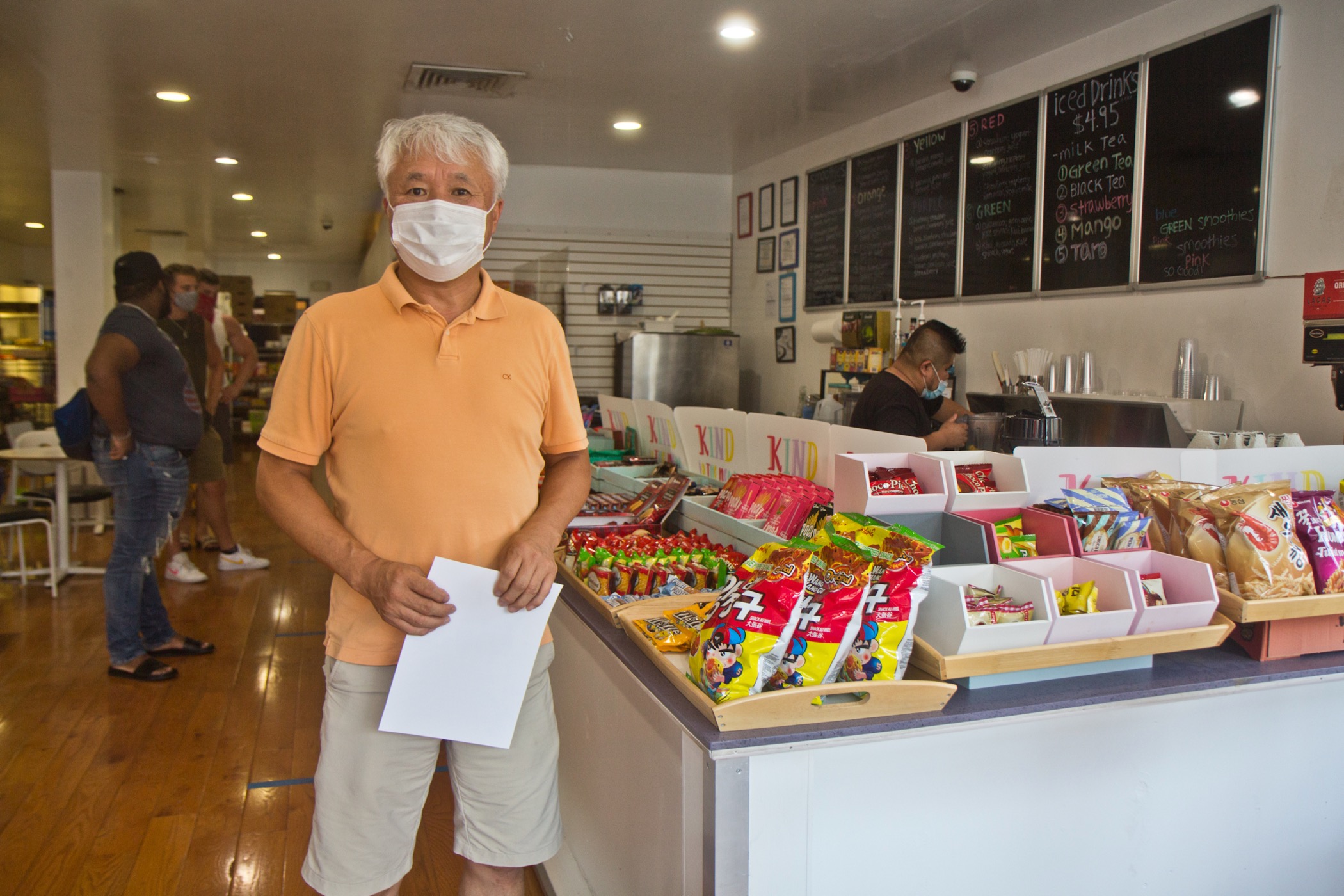 Yun has applied for aid during the coronavirus shutdown, but with mixed success. He received some money from the federal Paycheck Protection Program, but not as much as he hoped for. He never heard back from the Philadelphia Small Business Relief Fund. The online applications, Yun said, are tough for him.

Yun hadn’t heard of the new state grant program until Brown pressed a flyer into his hand. But he trusted the Beech workers — they had helped him apply for other grants, including one year earlier that financed a flooring renovation.

“The Beech company … they send updated news. Directions. What I have to do, why should I do it,” Yun said. “That’s helpful.”

This time around, a few days after the visit, he had his application in.

‘They’ve been taking from us forever’

A few steps down from Hue Food Market is 1617 Barber Shop and Beauty Salon. When Dixon and Brown knock on the door, owner Talib Abdul Mujib is there, wearing a cotton face mask and a chain with a miniature barber pole in the center, but the row of barber chairs is empty. Mujib, 58, has been allowing only a few people in the shop at once since they reopened a few weeks ago. The shutdown hit his finances hard, forcing him to put off rent and bills for months.

“I didn’t have anything, because I couldn’t earn anything,” Mujib said.

Still, Mujib has been reluctant about seeking financial help. Wells Fargo denied him a loan when he was first starting out, he said, and since then he’s been skeptical about interacting with financial institutions at all. He’s even refrained buying a house to avoid having to take out a mortgage — noting that Black homeowners were hit hardest by the 2009 housing crisis in Philadelphia.

“Who doesn’t, in the Black community, have distrust for the banks?” Mujib said. “What are they going to give me something for? They’ve been taking from us forever. … I just don’t trust the system.”

But slowly, through chats in-between cuts, Brown and Dixon convinced Mujib to take a shot at going for a piece of the pie. He said he will apply for the new state grant program; he already received some PPP funding, thanks to their cajoling.

“I would never have applied if they hadn’t come and talked to me about it,” Mujib said. “They emphasized to me: Why don’t you take advantage of some of the things that are out there for you?” 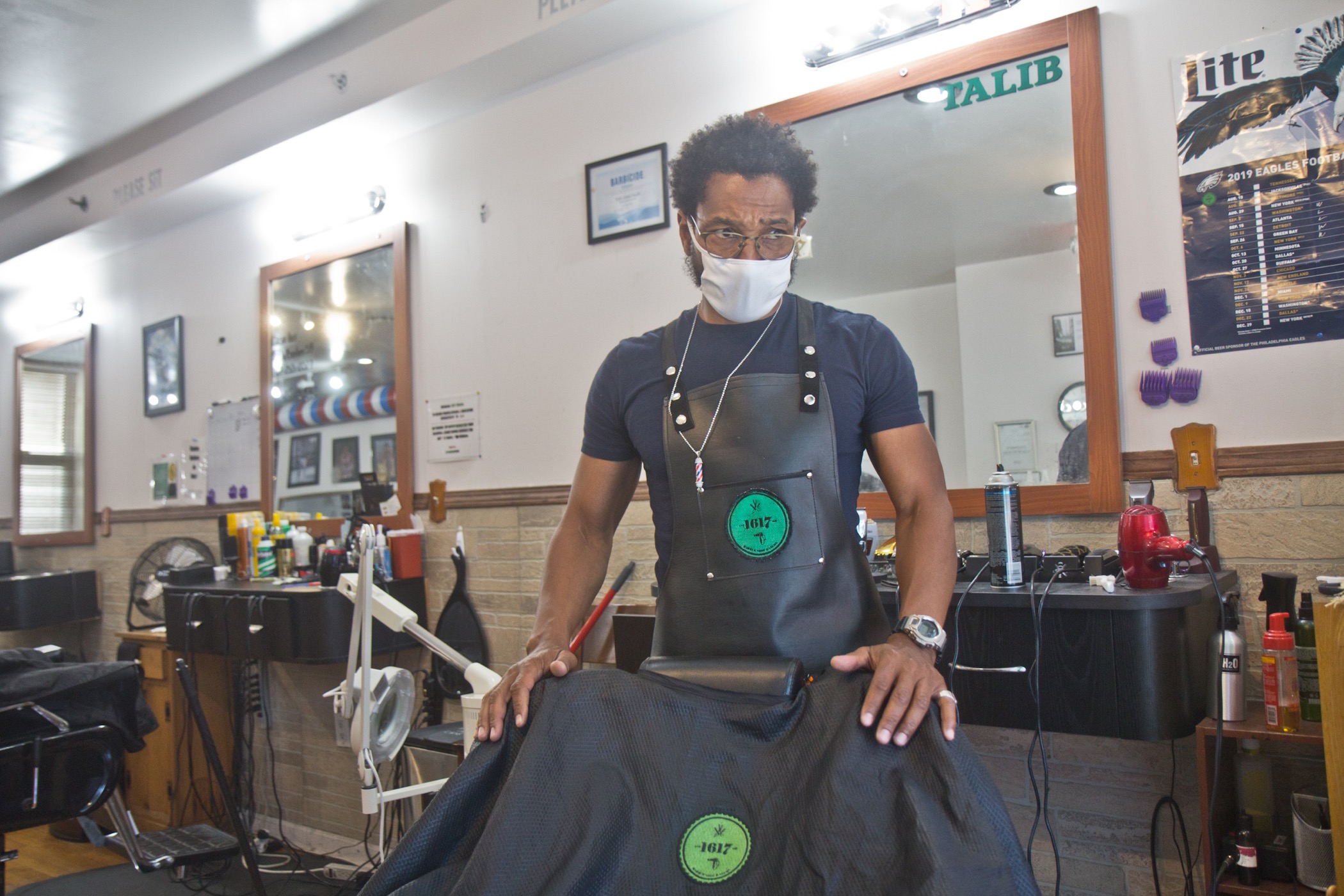 The coronavirus shutdown hit Mujib’s finances hard, forcing him to put off rent and bills for months. (Kimberly Paynter/WHYY)

‘This is for you’

Experts say this kind of outreach — visits or phone calls with lots of follow-ups — is crucial to reaching minority small business owners, who often face a slew of challenges to obtaining aid that their white counterparts do not.

Pennsylvania officials chose to route the grant money through CDFIs, rather than traditional lenders, because their mission centers on underserved markets that have historically been shut out of mainstream banking. Ken Scott, president and CEO of Beech Cos., said his employees have visited or contacted at least 1,200 businesses and independent contractors in Philadelphia, Delaware and Montgomery counties to pitch the grant program since early June.

“I don’t know how many large commercial banks are going to sit with you and actually walk you through a loan application process,” Scott said.

The state will use federal stimulus funds to pay CDFIs a fee equaling 3% of the value of each grant application processed and approved, according to a spokesperson for the Pennsylvania Department of Community and Economic Development. That money does not come from the individual grants themselves.

Unlike the PPP, this program is not first-come, first-served — an aspect of the federal program that ultimately favored larger small businesses that had strong relationships to bigger banks. Instead, applications are being graded on a scorecard based on criteria such as whether the business owner has low or moderate income, and where the business is located.

Still, many small business owners who want to apply have a difficult time doing so, Scott said, because they lack access to computers or their records are not in order.

Another major barrier for many minority business owners is taxes. Most public grant and loan programs — including this relief package — require businesses to either be current on their taxes or on a payment plan. Many minority small business owners don’t have easy access to capital, and some struggle to stay compliant with taxes, insurance and licenses, said Maura Schenker, director of the Small Business Development Center at Temple University’s Fox School of Business.

“Philadelphia, in particular, runs a very large informal or gray economy, where people may not have a business license or may be working under the table,” Shenker said. “So [that creates] a lot of issues.”

A spokesperson for the city said it has allocated extra workers to meet increased demand from business owners seeking to become tax-compliant.

Finanta, a North Philadelphia-based CDFI that primarily serves Latinx people, has been holding Spanish-language webinars and posting on social media to convince business owners to apply for the state grant. Even so, many of them have been hesitant, said Kersey Azocar, senior vice president of microlending.

“You have to make yourself available because even with our own clients … they are like, ‘Oh no, I don’t think I qualify,’” Azocar said. “I am, like, ‘Yes, you do! This is for you.’”

That skepticism stems, at least in part, from a long history of minority business owners having less access to financial assistance — a fact that hasn’t changed in the COVID-19 era. A national survey conducted from late April to mid-May found that just 12% of Black and Latinx business owners who applied for aid from the federal Small Business Administration received what they asked for. By contrast, a survey of all small businesses by the Census Bureau conducted in roughly the same time period said three-quarters of them had asked for a Paycheck Protection Program loan, and over half had received one.

Recently released PPP data analyzed by the Economy League of Greater Philadelphia shows that, in the city, 12% of loan recipients identified as Black, although only about 7% of businesses reported racial demographic data.

“There’s been hundreds of years of financial redlining, and it persists to this day,” said Economy League executive director Jeff Hornstein. “The scant evidence we have at our disposal suggests this is probably the case right now, too.”