Janine Fortino and the Worship Team at the Lighthouse Mexico Church of God in Oswego County celebrate mass each week with several parishioners who carry loaded weapons to protect the congregation. PAYNE HORNING / WRVO NEWS

SYRACUSE (WRVO) – When the parishioners at one Oswego County church gather for worship each week, many of them are armed. And it’s no secret. The Lighthouse Mexico Church of God even advertises that its not a gun-free zone – a response to the frequent mass shootings in the country that’s the subject of some debate.

Walking into the church on a Sunday morning is more like joining a family reunion than attending a mass. Music plays for the first half of the service as the parishioners move about the church greeting one another and joining in community prayers. The pastor Ron Russell says his church is like a family, and it’s his responsibility to ensure their safety.

“Pastors are commissioned by God – I believe by God – to protect their sheep,” Russell said.

Russell cares for his flock with a loaded gun, as do several members of his congregation.

“Even when you walked in you had no knowledge, and I’m not going to identify who the young ladies were, but they had you pegged,” Russell said. “And they said, ‘Either he’s a reporter or he’s a stranger with a bag and we’re going to watch him.’ They were all armed.”

Russell has encouraged his people to bring their firearms to church since 2013 when Dylan Roof walked into the Emanuel African Methodist Episcopal Church in Charleston, South Carolina and killed nine people. The church places that no gun-free zone advisory on its website, warning anyone who might target them. 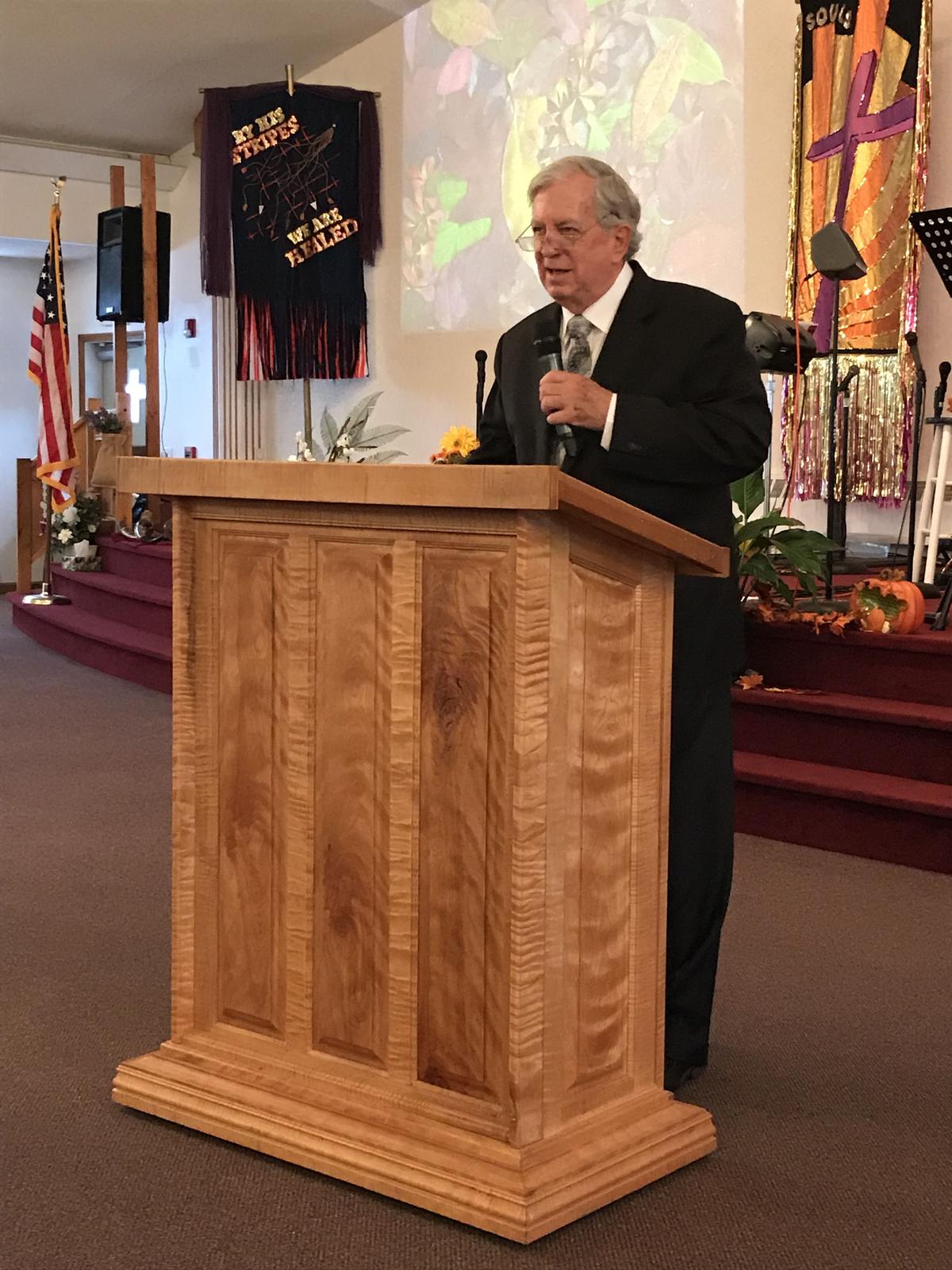 Ron Russell, pastor of the Lighthouse Mexico Church of God, encourages his congregation to arm themselves at his services. The policy is intended to warn potential mass shooters and to make the congregation feel safer about worshiping at his church. CREDIT PAYNE HORNING / WRVO NEWS

“If it’s out there, ‘wait a minute churches are starting to arm themselves’, then it’s going to put a question mark in those people’s minds that want to cause a shooting,” Russell said. “Are they going to come to this church where they know – and you had probably five or six armed people in this church today – or are you going up the street where, you know, well that church up there, they don’t have nobody? Where are they going to go? They aren’t going to come here to be challenged.”

Janine Fortino, one of the church’s singers says the policy makes her feel safe.

“I’m very vulnerable up there and knowing that I’m taken care of and protected is a very good feeling,” Fortino said.

“There have been some studies of the statistical likelihood of an armed civillian actually being able to provide meaningful help in such a situation, it’s vanishingly small,” Spitzer said. “You almost can’t measure it.”

Spitzer says well-intentioned civilians with guns who try to thwart mass shootings typically add to the mayhem and confusion for police.

“Armed civilians are amateurs and they are more likely to fire a stray shot that will harm somebody unintentionally,” Spitzer said. “They may lose their weapon, they may mistake an armed perpetrator from another person who is trying to help. There are lots of ways – more ways – that things can go wrong than can go right.”

But Russell says his people know what to do. He has brought in Oswego County sheriff’s deputy Michael Gaita for several training sessions. Gaita says some may not think that more guns are the answer, but as more people in the country stock up on weapons after each shooting, they should at least be educated.

“I’d rather train him and his people so that they know what they’re doing instead of just having regular Joe Citizen out there waving a pistol around because I know how the cops are going to respond because I train them,” Gaita said.

Police response is part of the reason Russell says he adopted this policy. The minutes it can take law enforcement to arrive on the scene can be all it takes for a shooter to massacre a crowd.

But Gaita cautions anyone who wants to replicate Russell’s method. The way to beat this he says is prevention. That’s why his business focuses on how to spot potential warning signs rather than teaching people how to shoot a gun.

“If I can train you what to look for, then you can get involved and stop it from happening because when the police respond it’s too late,” Gaita said. “I’m responding.”

By and large, Spitzer says churches are not encouraging their parishioners to bring guns. He says most are responding by hiring a security guard or off-duty police officers. But after an armed civilian in Texas chased away a mass shooter at a church last year, pastors like Russell feel vindicated in their approach.