SYRACUSE, NY (WRVO) – Access to health care is important for individuals overall physical, social and mental health. But there are barriers for many Americans according to the Office of Disease Prevention and Health Promotion — including the high cost of care, inadequate insurance coverage (or no coverage at all), or lack of available services.

Dr. Lehmann works to treat homeless individuals in Syracuse, functioning as their primary care doctor. IN MY FATHER’S KITCHEN

Summer can be a tough time of year to lose weight. Family reunions, barbecues and festivals all mean tasty treats that can be hard to ignore. That’s why Gloria Martin likes the Diabetes Prevention Program offered by the YMCA of Greater Syracuse.

“Keeping me focused and giving me ideas of what’s good and what’s bad,” Martin says.

The group of about 10 individuals — all trying to lose weight with the goal of preventing diabetes — gather on a midsummer afternoon, with tales of galumpkis and potato salad.

“A lot of the at-risk people who need this program are low income, and they just can’t afford the program.”

The group offered ideas to fight the temptation, like exercising more beforehand or eating smaller portions. These small classes offered by the YMCA all over central New York have worked so far, according to the Senior Healthy Living Director, Jessica DesRosiers.

“About every year we see 75 people or so come through the program,” DesRosiers says. “And on average we see a six percent weight loss from the participants.”

And doctors say losing between five and seven percent of body weight is one of the key ways to bring down your risk for diabetes, a disease the American Diabetes Association says costs the health care system $327 billion last year. DesRosiers would like to expand the YMCA program, but there is a barrier — cost. That will change this fall when the program becomes Medicare-eligible.

“I think that really removes a huge barrier for us that we’ve seen over the last few years, because a lot of the at-risk people who need this program are low income, and they just can’t afford the program,” DesRosiers says.

The YMCA of Greater Syracuse is the only one in the country that’s Medicare eligible, and other Y’s across the country are watching. If it works, DesRossiers sees more potential for expansion and maybe even Medicaid jumping on.

“The whole goal is to do this with the rest of our programs. Blood pressure, falls prevention, arthritis program. The idea is to get them on this list and they’ll be treated for prevention without payment,” she says.

Prevention is also on the mind of Dr. David Lehmann, a physician at Upstate Medical University in Syracuse. A couple times a week, he jumps in vans operated by homeless outreach organizations. 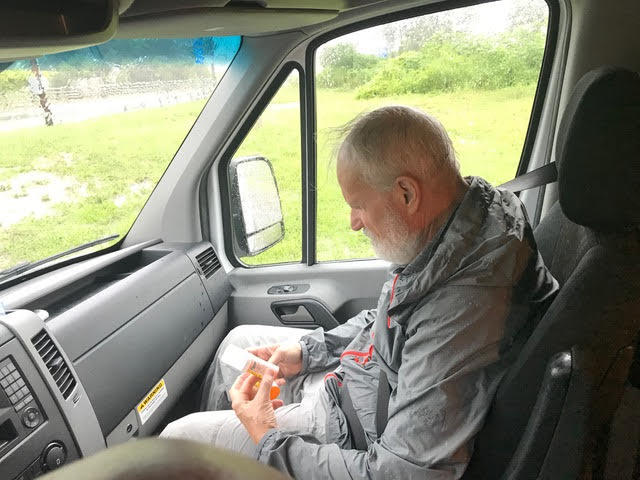 On this soggy summer day he welcomes a homeless woman into the van run by a nonprofit called In My Father’s Kitchen and does a quick blood pressure check.

The problem is, for many of the individuals who camp in wooded areas or underneath highway bypasses, access to this kind of medicine is sketchy at best. While they may have insurance, the one key to getting prescriptions or treatment is having a primary care physician.

“A lot of these guys don’t have doctors. They’ll be dropped from clinic because they’re homeless and they have no means,” Lehmann says. “They can’t make it to the clinic. And if you no show a couple of times and they say ‘Well, you know, you can’t be a patient here anymore.’”

Because of this fact, Lehmann has become the primary care doctor for several homeless individuals in Syracuse.

There’s also a high rate of drug addiction and mental illness within the homeless population.

“When I touch a patient, and meet eye contact … the human bond can really occur.”

So when the van comes across a gaggle of guys underneath a bridge and ask if they need to see a doctor, one man immediately points to an abscess — an infection caused by injection drug use. Lehmann says he, like many others, won’t seek treatment.

“He won’t go to the ER or urgent care clinic because every time he goes, he gets labeled a drug addict and gets yelled at. And he I’m sure has not got the greatest personality in the world. I’ve been on the other end of it, and I get it and I get the reticence of emergency department physicians and hospital physicians. But nevertheless, he will not go, and let this thing fester and it will go into his heart and his bones.”

And ultimately cost the health care system thousands of dollars.

Lehmann and the crew of In My Father’s Kitchen will come back later in the week to conduct some minor surgery in the van to help treat the abscess.

These kinds of street doctors fan out in many cities, from Los Angeles to Pittsburgh. For Lehmann, meeting these people where they are is key and dealing with them respectfully may be the most important treatment of all.

“People knowing that we care about them; we make eye contact. And knowing they are loved. Because the stigmatization of people on the streets are complete unloving. When I touch a patient, and meet eye contact, it just kind of melts away and the human bond can really occur.”