ROCHESTER, NY (WXXI) – A new Siena College poll covers a range of issues, from what New Yorkers think of the fall of the Amazon deal in Queens, to vaccinations and marijuana legalization.

Steve Greenberg, pollster at Siena, says a majority of voters in the state think it was a bad idea for Amazon to cancel putting a second headquarters in Queens.

“Two thirds, 67 percent say it was bad for the state. It’s across the board. 64 percent of city voters, 69 percent of downstate suburban voters,” Greenberg said.

Greenberg says that New Yorkers across the board seemed to think that seeing Amazon pull out of the deal was a bad idea. And when asked who they blamed, that decision landed on the city’s newest congressional representative. 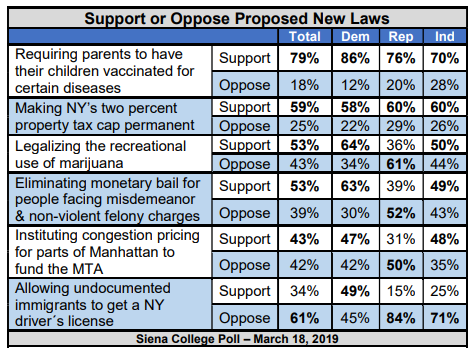 79 percent of New York state voters also said children should be required to be vaccinated before attending school’ regardless of religious beliefs.

53 percent of those polled by Siena also support legalizing recreational marijuana in the state.