TRANSFORMING HEALTH (WITF) – For years, the state has paid employers who hired people with intellectual disabilities, encouraging companies to bring people aboard who otherwise might not find jobs.

In May the state reduced the amount it gives those companies, and now it’s facing a lawsuit from people who say that decision could hurt people with disabilities and the companies that hire them.

But the lawsuit alleges that the policy is cutting off needed money and that it might force people with intellectual disabilities into situations that aren’t right for them.

Scott Schwartz is one of those people. The 43-year-old from Philadelphia has a genetic disorder known as fragile x syndrome.

Scott can’t count or spell, but he works about 20 hours a week, packaging products such as bags of cough drops and beverage cans. He works at a company licensed to hire people with disabilities, sometimes referred to as a sheltered workshop.

His father, Theodore Schwartz, said his son’s job has given him purpose and self-esteem.

“The key is structure,” Schwartz said. “Private companies can’t promise that kind of structured employment, where my son can thrive.”

The father and son are plaintiffs on the lawsuit, along with a nonprofit advocacy group and Scott’s employer, Associated Production Services.

That company’s 500-person workforce is made up almost entirely of people with developmental disabilities. Without state funding, it would lose $432,000 per year and would likely go out of business, Schwartz said. 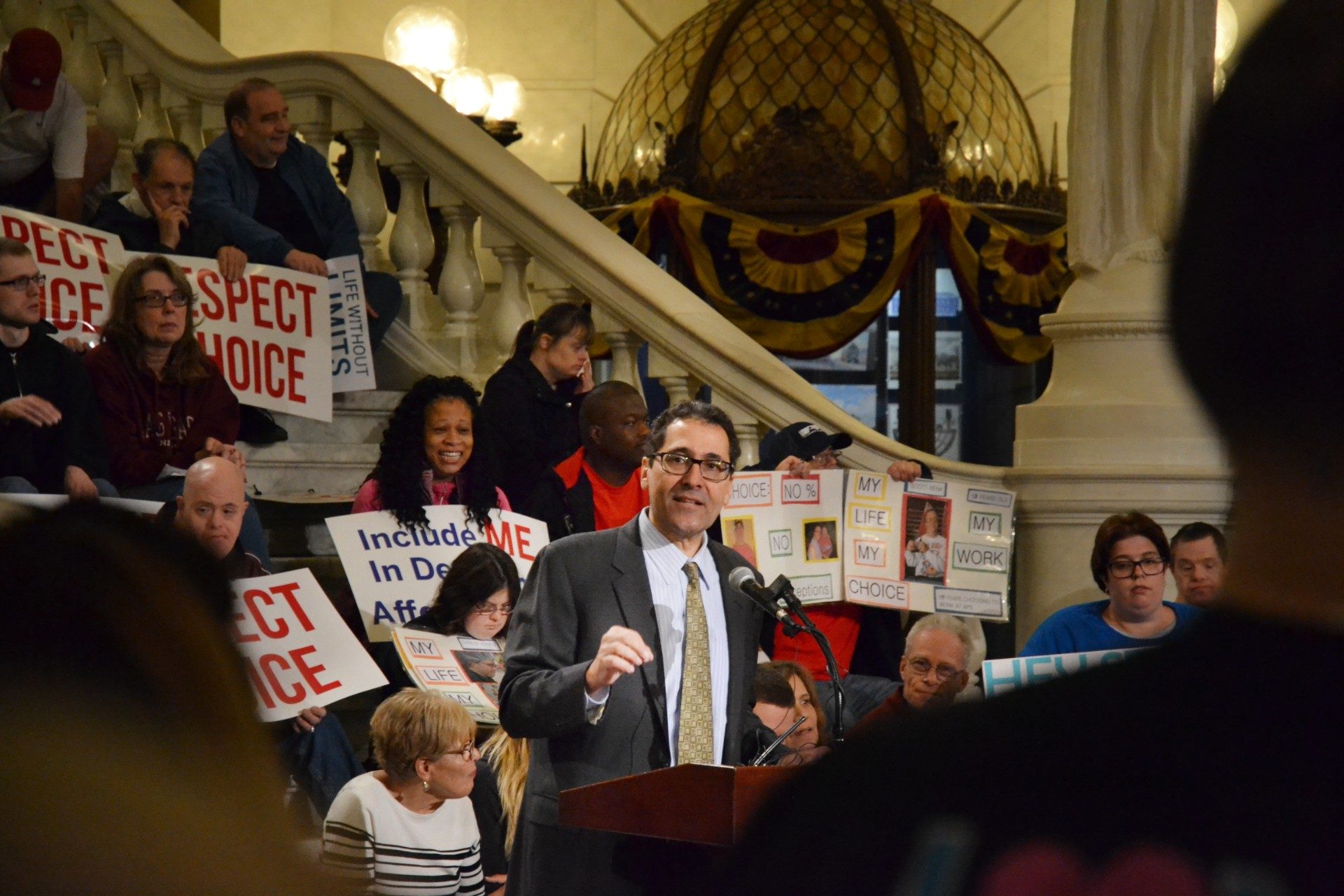 Under the change in state policy, funds that used to go to companies like Associated Production Services are earmarked for service providers that meet certain requirements to get people with intellectual disabilities out in the community.

With the change, providers get more money for each person with an intellectual disability who spends about two hours during the day at a community space such as a park, mall, coffee shop or library.

The lawsuit aims to reverse or modify that policy change.

The state’s goal is to get disabled people out in the community as much as possible, said Department of Human Services spokeswoman Erin James.

“These services have been changing for many years as both DHS and the federal government seek ways to be more inclusive of individuals with disabilities receiving services in community settings,” James said in a statement.

That’s a good idea in theory, but the policy change will have unintended consequences, said Richard Edley, CEO of Rehabilitation & Community Providers Association, a nonprofit that is also a plaintiff in the suit.

Some people with intellectual disabilities also have profound physical disabilities, Edley said. For some, spending that much time traveling to various places “is almost medically contraindicated,” he said. Others simply may not want to have their daily routines interrupted so frequently.

Theodore Schwartz’s wife, Linda, said her step-son doesn’t deal well with change, like many people who are on the autism spectrum. He has worked at his job for 19 years, after failing to adjust to five other jobs in the community.

The idea of him losing his job and being required to make daily excursions into the community worries her.

“He has anxiety issues, and that’s a big deal when he’s in new surroundings,” she said. “It’s like it wasn’t thought out.”