HARRISBURG, PA (WSKG) – Though a final U.S. Supreme Court on a key abortion case is not due until later this year, both state leaders and primary candidates for governor have made clear how they would pursue state policy changes should justices jettison the ruling.

Pennsylvania’s abortion laws would remain in place if the Court votes to overturn its decision in Roe v. Wade. A leaked draft of a forthcoming opinion that was confirmed by Chief Justice John Roberts appears to show a Court willing to toss the decades-old ruling.

Justice Samuel Alito opined that the Roe decision was “egregiously wrong” from the start and that states ought to be able to expand or restrict abortion access however they see fit. 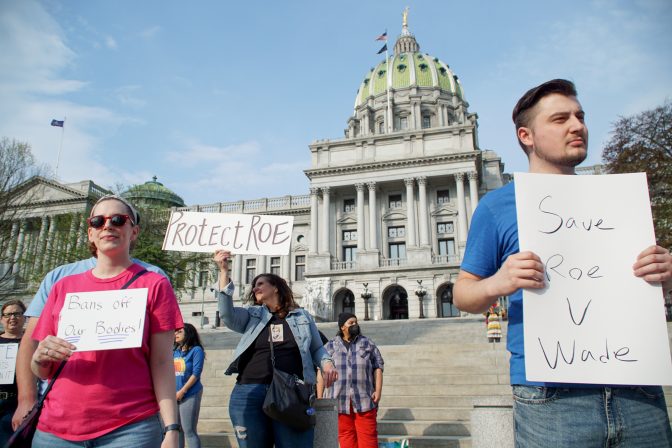 Jeremy Long / WITF. More than 30 people gathered outside of the state Capitol on May 3, 2022 to protest the leaked draft U.S. Supreme Court opinion that would reverse Roe v. Wade.

Even with Roe in place, Pennsylvania is among the states that have regulated abortion on their own. Under its decades-old Abortion Control Act, pregnant women in the Keystone State have to consult with a doctor at least 24 hours before an abortion, and minors have to obtain a parent’s permission.

Standard health insurance can only pay for abortions after a sexual assault, incest, or to protect a pregnant person’s life, though Pennsylvanians can buy extra coverage for the procedure. Those three conditions are the only ones under which pregnant women who are 24 weeks or longer into their pregnancies can obtain an abortion.

All Republican primary candidates for governor say they support abortion restrictions – including some, like leading candidate and state Sen. Doug Mastriano, who would make no exceptions. Mastriano noted in a televised debate that he introduced legislation several years ago banning the procedure after six weeks of pregnancy and would push lawmakers to move “with speed” to pass such legislation if elected.

Gov. Tom Wolf and his potential Democratic successor, Josh Shapiro, both have said they would veto new abortion restrictions.

“We’re for legislation that protects the dignity of human life throughout all stages and our legislative agenda has reflected that,” House Republican spokesman Jason Gottesman said.

The House already approved a bill with some Democratic support that would ban abortions if a fetus is diagnosed with Down syndrome. Another bill in the Senate that had been shelved until a few weeks ago would cut state funding for healthcare providers that perform abortions. Another that stalled in that chamber would cut any “right to abortion or funding for an abortion” out of Pennsylvania’s constitution.

Gottesman said it’s too soon to share what House Republicans might do next if the Roe decision is overturned. He did not confirm or share specifics about a “Post-Roe Strategy Summit” meeting that a Democratic state senator alleges recently took place in a House conference room.

“By the time there’s another governor, there’ll be a new General Assembly. So, we are going to be continuing to look at what’s in front of us now…and then we’ll deal with tomorrow tomorrow,” Gottesman said.

“I believe life starts at conception, so we should start protecting life at conception,” Corman said. “But if the woman’s life is in danger, then that’s a decision she needs to make.”

“The legislature has not been allowed to have this discussion because of Roe v. Wade…the next legislature will have to weigh in,” he added.

Democrats are hinging their hopes of preventing further abortion restrictions on both electing Shapiro to the Governor’s mansion and on winning more seats in the House and Senate in November. Rep. Emily Kinkead (D-Allegheny) said she wants to “educate” her colleagues that are either undecided or willing to side with Republicans on abortion.

“It impacts women’s ability to succeed in other areas of their lives. Their ability to choose if, when and how they have children impacts everything else,” Kinkead said. 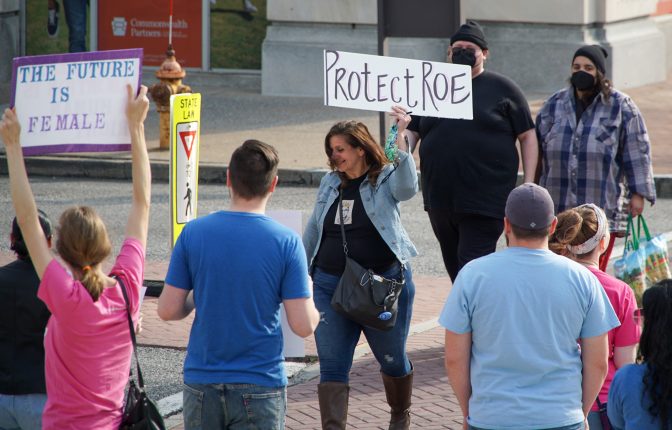 Jeremy Long / WITF. More than 30 people gathered outside of the state Capitol on May 3, 2022 to protest the leaked draft U.S. Supreme Court opinion that would reverse Roe v. Wade.

House Democratic Leader Joanna McClinton (D-Philadelphia) said Republican lawmakers should be willing to consider her party’s stance on abortion given where some have stood on pandemic policy.

“If Republicans continue to be in the majority in both chambers, there needs to be conversation about the folks who were the loudest about ‘my body, my choice,’ as it related to masks, as it related to preventing a public health crisis” McClinton said.