It’s the latest stress the industry has faced since COVID-19 turned the child care sector upside down in March.

When Gov. Tom Wolf ordered most of the state’s child care centers to shut down for two weeks that month to slow the spread of the virus, Erinn Rinn didn’t waste any time.

Rinn, who is the operations director of child care providers in Delaware and Chester counties, spent the rest of the month frantically reading up on safety protocols and rearranging classrooms — anything she and her staff could do to safely reopen in April.

But, when April rolled around, the child care centers were still closed due to state orders. May came, then June: they remained closed.

“Every week we thought we would open soon,” Rinn said. “We were always waiting.” 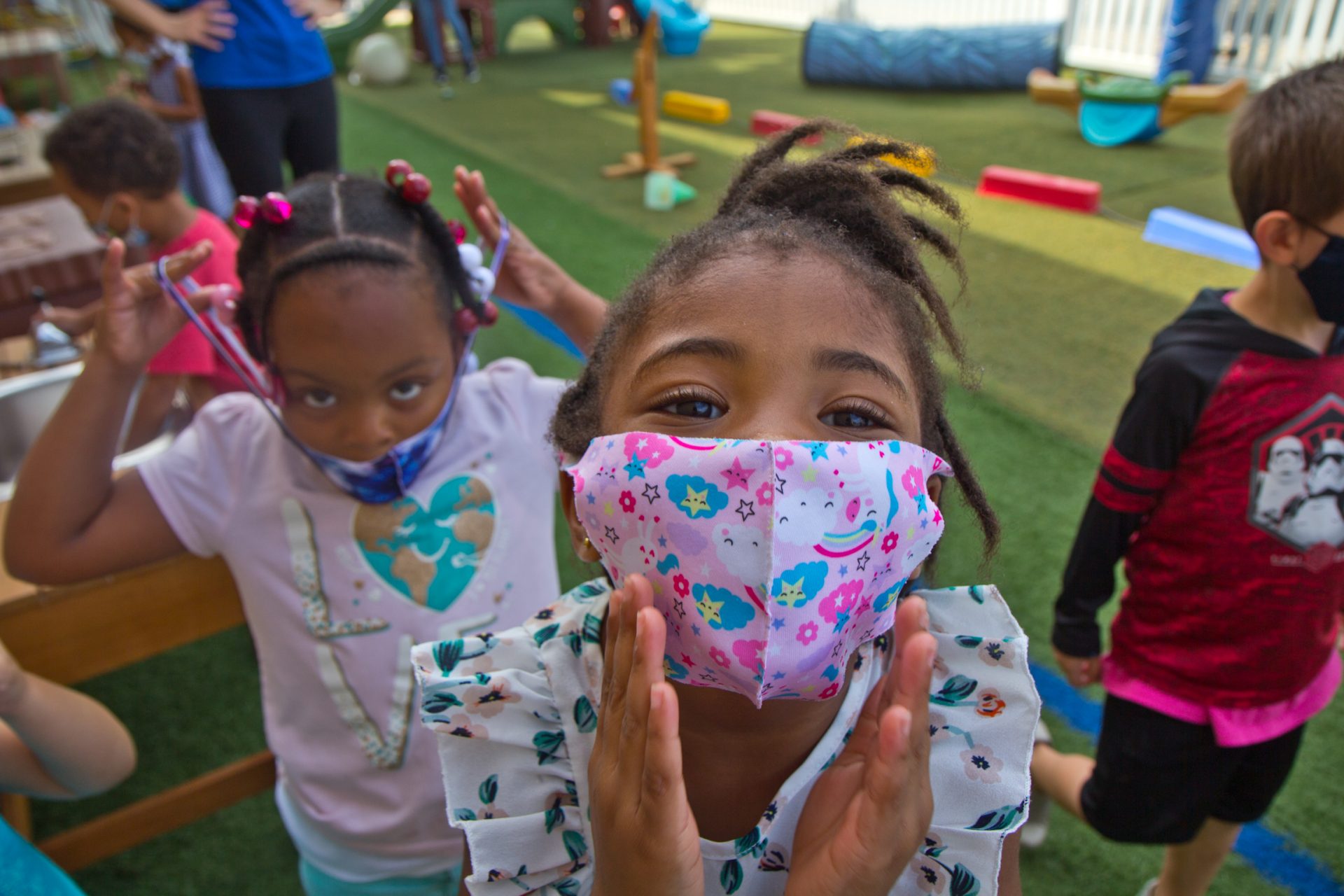 Kimberly Paynter / WHYY. Kids at Today’s Child daycare in Clifton Heights, Pa., are instructed to keep their masks on during outside playtime.

The providers finally opened their doors in mid-June, but demand is nothing like it once was. Currently the two child cares, which largely care for kids from low-income families, have a combined enrollment of about 600 kids — less than a third of what it was pre-pandemic.

“A lot of people have lost their jobs,” Rinn said. “Other parents are working from home … or they are just scared.”

But now that financial lifeline is disappearing. Pennsylvania officials have announced that, starting this month, child care providers will only be paid for kids in attendance.

Pennsylvania’s Office of Childhood Development and Early Learning (OCDEL) made the change in hopes of routing funding more logically as they anticipate a flood of working families rushing back to child care as many school districts begin the year fully or partially virtual. 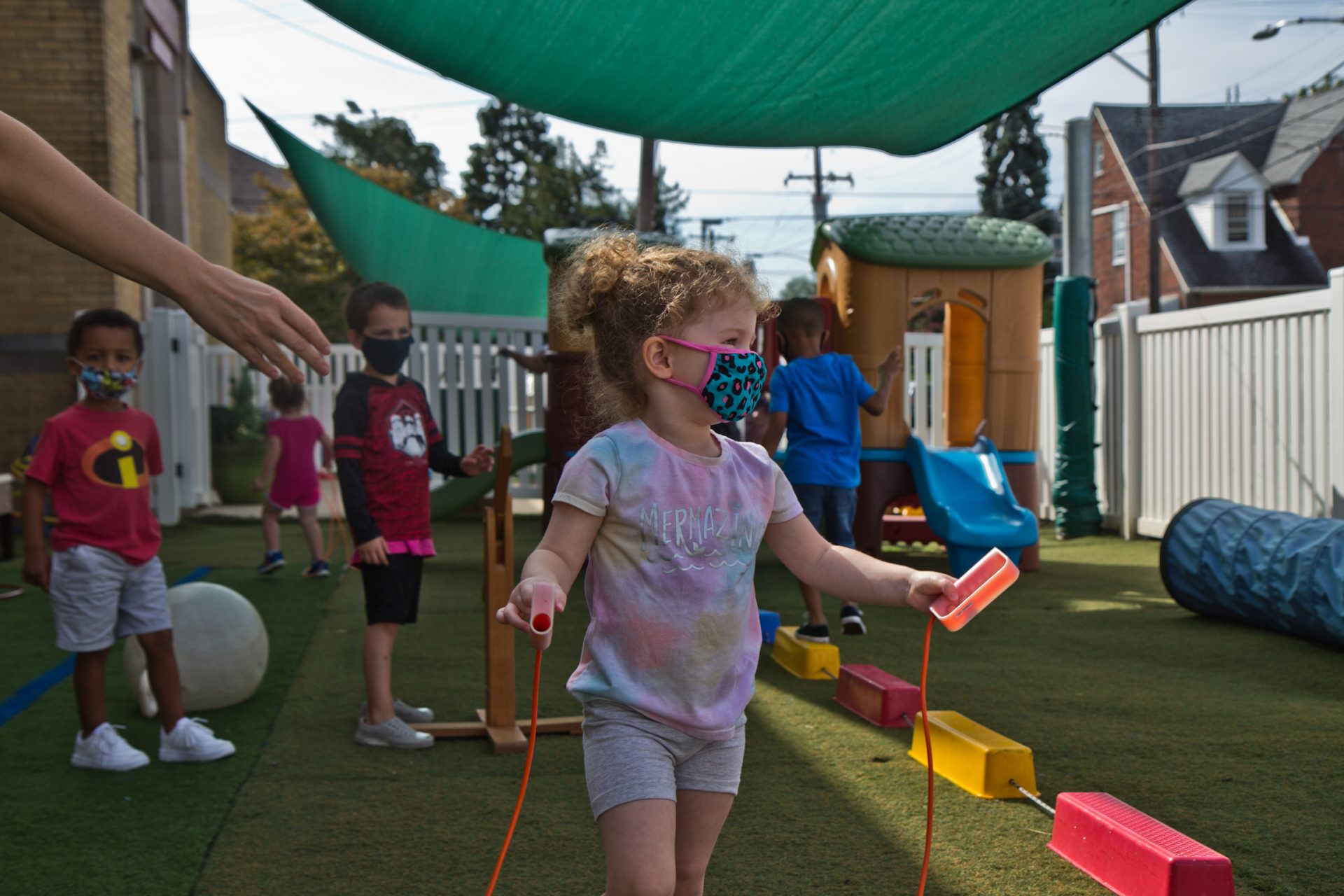 But industry advocates say there is no evidence this rush is happening yet, and they worry the change will cause many providers, already struggling with increased costs related to the pandemic, to collapse. The fear in the long term is that post-COVID, when parents and the larger economy will need the child care sector the most, it will have been too fundamentally damaged by the events of this year to meet the need.

Rinn estimates her income will fall by 75% next month, when she’ll get her first reduced payment.

‘We have never been in this situation before’

State officials downplay the potential negative financial effects of this policy change on providers, arguing that their open seats will soon be filled up by school-age children who need care.

Child care providers and industry advocates say that demand might be coming, but it is not here yet.

“What we are hearing from providers directly is they are not seeing their doors banged down by families looking to send their children,” said Donna Cooper, executive director of Public Citizens for Children and Youth. 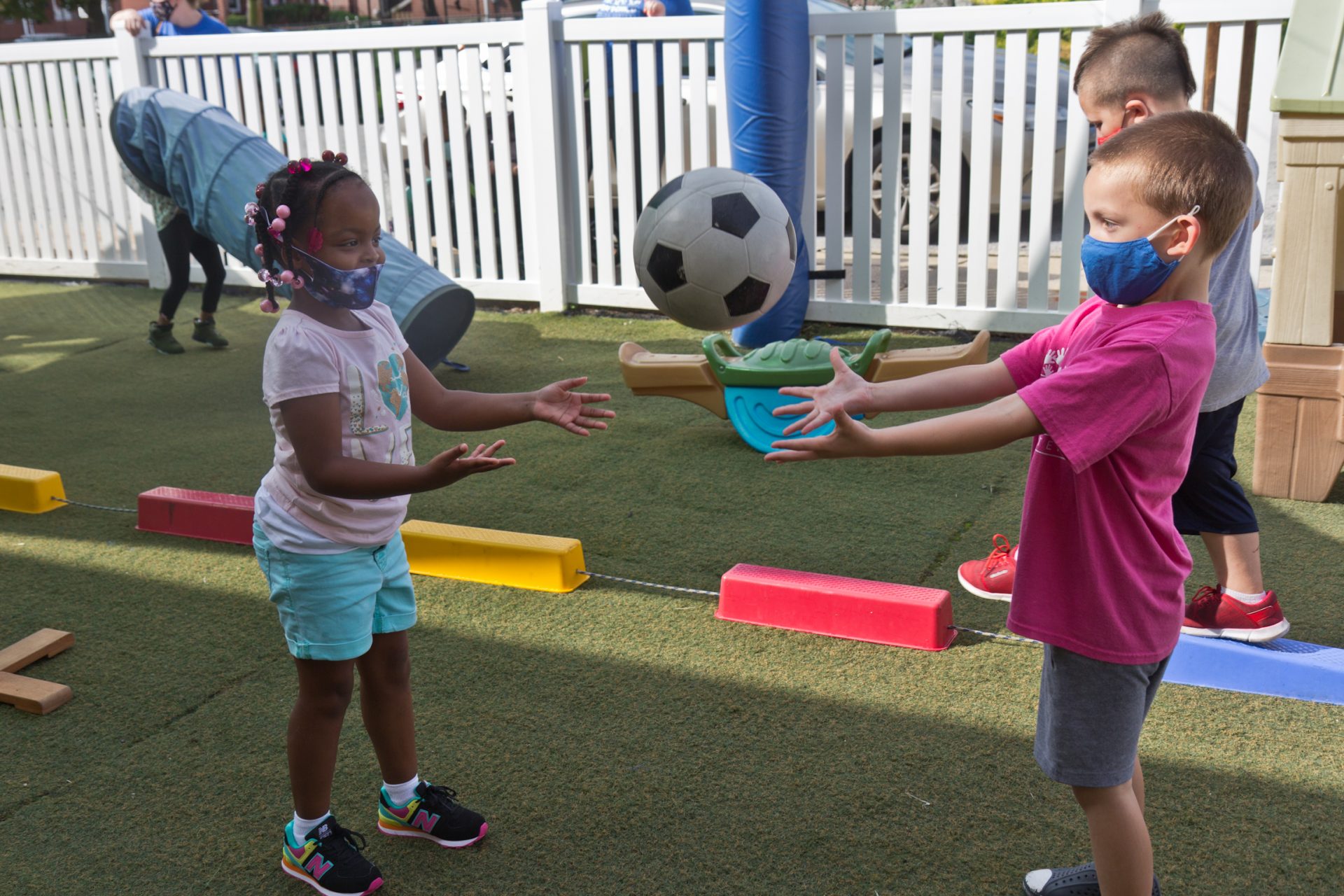 That’s the case for Nikishia Morgan, who runs Kingdom Kiddies II child care out of her home in Southwest Philadelphia. All 11 of the children she had enrolled in early March were subsidized through Child Care Works. So far, only seven have returned.

“My families don’t even buy masks: I give my kids masks every day,” Morgan said. “I’m just concerned that once this now goes into effect — will I be able to sustain?”

State numbers back up the notion that there isn’t overwhelming demand for child care right now. As of late August, there were 324 children on the state’s subsidized child care waiting list, according to state data reviewed every month by PCCY. In August 2019, it was 7,588.

The policy change will likely hit smaller child cares in urban areas hardest. While government subsidies make up about a quarter of the state child care industry’s annual income, providers in areas with a high concentration of low-income families lean on those subsidies far more, Cooper said.

“Some providers, it might be 90% of their money,” Cooper said. “Philadelphia, Pittsburgh, Erie, Allentown [have] a higher concentration of providers that are very dependent on state subsidy payments.”

Many of those providers have been struggling to survive even with subsidies, including an added lifeline from Congress through the CARES Act, which has given $220 million to Pennsylvania’s child care sector. In a recent survey of the state’s child care industry conducted by Penn State Harrisburg, more than a quarter of providers reported dipping into personal savings to pay expenses, and nearly a fifth said they have been putting bills on credit cards.

Cooper wants the subsidies to continue at pre-pandemic levels until at least October, when attendance numbers for the school year should be clearer. Hundreds of child care workers and their allies have written Gov. Wolf and local legislators as part of a campaign to convince them to continue the funding.

“We have never been in this situation before,” Cooper said. “We shouldn’t make policy as if we have.”

‘The whole child care infrastructure is really at stake’

Kim Follet would be happy for an influx of school-age children, but it hasn’t come yet.

Follett is CEO of Play and Learn, a child care provider with ten centers in Montgomery County. Attendance has dropped by more than half since the pandemic started, and they have already had to temporarily shut down one center due to lack of demand.

Follett is confident that, eventually, demand for child care will return. But if state subsidies are slashed, she said, providers like her might not be there to see it.

“The whole child care infrastructure is really at stake,” she said. “We are not all of the sudden going to rebound because it is September.”