KEYSTONE CROSSROADS — When Bria Davis takes her 2 ½-year-old daughter Peyton to the grocery store or other public places, she often wears a little cloth mask adorned with two cats and the word “cute.” Davis tries to keep those outings to a minimum though, because keeping the mask on Peyton can be a challenge.

When Davis returned to work at Valley Forge Casino last week, she put Peyton’s favorite mask away. Peyton’s child care program did not require the kids to wear masks.

But by midweek, the mask was back. On July 8, the Pennsylvania Office of Childhood Development and Early Learning released guidance requiring children 2 and over to wear face masks most of the time. The change is billed as a safety measure, coming as coronavirus cases trend up across the state, driven by infections among young people. Kids in schools will also be required to wear masks throughout the state.

“We find that the data is suggesting that children should be wearing masks any time they are outside of their family’s home and can’t maintain a distance of 6 or more feet,” said Tracey Campanini, deputy secretary of the Office of Child Development and Early Learning.

For Davis, the change at child care is concerning, and not just because her daughter will find the mask annoying. Peyton is very quiet, she said, and often communicates through facial expressions. She’s worried her daughter will struggle to learn with her face covered.

“Don’t get me wrong, I understand the reasoning for it,” said Davis, who is also studying nursing. “It’s just hard.” Signage on the daycare lists the FCCH requirements for childcare centers. (Kimberly Paynter/WHYY)

Potentially dangerous or ‘the coolest thing’?

Reaction to the mask requirement from parents and child care providers has been mixed, with some vowing to disregard the directive and others supporting it as a necessary safety measure.

Christine Dragan, executive director of Warwick Child Care in Chester County, said parents were threatening to disenroll their children within a day of the announcement.

“There are so many things we can’t do with young kids that are wearing masks,” Dragan said. “Language alone … you have a little kid learning language and they have a mask in the way [as they’re] trying to speak the words.”

Dragan said two 1 ½-year-old siblings in her child care program tested positive for COVID-19 a few weeks ago, after their parent came down with the virus. The children were not wearing masks. Dragan claims the virus did not spread to any other kids or staff.

To Melody Connell, an early childhood director with CORA Services in Philadelphia, the mask requirement is potentially dangerous. 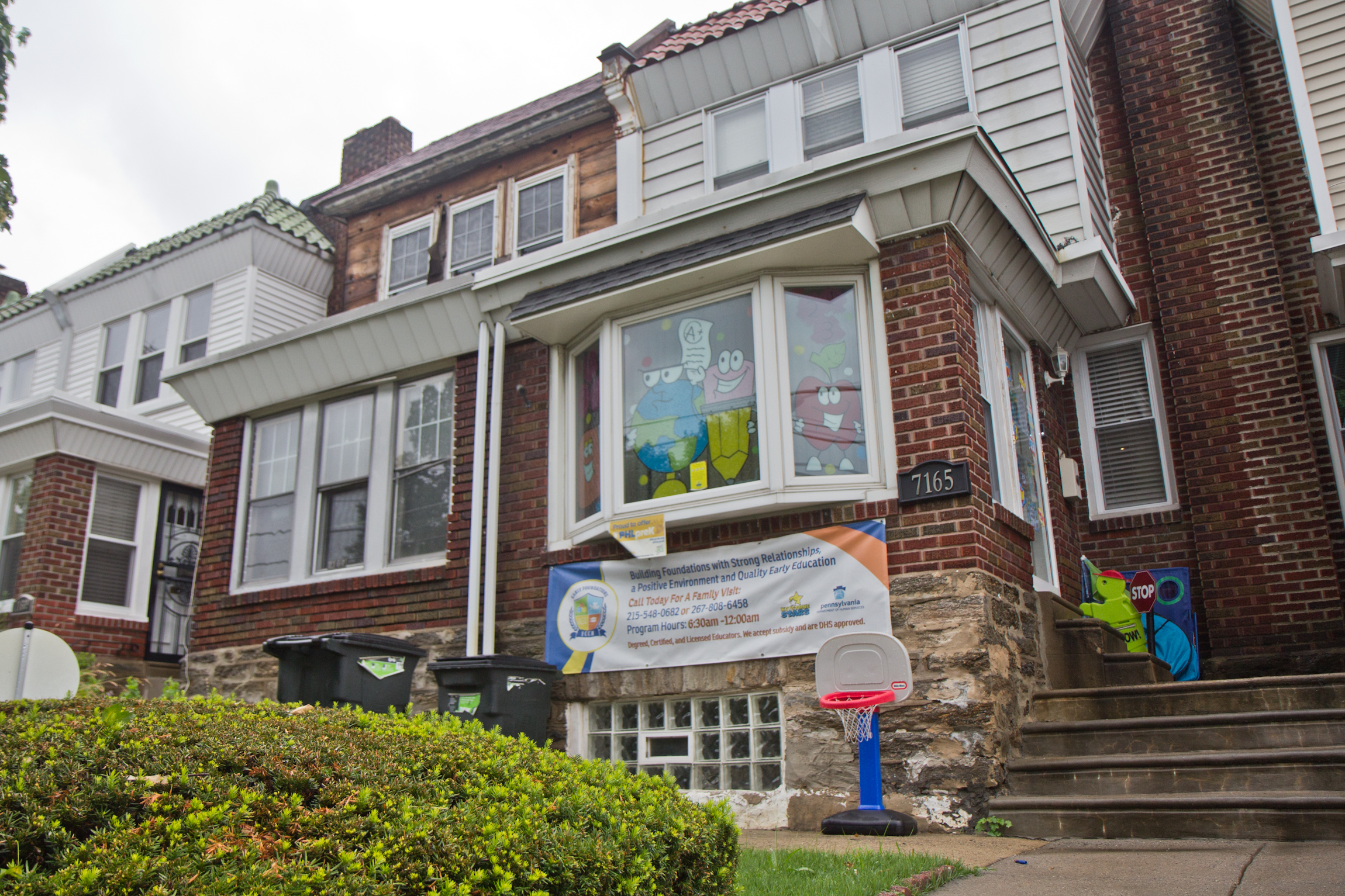 Last week, Connell published on a private Facebook page for child care providers a form letter that requests from state regulators an exemption to the mask order for children under 6. Dozens of providers requested copies.

State officials said in an email that, while they plan to begin issuing citations to child care providers whose staff members are not masked, they will not cite providers who have unmasked children in their care.

Other child care providers said the guidance wouldn’t change much for them. Jolie Clover, executive director of Begin With Us Child Care in Blair County, said she had been requiring masks for staff and children older than 2 since reopening in June.

“We haven’t had any real issues,” Clover said. “The older children actually like having something to be responsible for.”

Rachael Bonsell has three children — ages 8, 6 and 4 — enrolled at Begin With Us.

“My 4-year-old, she just thinks it’s the coolest thing ever,” Bonsell said. “If we are going somewhere, she will bring her mask on in the car just in case. She’ll have it with her all the time.” 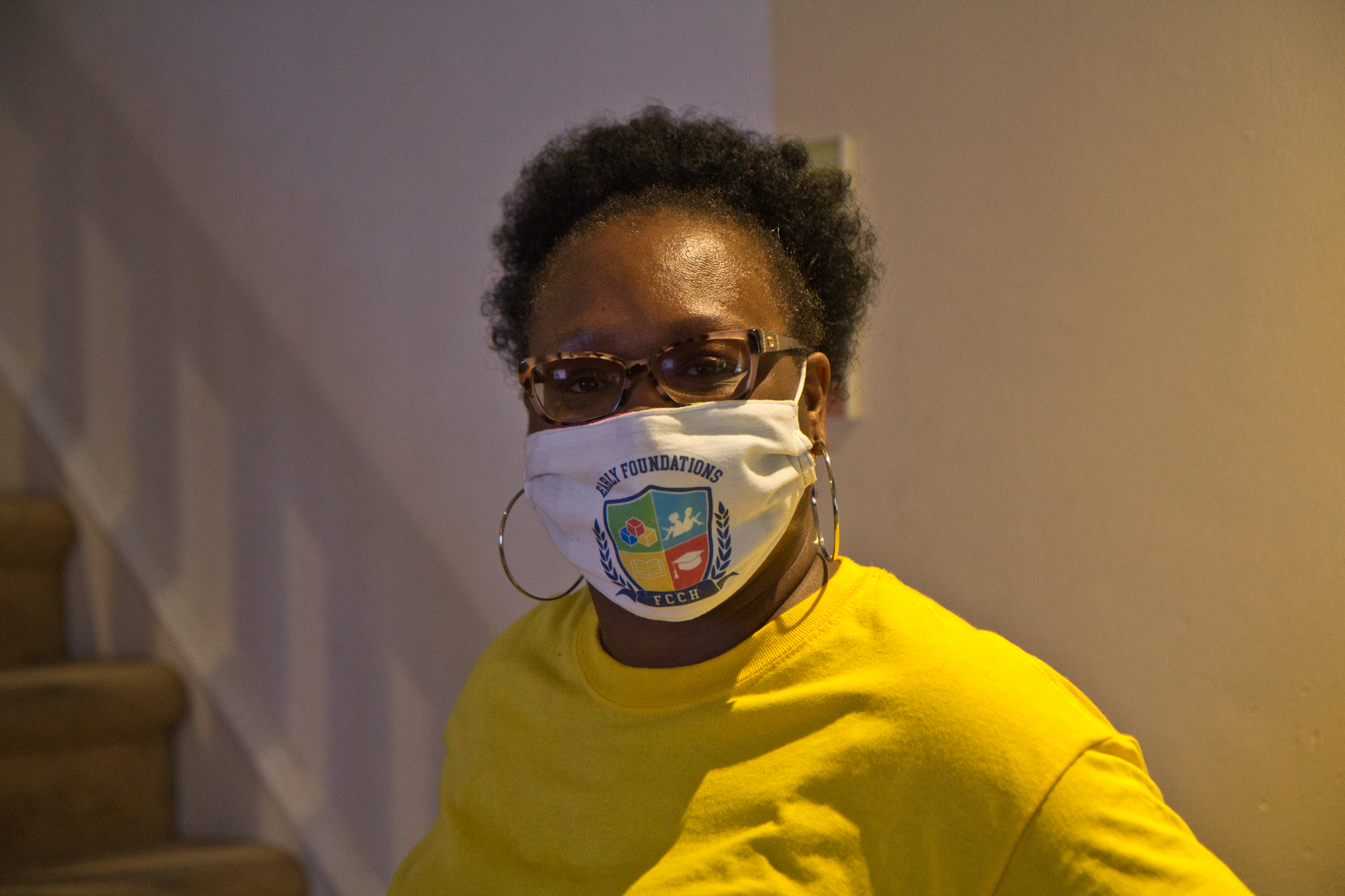 Kimrenee Patterson at her daycare in Philadelphia. (Kimberly Paynter/WHYY)

So far, novel coronavirus cases have been extremely rare at Pennsylvania child care centers. As of Friday afternoon, there have been just 22 positive cases among parents and children, and 54 cases among staff, according to state data.

A survey of close to 1,000 child care centers across the country found the coronavirus case rate  to be 0.15% for students and 1.10% for staff. The survey did not ask whether children or staff were wearing masks.

But outbreaks can happen, and when they do, they can move with surprising speed, as the case of one Northeastern Pennsylvania provider, Michele, illustrates. WHYY is withholding Michele’s last name, and the name of her child care center, to allow her to speak freely without fear of losing business.

Two weeks ago, the mother of an 11-year-old boy at Michele’s child care center told a staff member that her son had been feeling dizzy the previous weekend. The boy had his temperature checked that morning as part of the intake process; he did not have a fever and had passed the daily screening process meant to check for COVID-19 symptoms. But by the middle of the day, his temperature was slightly elevated. The boy’s mother picked him up and took him to the pediatrician, and then to get a COVID-19 test. Two days later, his results came back — he had tested positive. 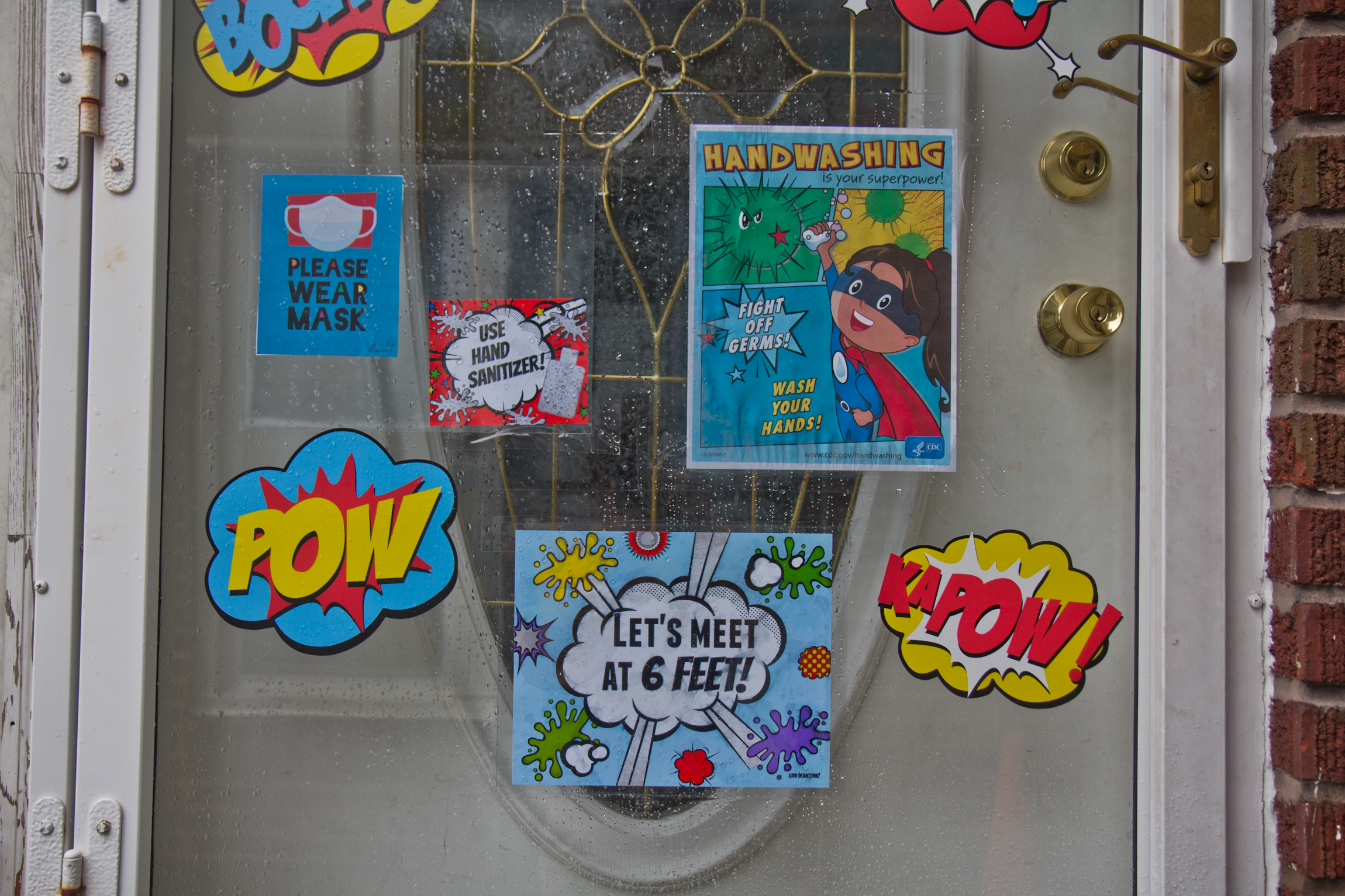 Kid-friendly picture guides tell kids about how to prevent the spread of COVID-19. (Kimberly Paynter/WHYY)

Within a few days, 11 staff members at the center had also tested positive for the virus, though none had a fever or a cough.

Staff members were supposed to be wearing masks in common spaces, but teachers occasionally took their masks off, Michele said. Children’s mask-wearing was left up to their parents — the 11-year-old boy had not been wearing one.

Elizabeth McGraw, director for the Center for Infectious Disease Dynamics at Penn State University, said children infected with the coronavirus are more likely than adults to be asymptomatic or to display only mild symptoms — making it easy for them to unknowingly spread the disease. 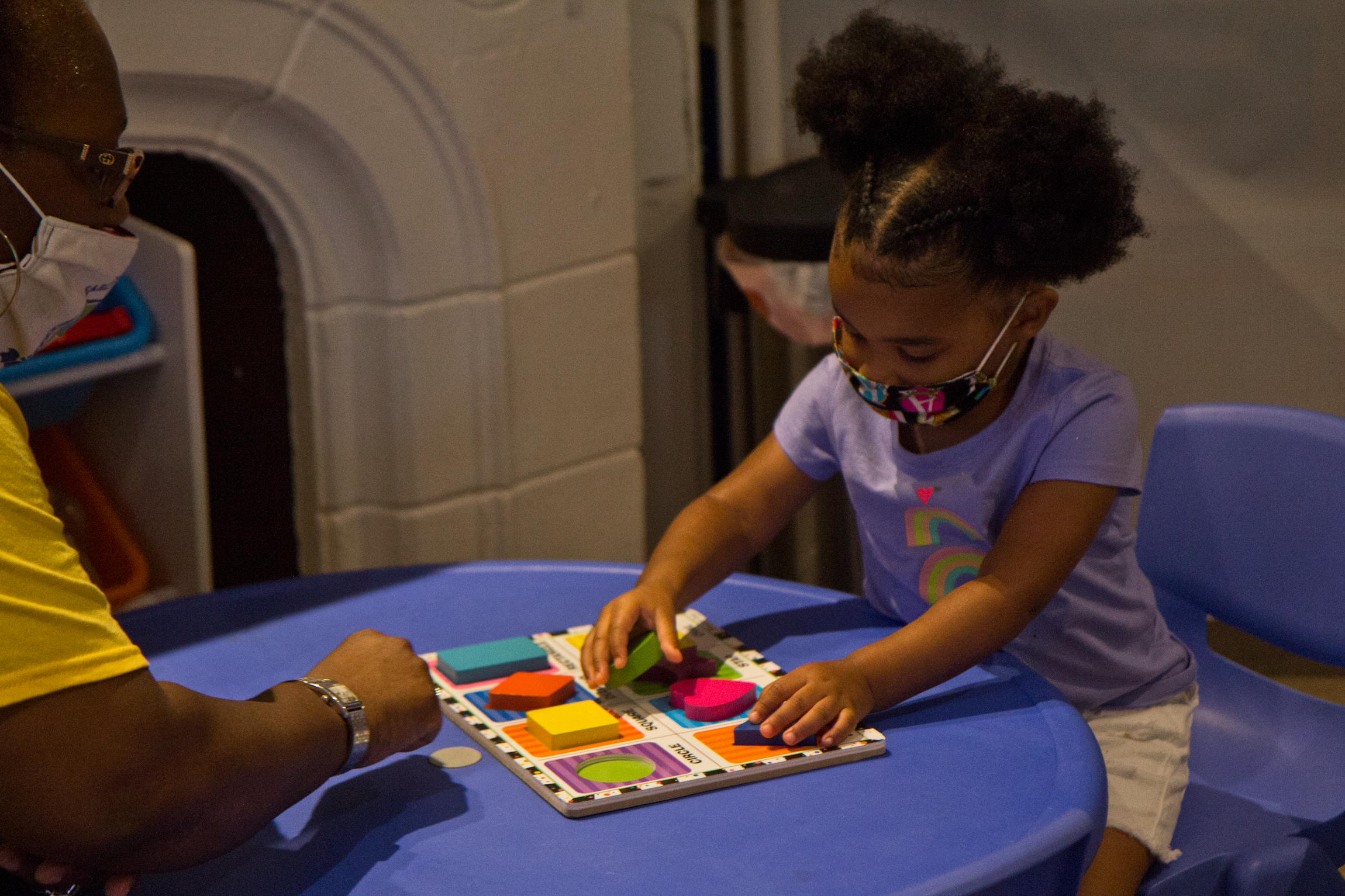 Kimrenee Patterson works on a puzzle, with Peyton, 2, at Patterson’s daycare in Philadelphia. (Kimberly Paynter/WHYY)

‘They seem to know it’s important’

Jill Luedke hasn’t had any problems preparing her twin 5-year-olds for the mask requirement.

The Friday before, Luedke said, “my son, instead of waiting until Monday, decided he wanted to wear his mask, because it has the Incredible Hulk on it, and the Hulk is cool.”

“They seem to know it’s important to do right now.”