But what happens when all that’s normal has gone out the window?

Parents across America have been learning the hard way, as the coronavirus shutdown has forced most everyone to adapt. Joys, yes, they are there too. But the headaches are real — especially when it comes to school.

With kids’ classrooms replaced by the kitchen table or living room couch, many parents have been reluctantly drafted into a new role: teacher’s assistant.

For two months now, Pennsylvania parents able to work from home have juggled jobs and domestic duties with overseeing their kids’ attempts at remote learning.

‘Essential’ workers unable to stay home have faced different challenges: trying to keep tabs on their children through text messages and calls at break-time.

In both cases, the added burdens can often make parents feel stressed, overwhelmed and inadequate.

Keystone Crossroads checked in with mothers — who continue to do the majority of domestic work — from across the Philadelphia region on how they’re handling distance learning.

‘I just don’t have the bandwidth’

Jennifer Byiers knows she is one of the lucky ones.

Although her husband has been furloughed from his job as a personal trainer, the 50-year-old Northwest Philadelphia resident is able to do her job as a financial consultant from home, providing enough income to support the couple and their son Jamie, a 4th grade student at Charles W. Henry School in Mt. Airy.

With two parents, no major money stress, and just one kid, they should be able to give him everything he needs to succeed, Byiers said. So why does it feel like they aren’t?

“I feel like we should be doing more. [But] I just don’t have the bandwidth,” Byiers said. “The fact that I am having difficulties managing this is pretty pitiful.” 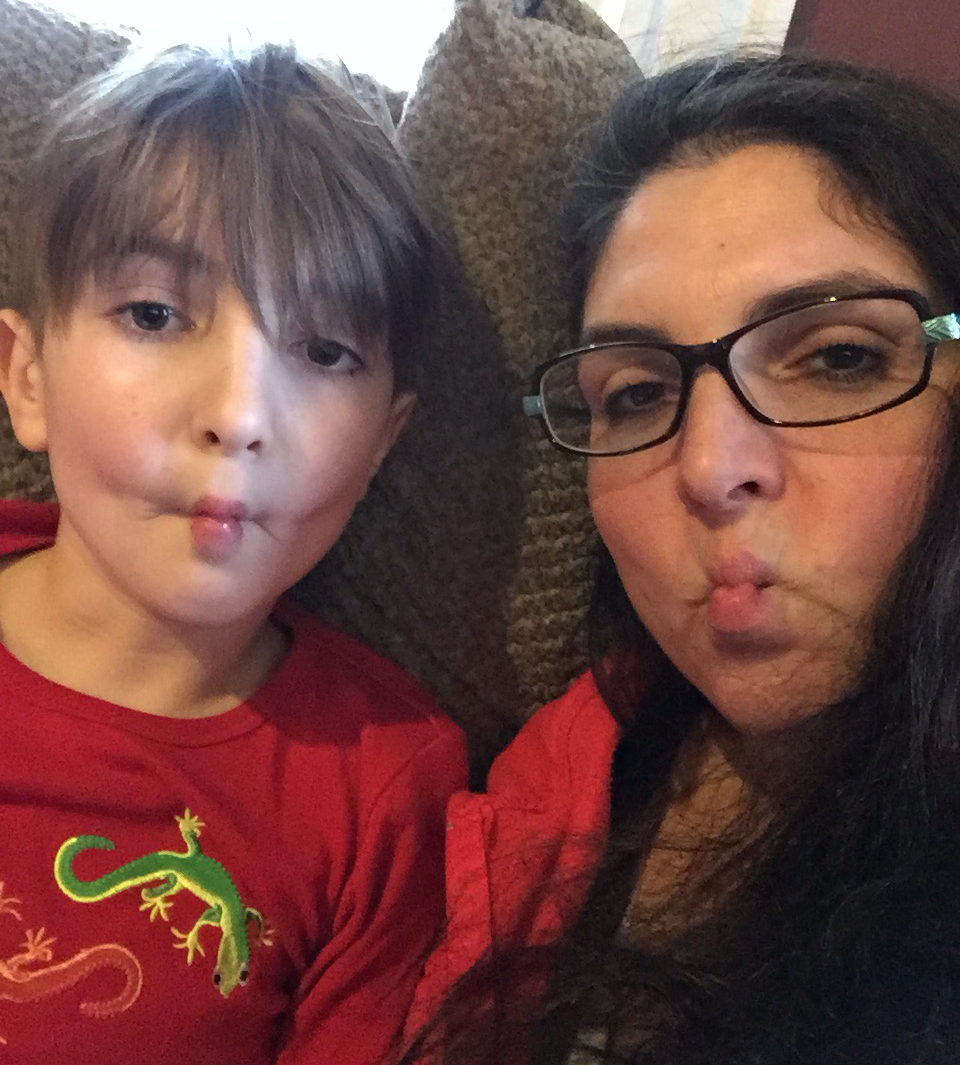 The biggest challenge? Going from managing the vendors of a global firm to helping with math homework and then back again, every couple of minutes, all day.

“My ‘work demeanor’ is very different than my ‘kid demeanor,’” Byiers said. “I used to have that 20-minute commute to switch or decompress, and now it’s a flight of stairs, and I need to be on. That’s really hard.”

Byiers splits the homework help with her husband, and she said her son is handling the change fairly well, all things considered: He’s keeping up with his schoolwork and chatting with his classmates all day online.

Still, Byiers said, she’s looking forward to normal school resuming. She loves being a mom, but highly values her own space — her friends were shocked when she told me she was pregnant.

“I am hoping they come up with a vaccine, she said. “I will be first in line, because I want to get everybody out of the house.”

School days during the pandemic haven’t changed much for Evony Wilcox, a single mother in Chester.

“It’s just like any other day,” she said. “I am at work when they are in school.”

Wilcox, 41, works at a home for adults with intellectual disabilities in Delaware County. Lately she’s been picking up extra shifts, sometimes working seven days a week to save money. That’s made it difficult for her to field the steady stream of text updates coming in from the teachers of her 17-year-old daughter and 14-year-old son.

“I wish I could be home because I feel like the rest of the world is spending time with their kids and I am not,” she said. “I feel like my kids are missing out because I have to go to work.” 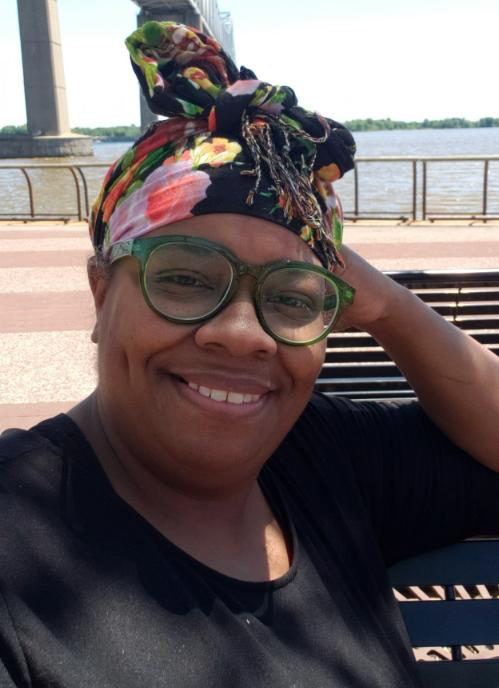 Considered an “essential worker,” Evony Wilcox, 41, does not get to stay home with her teenage children during the shutdown. (Courtesy of Evony Wilcox)

Wilcox said her daughter calls throughout the day for help with schoolwork. With her son, “you gotta pull teeth,” she said — something that’s doubly hard after a long shift.

Wilcox is skeptical her children are getting much out of remote learning. Their schools — STEM at Showalter and Widener Partnership Charter — were hard up for resources like textbooks and computers before the pandemic, she said. Both schools have low scores on state tests. Now, Wilcox worries that the shift to online learning is leading her kids to fall even further behind students in wealthier districts with better access to supports.

“It’s frustrating because they’re already behind,” she said. “And they are going to be behind two, three times as bad when they go back to school.”

If there isn’t a vaccine for the virus by the start of the next school year, Wilcox said she will look into transferring her kids into cyber schools.

‘I will trust you until you prove otherwise’

Nereida Babilonia has been through this routine before.

Her 17-year-old son Jacob’s high school, Science Leadership Academy, closed for a month due to asbestos in the fall.

That virtual learning experience was never one she expected to feel any gratitude for, but when the pandemic hit, it came in handy.

“We got into a nice rhythm of online learning back in October and November,” said the 44-year-old Northeast Philadelphia resident. “And so when this came back again, it was like ‘Oh, let’s just do the online learning.’”

Babilonia’s husband, a machinist, is still going to work, but she’s able to do her job at a religious nonprofit from home. With one older daughter home from college and another back from a gap year in New Mexico, space in their twin-house is at a premium: Babilonia and Jacob spend each day sitting across from each other at the dining room table.

Babilonia monitors her son’s assignment schedule, but that’s about it. He’s more like a deskmate, she said, than a pupil.

Babilonia said she’s glad they’re having such a relatively easy time with remote learning, but she is looking forward to sending Jacob back to SLA’s newly renovated building next year.

Her son is looking forward to returning, too: “[Working with my mom] can be fun,” Jacob said. “But yeah, it is nice to be by yourself sometimes.”

‘Holding their hands to the keyboard’

The coronavirus shutdown has led Abby Schrader to take on a few new roles: schoolteacher, IT worker and short-order cook.

“I’m making sure they’ve got everything they need to be online,” said the 54-year-old Fairmount resident. “Then lunchtime comes. I just took orders…one kid wants dumplings with corn, the other kid wants pasta. So I am now cooking meals for lunch. And delivering.”

Schrader, who teaches history at Franklin & Marshall college in Lancaster, splits custody of her 11-year old and 13-year old children with her ex-wife, who lives in the Philadelphia suburbs. During her weeks with the kids, Schrader said, her life revolves around them: waking early to make their breakfast, checking in on their schoolwork throughout the day, cooking their meals, and then prepping to teach her college classes after they fall asleep, often late in the night.

Schrader said she doesn’t mind the label one of her kids gave her: ‘helicopter mom.’

“Holding their hands to the keyboard is something that it becomes the parent’s job to do,” Schrader said.

The first few weeks of online instruction were rocky, Schrader said, but she’s happy with the quality of Friends Select’s online schooling now. Still, her children are struggling with the pandemic induced-anxiety: her 11-year-old won’t even go into the backyard, Schrader said, because she’s afraid she will get sick.

It’s something that even the most supportive ‘helicopter mom’ struggles to tackle alone.

“That’s the sort of thing that I think, as a group in school, they might be able to talk about,” Shrader said. “There might be programs for them.”

For Angela Kearney, distance learning has been a humbling experience.

The 50-year-old Pottstown resident has spent the last few years earning an associate’s degree in paralegal science and a bachelor’s in legal studies. She finally landed her dream job as a paralegal in January – only to be furloughed in March. Since then she’s been at home, focused on supervising the education of her four children and grandchildren ages 8 to 13.

“It doesn’t matter how many degrees you have, your third grader may be right,” Kearney said “It’s a struggle.”

Kearney’s house is jam-packed: in addition to her school-age kids, she shares it with her husband, who’s fighting kidney cancer, and her 20-year-old daughter Catheryn, who is hoping to attend Montgomery County Community College when it reopens. Kearney’s grandkids are dropped off every day by another adult daughter, Hope, who is working as the front desk manager of a nearby Holiday Inn. 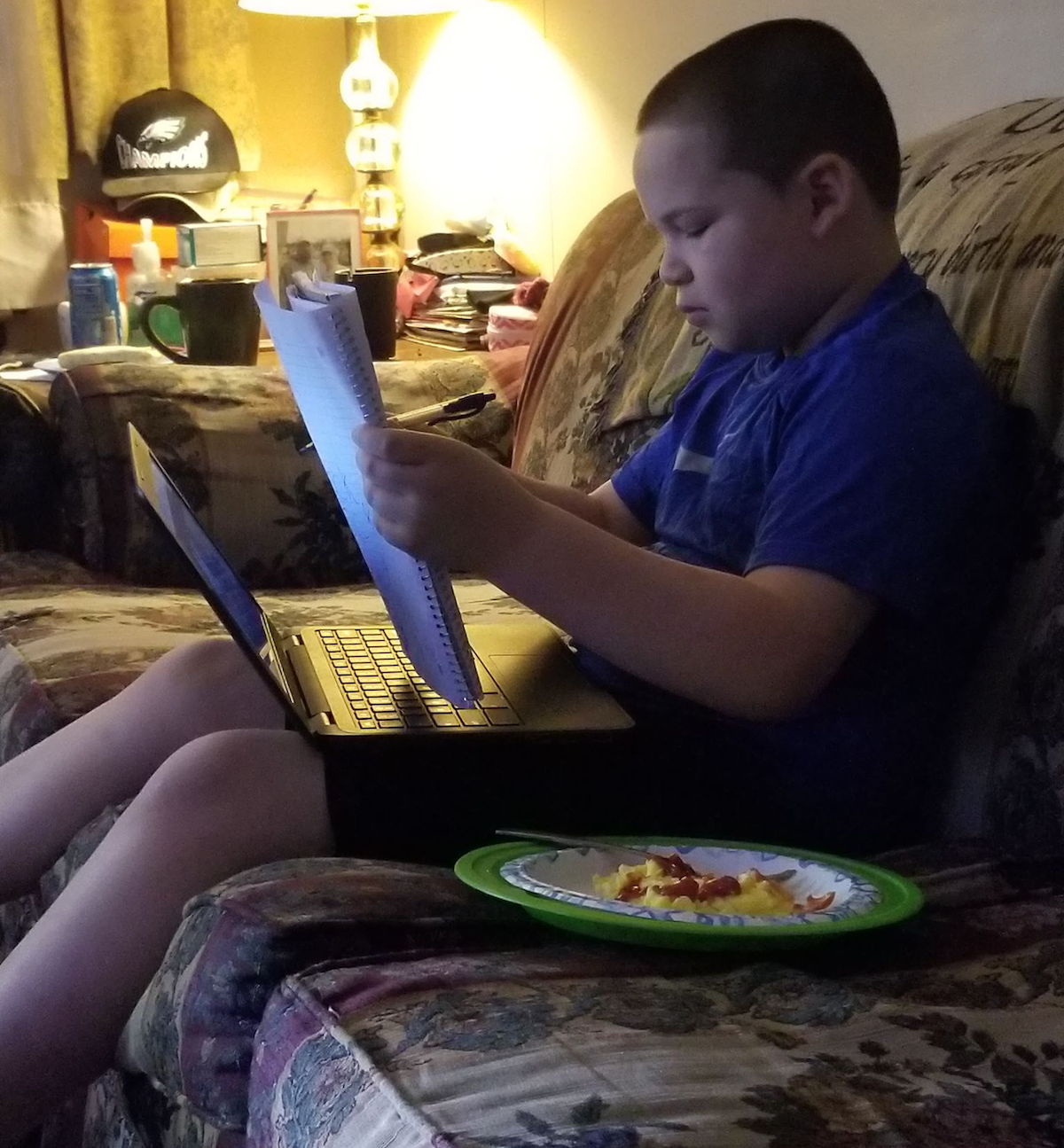 Angela Kearney’s grandson David, 8, writes a letter to another student in his class. (Courtesy of Angela Kearney)

Each weekday, Kearney tries to recreate a typical day at Pottstown Middle School or Lincoln Elementary as best she can. The morning starts with a reading lesson. Then, a ‘brain break’ for kids to move around. After that comes math, followed by ‘recess’ in the backyard.

“I’m trying to help our teachers by educating them the same way at home,” she said. “So when they go back…normalcy will occur.”

Scheduling lessons can be a challenge: the four kids have just two laptops to share. Still, Kearney said, the students have been able to keep up. What she worries about is getting the call that it is time for her return to work.

“I’m the breadwinner of the household,” Kearney said. “If my job calls me to come back, who is going to school the children?”

Christian Toland, Kearney’s 13-year-old son, said he has struggled in school before, but this year he felt he had finally come into his own.

“Everything was going so smoothly, and then it got ruined,” Toland said.

Toland is not a fan of remote learning. He had some stern advice to offer to the adults not heeding social distancing guidelines.

“Us kids…we are really trying to have a summer,” Toland said, hoping restrictions will lift as the curve flattens. “And I am pretty sure [adults] are too. So I would suggest you stay home.”