HARRISBURG, PA (WSKG) – At least four Pennsylvania agencies have told state lawmakers they need more funding to address one of the biggest woes each of them has faced during the pandemic: not being able to hire or keep enough staff.

Each is arguing that funneling more money to support staff positions is one of the best ways to solve the problem.

The Education Department points to its need to reverse the ongoing exodus of teachers and other professionals, while the Department of Human Services agreed with findings that show disability services providers are cutting back services because none of them can hire enough staff.

“We’re recognizing the stress and the retention issues and the vacancies,” Rep. Joe Webster (D-Montgomery) said during a Wednesday budget hearing. “It hits [so many] agencies.”

On Thursday, as the final budget hearings in the House were wrapping up, the chamber’s Republican majority leader signaled his caucus is still not on board with much of Gov. Tom Wolf’s $43.7 billion General Fund spending proposal.

That fund is the largest pot of money state lawmakers directly control. Pennsylvania receives tens of billions more from the federal government and from other sources, like lottery and motor fuel taxes.

“We’ve learned a lot and confirmed much of what we already knew,” House Majority Leader Kerry Benninghoff (R-Mifflin) said in a statement. “As we have grown to expect, his [Wolf’s] budget proposal is heavy on spending and light on fiscal responsibility.”

Last month, Wolf proposed spending around $4 billion over what lawmakers green-lit last summer, not including the more than $1 billion in emergency pandemic relief money.

Much of that would pay for new staff positions and to help graduate 300 trooper cadets from the State Police academy.

PSP said that extra money would also help it hire more investigators who could crack down on things like convenience stores that sell alcohol. Philadelphia residents are among those who have long complained some of those shops, known as stop-and-gos, don’t follow state liquor laws and are not held accountable as often as they should be.

“We’ve seen throughout the years: most of the time they don’t have proper seating, they don’t have the proper space and those types of things, and there are violations there,” he said during a March 1st hearing. 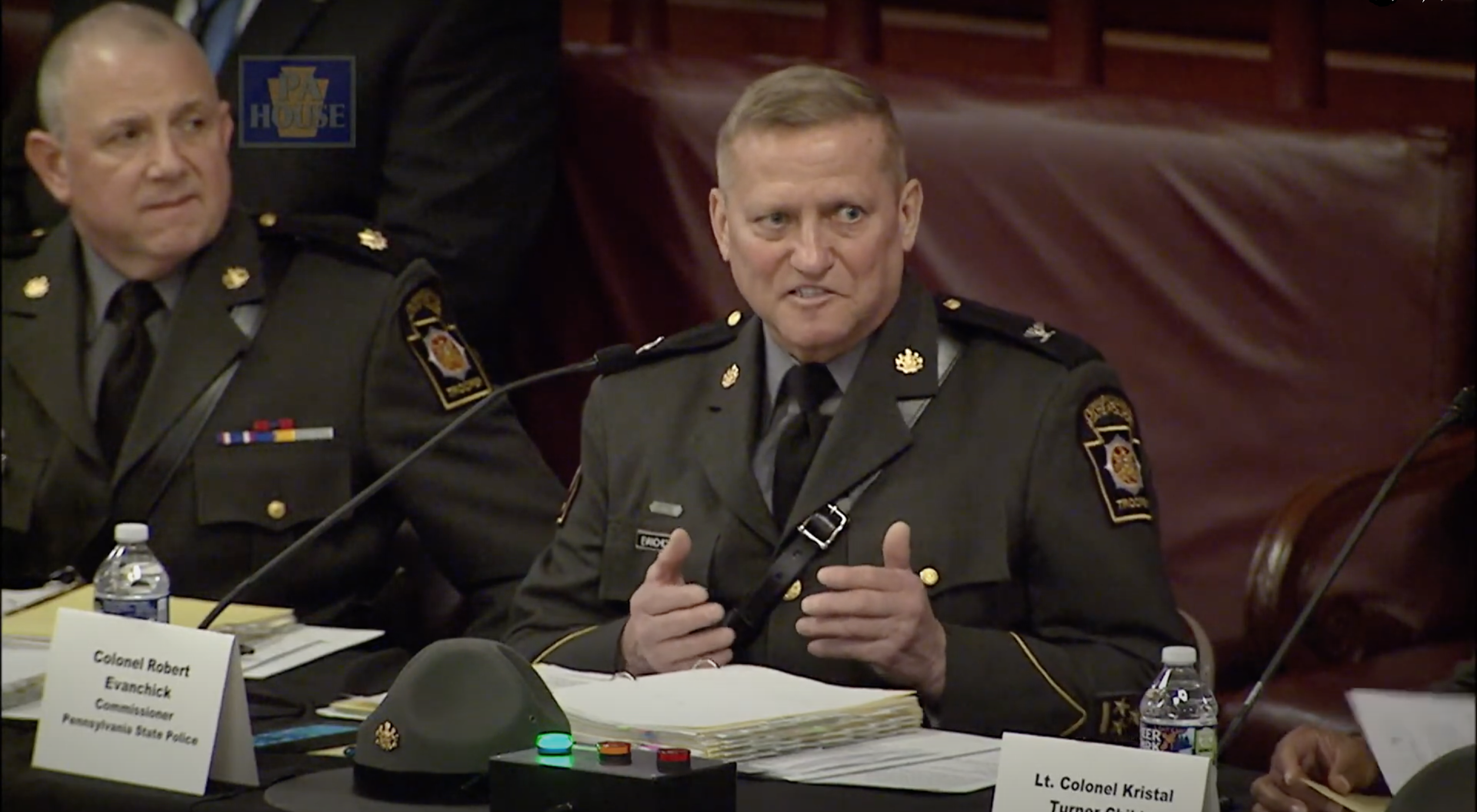 House Appropriations Committee / via Youtube. In this screenshot, State Police Commissioner Robert Evanchick testifies at an annual state budget hearing in the Pennsylvania House on March 1, 2022.

The State Police also want to hire 32 more people to help process background checks when someone wants to buy a gun.

Those usually take five minutes, but a few House lawmakers said some constituents have recently had to wait for more than an hour. State law allows PSP to take up to 10 days to process a background check, since it may need to investigate whether someone was convicted for a crime that would prevent gun ownership.

Deputy Commissioner for Staff Kristal Turner-Childs said the State Police is aware of the problem, though she added the computer network that hosts the Instant Check background system was able to process online requests mostly without issue last year.

“But if you’re standing in a dealership and you’re there for an hour, that’s your time. So we certainly understand that and it doesn’t go unnoticed by us,” Childs said.

The extra background check staff would give a needed boost to a system PSPS says is vital in stopping potential gun crime. Nearly five hundred people were arrested on gun charges last year thanks to the Instant Check System.

During its annual state budget hearing, Department of Labor and Industry Secretary Jennifer Berrier told state lawmakers as many as 47,000 unemployment compensation fraud claims still need to be investigated.

The agency head said during the pandemic, a lot of people have tried to apply for benefits using someone else’s personal information.

When the pandemic began two years ago, hundreds of thousands of people were filing new claims for state unemployment help each week. The number reached nearly 400,000 people in early April 2020. That overwhelmed Labor and Industry workers – and left some people who applied frustrated about how long it took to process their claim.

As of March 3, the number of new applicants was down to around 10,000. But Rep. Jim Struzzi (R-Indiana) said he’s still helping constituents who are having trouble getting paid.

“We try to escalate this stuff through our staff, [who] reach out to your staff. Guess what kind of responses we get? ‘Tough luck.’ ‘Wait in line like everyone else,’” Struzzi told Berrier during last week’s hearing.

Even with fewer claims, the Labor & Industry department has had a tough time hiring enough people to process them. It had planned to hire 100 workers for the job earlier this month, but only brought on 30. Some of the 1,300 temporary workers the agency brought on to process the claim backlog were let go when the contract that kept them paid expired last fall. Just 200 of those workers remain, Berrier said.

The agency said at least $4 million more in state funding would help its recruitment efforts and keep a new online benefits system working. As for combating unemployment fraud, Berrier said L&I has 21 fraud investigators and plans to hire 60 more people to help solve those cases.

Labor and Industry is asking for around $83 million in all from the General Fund.

Pennsylvania’s Department of Education wants around $2 billion more in funding from the state’s largest account this year.

Around three quarters of that increase would go directly to K-12 school districts. $300 million of that pool would be sent to Pennsylvania’s 100 lowest-funded schools. If approved, the increase would be the one of the biggest in state history.

Some Republicans in the GOP-controlled legislature said they aren’t convinced a big increase would lead to better test scores. They point to a fiscal watchdog report that shows money didn’t affect test scores during the 2018 school year (Pg. 23 of this PDF).

“Make the argument that we should just ignore that statement by the IFO, when you’re asking for $1.5 billion more,” Rep. Torren Ecker (R-Adams).

Education Secretary Noe Ortega said that research didn’t look at things like graduation rates or attendance, which are also used by state assessors to evaluate student performance. In a WITF interview earlier this year, IFO Director Matt Knittel clarified the probe was limited in scope and only explored whether test scores and state funding are correlated.

“Resources and certain factors do play a role in the outcomes of students, especially in students of special populations, and that is something that we all agree on,” Ortega said at a Monday hearing.

State lawmakers agreed to give schools a $300 million increase last year, and the House’s chief Republican budget maker said districts will probably get more money this year too.

More money would mean districts would be able to offer more pay to school transportation drivers, some of which have left the profession over wages. The Education Department had reached out to all commercial driver’s license holders in Pennsylvania during the fall in an effort to make up the shortfall.

An agency head told lawmakers that the department is “willing to have a conversation” on increasing the driver pay rate.

Ortega said agency leaders are also working to coax retired teachers back into the workforce, and are considering creating a student loan forgiveness program for teachers that’s separate from those that certain teachers can already access.

Among other things, the Education Department also wants to set aside an additional $1 million to help subsidize public school libraries and give state-related universities at least five percent more funding than last year.

The Department of Human Services wants Pennsylvania lawmakers to agree to spend at least $3 billion more dollars out of the state’s largest fund to support its several dozen programs.

Like most states, Pennsylvania spends more on its human service efforts each year than anything else. Since last June, the state has shelled out almost $37 billion on everything from state-supported health insurance to grocery assistance.

The agency signaled in budget documents that it needs the extra cash to replace federal money that helped pay for things like healthcare services during the pandemic. Human Services Secretary Meg Snead says on top of that, it needs to help service providers pay their direct support professionals more.

Those workers help Pennsylvanians with intellectual disabilities, among others. When a group of providers who employ those workers were surveyed earlier this year, about 50 percent of them said they had cut back services because they couldn’t find enough workers. A group of 26,000 direct support professionals applied to state-supported jobs around the same time, but just 2,600 agreed to take the job when offered.

“They do really, really difficult work every day, and the least we can do is lift them out of poverty so they can serve more people and be there for us when we need them at the end of the day,” Snead said at a Wednesday hearing.

DHS has said it would use some of its remaining federal pandemic relief money to help providers pay their direct support workers at least $15 per hour. Advocates are asking for at least $18 per hour for those workers. The department signaled to House lawmakers it’s still negotiating the rate with providers.

The state allows families to hire friends or other family members to help with direct support duties and is encouraging more people to do so amid staffing shortages. But Rep. Leanne Krueger (D-Delaware) pushed back on that suggestion.

“At the end of the day, sometimes folks need a break and having a caring, qualified person to come in and support their loved one with special needs is essential,” she said.