People greet each other before the start of the service at World Harvest Outreach church in Chambersburg on Sunday, Aug. 14, 2022. (Jeremy Long/WITF)

(WITF) – Jenny Embry stood amid 75 people in church chairs in a meeting room and wiped away tears.

She was telling her fellow members of World Harvest Outreach in Chambersburg something she’d never talked about in public.

She was sexually abused growing up, she said. Her depression led to drug and alcohol abuse. She got pregnant.

“I fell into hopelessness all over again, drunk with hopelessness. And I made a thoughtless decision to have sex with a guy because I was depressed out of my mind,” she told the congregation. “And unfortunately, and wonderfully, we had a baby and we’re not together.”

At the time, a friend suggested that Embry, who was raised Christian, reconnect with her faith at World Harvest Outreach, a non-denominational church in Chambersburg.

She would discover that the church prides itself on holding open dialogues with its members, in a time when friends and families can have a hard time talking about political issues. 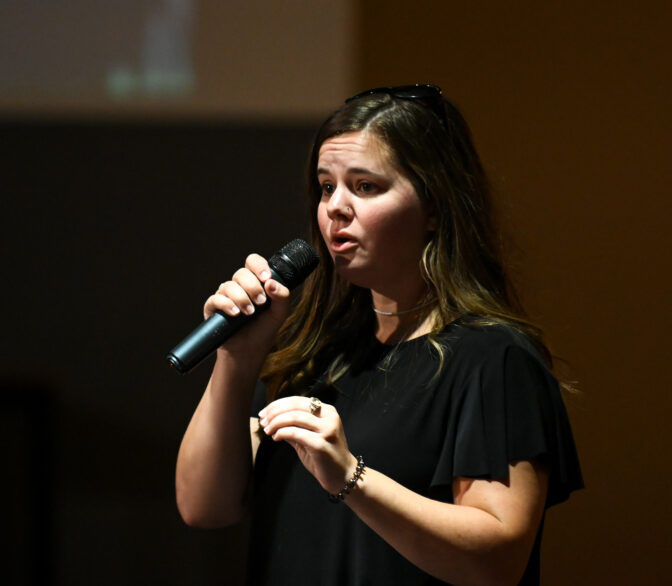 Jenny Embry speaks about her thoughts on abortion during the service at World Harvest Outreach church in Chambersburg on Sunday, Aug. 14, 2022. (Jeremy Long/WITF)

In the past, members have talked about gender identity, the end of days, and politics in general.

At the service during which Embry spoke, the discussion is focused on abortion, in the wake of the Supreme Court’s decision overturning Roe v. Wade.

Embry wept as she recalled the church’s support in her time of dire need.

While she spoke, some congregants nodded their heads, and others cried with Embry.

Conversations like these are becoming increasingly rare. According to the Pew Research Center, about half of all Americans avoid having conversations about political issues because they’re too stressful. Many Christian faith leaders avoid having them with their congregations out of fear of alienating their members, or possibly losing their job.

Over the past few years, some churches in Pennsylvania have experienced rifts within their congregations over politics.

But here, the weekly sermon is occasionally replaced with an open forum for members to speak about anything they want.

On a picturesque Sunday morning in mid-August, people greeted each other with hugs and filed into the service.

A handful of quotes are written in capital letters across the tall white walls to encourage members to share their thoughts — and to listen — without judgment.

One says: “True honor sees who someone really is and then agrees with the value discovered in them.”

They filed into their chairs to the backdrop of the church’s praise band.

Before Embry spoke, Jill Starliper talked about how she was thinking about the Supreme Court’s decision in the Dobbs case.

“God created us. He also gave us the ability to create. And that’s an amazing thing that we better pay close attention to what we are doing,” she said. “So yes, let’s not use it casually. Let’s not take it lightly.” 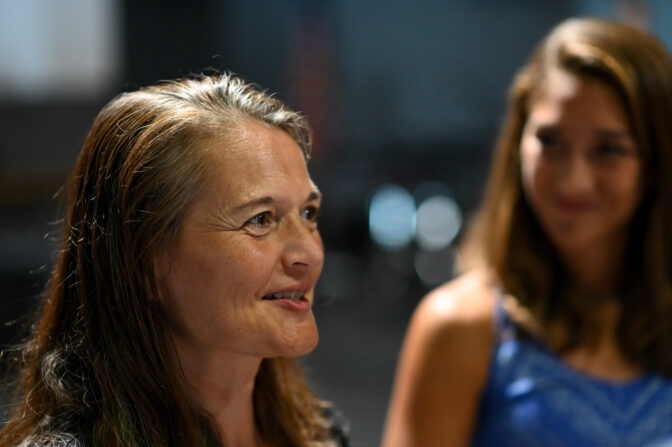 Jill Starliper talks about her thoughts on abortion and what it means to be a member of the World Harvest Outreach church in Chambersburg on Aug. 14, 2022. (Jeremy Long / WITF)

Starliper joined the congregation with her husband and daughter six years ago. They drive an hour from Mechanicsburg to attend the church situated between a Cracker Barrel and an Arby’s right off I-81 in Chambersburg.

The area is a GOP stronghold. In both this year’s primaries and the 2020 election, there were five times more Republican voters than Democrats.

Most congregation members who spoke opposed abortion on a personal level, but agreed any outright bans fail to address the underlying issues that would cause a woman to seek an abortion in the first place.

Some talked about how they can be a more supportive community for women struggling with a life-altering choice.

In an interview afterward, Embry said she was impressed that the group embraced such a nuanced topic.

“Mothers who have had abortions are still mothers, regardless of what choice they’ve had, even miscarriages, they’re still mothers,” she said. “They just had a different birth experience than a live birth.”

She says conversations like this are the best way to help each other fully understand the experience of a pregnant mother lacking the resources or the support system to make the best decision for herself.

“Let’s rally around these people who really need help. Let’s find ways where we can get more mental health counseling, therapy and stuff like that to help people who are struggling emotionally and even spiritually, whatever. And I think that if we can heal some of that stuff,” she said, “I think it would open up the conversation for, ‘How do we resolve this?’”

Ned Kelso converted to Christianity after years of admittedly chasing promotions as an insurance salesman while neglecting his family at home.

“My favorite slogan was, if it’s meant to be, it’s up to me,” he said in an interview after listening to Embry’s story. “Everything was about me and what I did. And I basically lost everything… And I wondered why.” 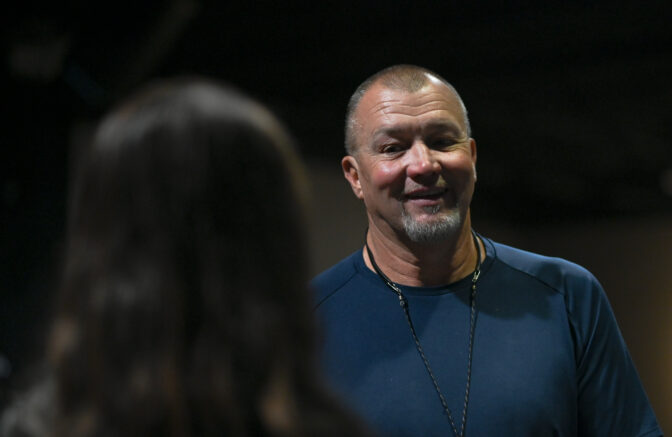 He says his wife guided him, teaching him more about the Bible, so he started joining her at World Harvest services.

In a time of deep partisan divides, Kelso says many Christians need to be reminded of what the Scripture says.

“We’re forgetting the number one commandment to love one another. And if you disagree with me, then all of a sudden I can’t be in the same room? If we love someone–I’ll start crying just thinking about it,” he said, holding back tears. “If God can love me as horrible of a person as I am and the horrible things that I’ve done in my life, then how can I turn around and say, ‘Well, if you’re not going to agree with me about this or this, then I hate you and you’re a bad (person)’–-that’s so hypocritical.”

Pastor Mark Durniak says he’s encouraged members to lean into uncomfortable conversations for the last decade, but the openness he welcomes didn’t sit well with many congregants.

He’s lost about 30% of his members over the years.

“They wanted me personally as well as the church to be more direct and opinionated and have a very strong Christian party line, so to speak, about, ‘This is what is right, and this is what is wrong,’” he said. “And so, yes, as a result, people who had a different opinion of me made a decision to literally leave fellowship and leave relationships as a result of not experiencing the sameness.”

He said Christians are more divided than ever over how to balance their faith and politics.

“There’s a lot of people that just don’t get it. A lot of people just want to come to church to be talked to – I don’t want to say entertained, but given what they need, and then they leave… But at the same time,” he said, “people are more apt to share their opinions than I have found ten or twelve years ago.”

After the service, Durniak reflected on what his parishioners talked about earlier in the day.

He said the church primarily helps women seeking to carry their pregnancies to term, but “probably would offer assistance” to those seeking abortions due to rape or incest.

If a pregnant woman came to the church seeking help, he said the church would listen.

“…We would sit with them, heart open, postured to understand. Then, after hearing his or her story, we would begin to ask questions,” he said. “The goal… would be to determine if the context – people, resources, home – is healthy for a child to brought into.”

Durniak said the church would also discuss the local organizations available to help. 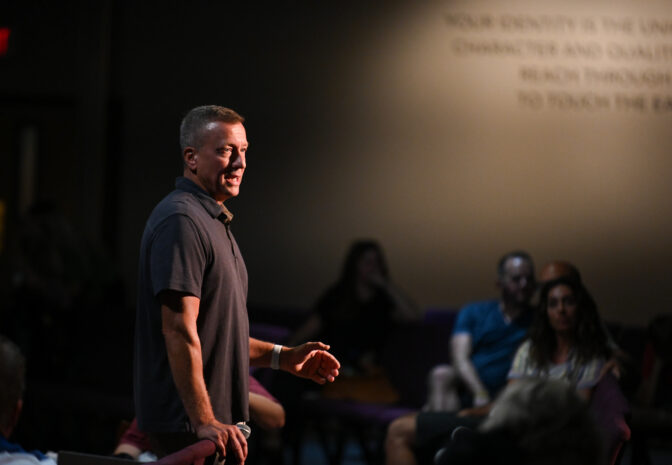 “We would let them know that WHO is a safe place to land and come alongside them in their pregnancy and child-raising journey,” he said. “If funds were needed for medical care, we have a Compassion Fund.

If wisdom is needed, we have strong, experienced folks. If friendship is desired, we have men and women walking similar roads they are on.”

He hopes the church can ultimately be a “spiritual family who would listen, walk with and encourage them.”

Earlier, as the service wound down, members processed the last hour of emotionally-charged testimonies from their fellow parishioners.

Durniak had asked the group one final question.

“In this church, how can we love them now?” he said. “How can we be this heart that we’ve talked about here so that these ones feel like they have community, they have a place that will help them walk that road that they’re going to eventually walk?”

The conversation remained unconventionally civil throughout. Nobody’s life experiences were invalidated. Nobody raised their voice.

Those who hugged each other on the way in did the same on the way out — and went out of their way to include a few who were still crying after sharing their stories.