WSKG – Pennsylvania’s next state budget is due by month’s end, and lawmakers are beginning to hammer out the details of what will surely be a spending plan that is larger than the $39.8 billion plan approved last June.

Rep. Stan Saylor, the outgoing Republican chair of the powerful House State Government committee, addressed a key idea the GOP has for using part of the state’s roughly $5.5 billion in surplus tax revenue: socking some of it away in an emergency spending account known as the Rainy Day fund.

He pointed to data from groups like the Independent Fiscal Office, which is forecasting a more than $5 billion dip in tax collections next year as pandemic relief efforts wind down. Others like the World Bank say signs like inflation and Russia’s invasion of Ukraine suggest an economic downturn is looming.

“We want to be prepared so that we’re not cutting programs in 2008 and 2009 [during the last major recession],” Saylor said. “I think $5 billion in the Rainy Day fund is a good amount to have there moving forward for the next session.”

That fund currently holds $2.8 billion, according to estimates from Gov. Tom Wolf’s office. The Brookings Institute’s Tax Policy Center suggests states should try to put away at least 5 percent of their annual spending. That means Pennsylvania would need to have at least $2 billion put away, since it spent around $40 billion in state money over the last year.

Though that suggests the state could have enough money to plug any future budget holes, House Democrats are not saying no to putting more away.

“We’re not going to foreclose anything. If they bring that to the table, if that’s a priority, we’ll certainly consider it,” Rep. Matt Bradford (D-Montgomery) said. “We would also say, though, it’s a priority to return money to taxpayers.” 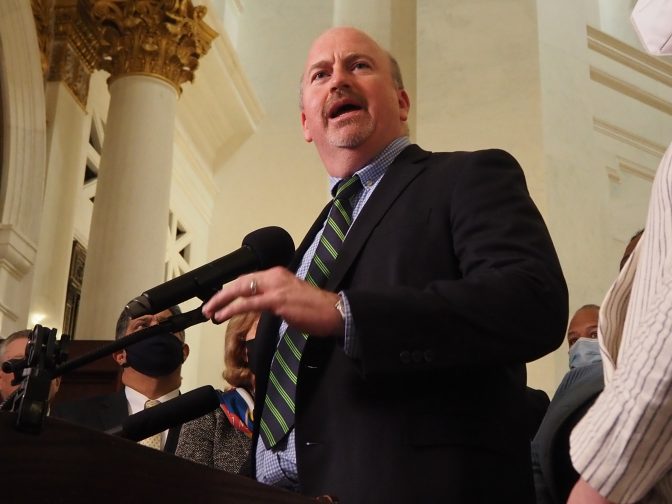 Bradford balked at the $2 billion number Saylor has thrown around, suggesting that amount may be trimmed by the time the new spending deal is inked.

“That’s hoarding a lot of taxpayer’s money. Frankly we need to return some of that money…in terms of lower taxes and support for their schools,” he added.

Sen. Pat Browne’s (R-Lehigh) office said savings increases are part of budget negotiations each year, adding that this year is no different. Browne chairs the Senate Appropriations committee. Republican state Treasurer Stacey Garrity has for months advocated for propping up Pennsylvania’s emergency savings, writing in an op-ed last week that depositing more money in that account this year would be the “right thing to do.”