But such is life for Kitsock, 66, in a land where volunteer ranks have dwindled and old wooden homes can quickly turn to ash.

“We get a daytime call, I’m hoping there’s two or three others who show up with me,” said Kitsock, who still runs with the Seltzer Hose Company in Norwegian Township in Schuylkill County, Pennsylvania. In the early days, he had to jostle with 20 to 30 other volunteers just to get on the engine. Now, comparatively, it’s a ghost town. 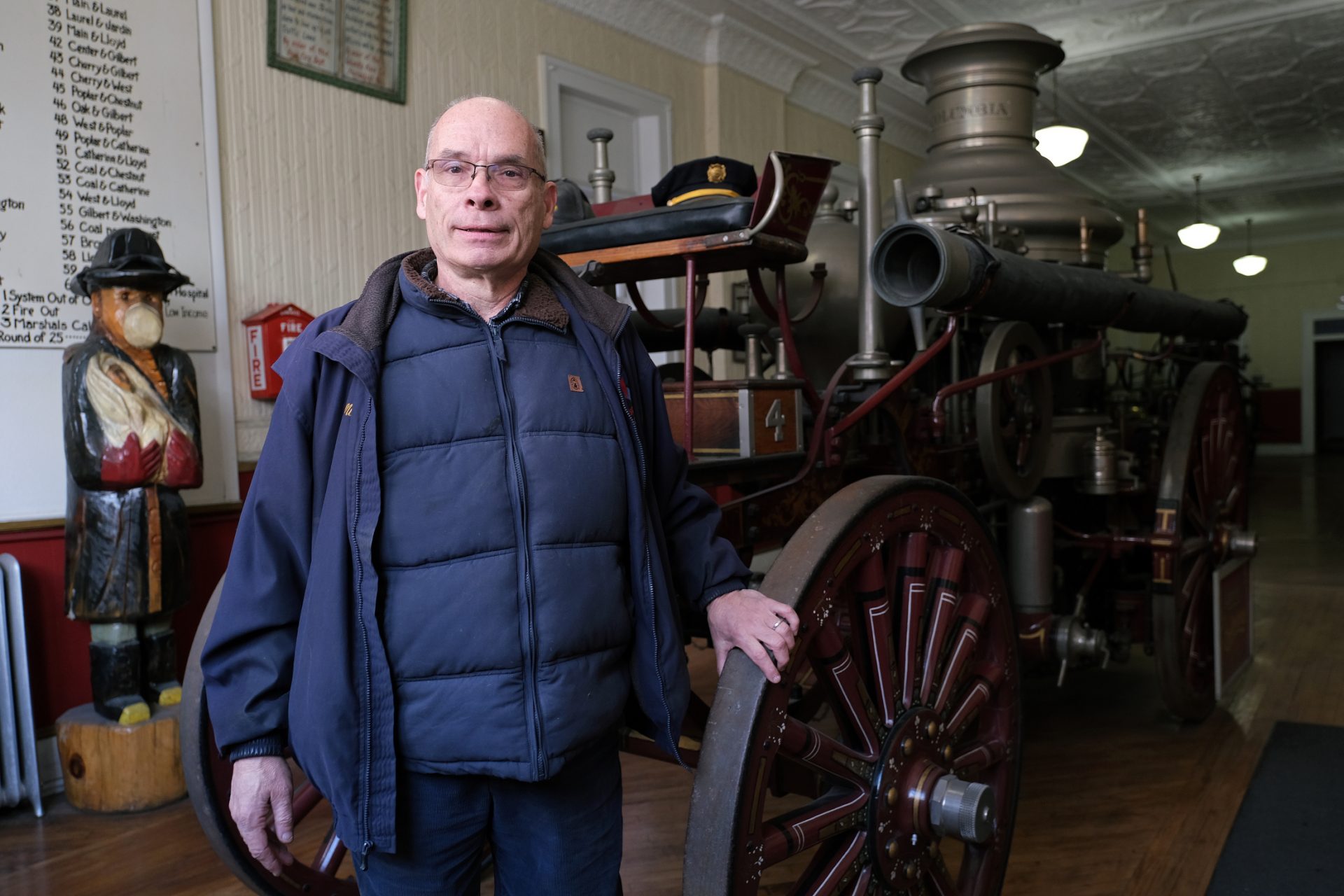 Longer working hours, longer commutes and the rise of dual-income households have left less time for volunteering. Firefighters are aging and not being replaced. Pennsylvania is the birthplace of the volunteer fire company and to this day most firefighting in the state — and in the country — is done by volunteers. In the 1970s, Pennsylvania had 300,000 volunteer firefighters. Today, it has around 38,000. 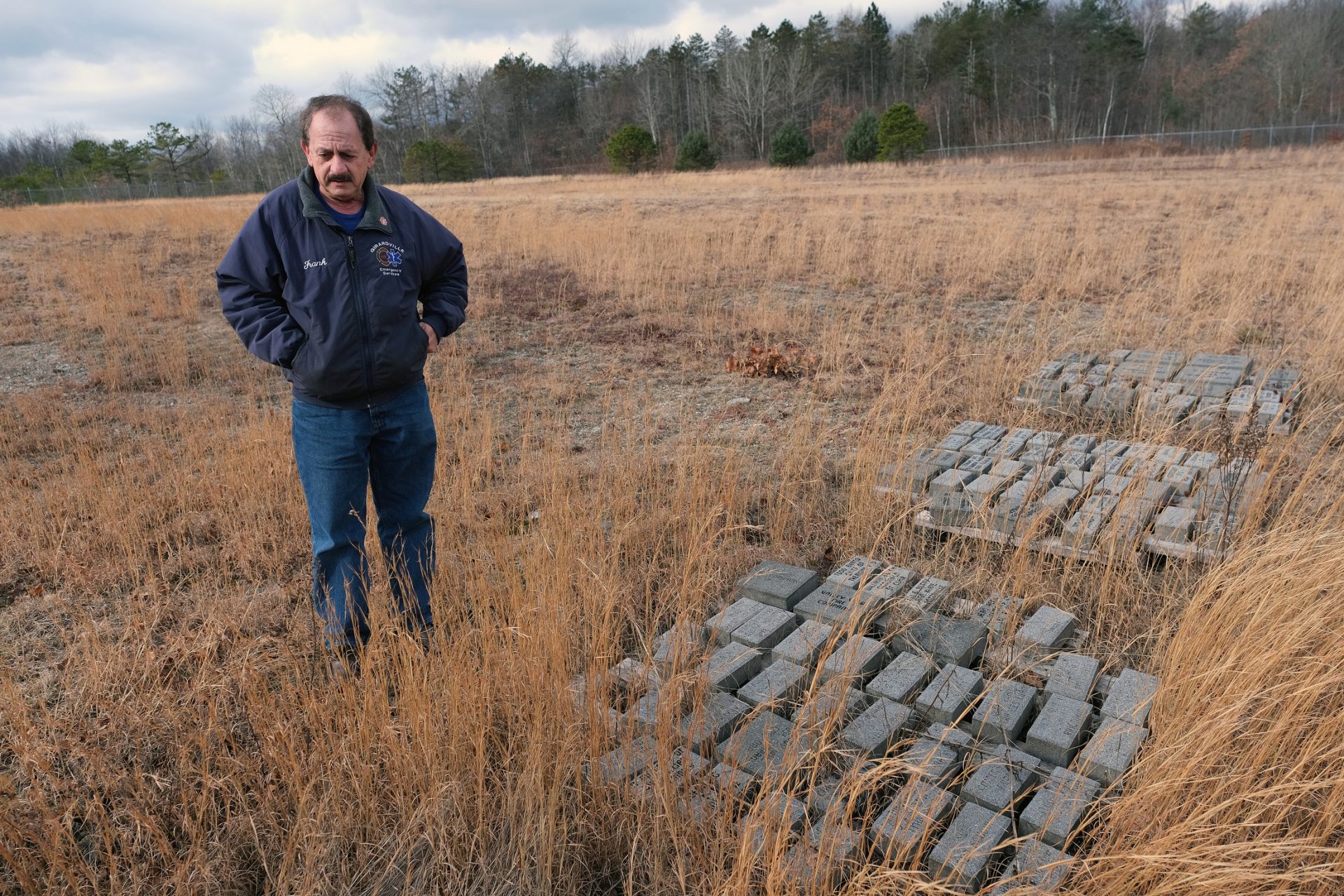 Matt Smith for Keystone Crossroads. Frank Zangari, with the Schuylkill County Fire Chiefs Association, points out name bricks as he talks about renovations Jan. 16, 2020, at the Fallen Firefighters Memorial in Frackville, Pennsylvania.

“If you could post a sign out front, here’s what the sign would say: ‘Apply for a job here. No permanent hours, working holidays, family vacations, no overtime pay. Please pay your dues and be a member here in our fire company,’” said Frank Zangari, Girardville fire chief and 30-year president of the Schuylkill County Fire Chiefs Association.

It’s not just public safety that’s threatened. A beloved tradition feels at risk too. Fire companies play a special role in Schuylkill County, where anthracite coal was discovered in 1790. Mining boom towns sprung up, built by immigrants from Wales, Poland, Germany and Ukraine. They were comprised of rowhouses with wood frames and connected attics, structures that burned easily.

An 1883 fire in Shenandoah wiped out 400 structures in a few hours — the opera house, the Academy of Music, the offices of the Mining Herald newspaper — until most of the Irish neighborhood had burned.

The Phoenix Fire Company No. 2 sprang up in its ashes, an Irish fire hall to serve the Irish of Shenandoah. 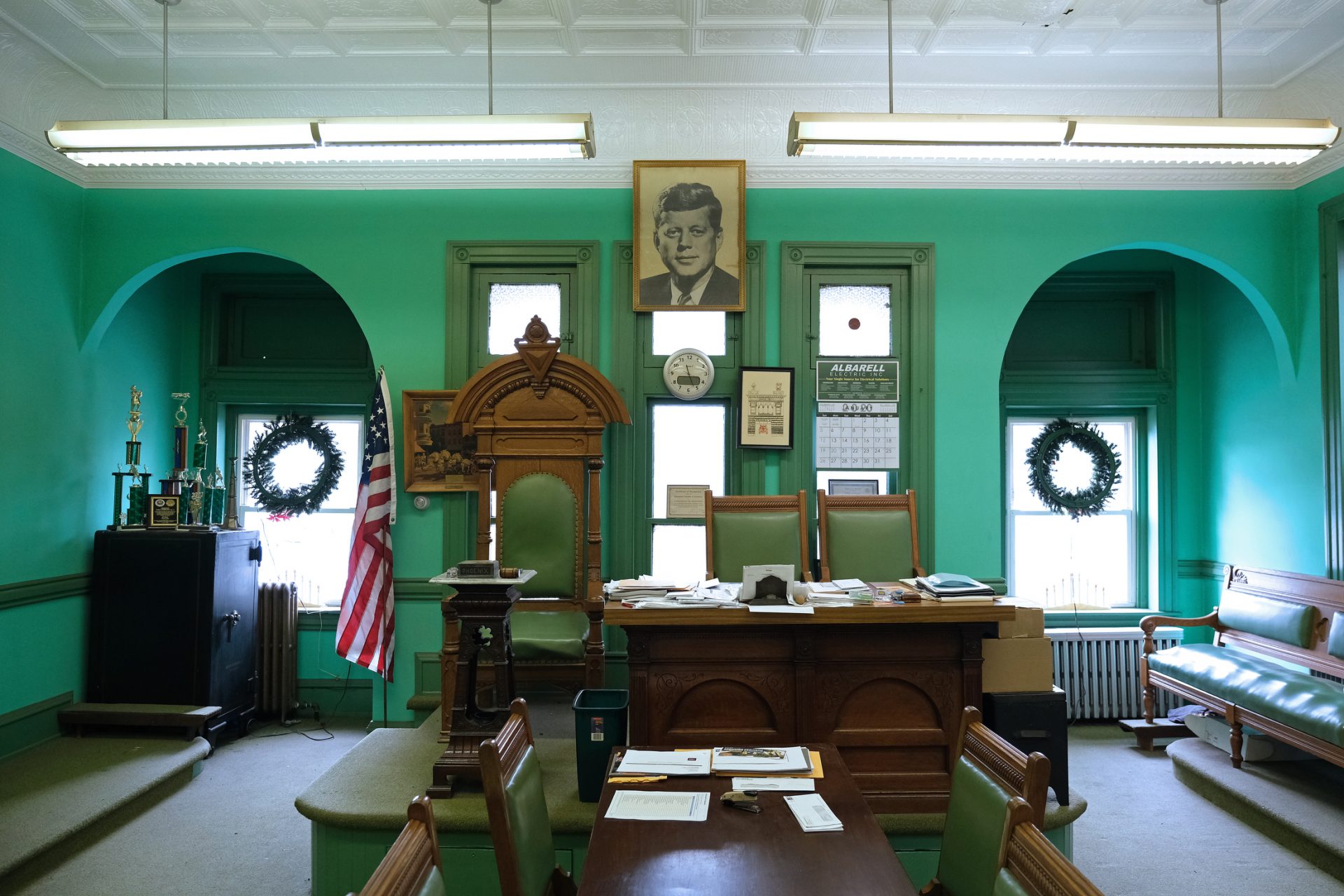 Matt Smith for Keystone Crossroads. Inside the meeting room of the 19th century Phoenix Fire Company No. 2 on Jan. 16, 2020, in Shenandoah, Pennsylvania.

The same story played out all across the county. Immigrant miners, merchants, and railroad workers constructed neighborhoods and then fire halls to protect them. Many had attached social halls and bars, where the community pitched in at dances and dinners to pay for hand carts, or better yet, steam engines, easier to chug up and down the hilly streets. They were proud structures christened with names that reflected their lofty ideals: the Citizens Fire Company, the Friendship Hook and Ladder Company, Independence, Vigilant, Hope, Good Will.

They were the jewels of their communities, part of what made coal country great. Their elegance reflected this. The Phoenix has hardwood floors, pressed tin ceilings, gilded portraits of members from the 1800s.

“Shows the support and the importance that this organization meant for these people,” said Kitsock. “The churches were infinitely important, but the churches became important on holy days and on Sundays. We have 365 days a year in which people can lose life and property here.”

But whereas the Phoenix once had to limit membership to 220 people at a time, today there’s only 50 volunteers, and fewer than 20 still actively respond to fires.

As in other rural areas, Schuylkill County’s population has dropped year after year, from 235,000 in 1930 to 148,000 today. As these once grand towns fell into disrepair, old factories and vacant rowhomes with shoddy wiring become easy fodder for fires. With fewer volunteers, response times can be longer, leading to more destruction and loss of life.

The population decline is driven in part by young people, prime firefighter material, leaving in early adulthood and not returning. The county’s birth rate no longer exceeds its mortality rate.

Bas Slabbers for Keystone Crossroads. Firefighters gear and call box locations at the fire house of the Humane Fire Co., in Pottsville, PA, on December 15, 2019.

Gloria Donatti serves pancake breakfast at the Rainbow Hose Company in Schuylkill Haven every other week. Its social hall had been open for decades. Proceeds helped fund the firefighting, like paying for the engines in the bay next door.

She gestures around the kitchen. “This is my grandson, my daughter in law back there, this is my granddaughter, my son’s over there. We’re all family, friends, we’ve all been members here forever.”

But as of January 1st, the Rainbow’s bar is shut down. It will open for fundraising events like the pancake breakfasts, but no longer for drinks seven days a week.

“We don’t have enough business to keep it open,” said Donatti.

Wealthier townships are less dependent on fundraising and volunteers to keep their firehouses running. Some, like Upper Merion in Montgomery County, now pay some firefighters to pick up the slack.

Schuylkill County and many rural areas can’t afford that. So, the state has an unpopular suggestion: consolidation. Firehouses would merge, blending members and resources. It’s a strategy becoming more common across the state.

“The older members, we’re against it. I have history here,” said Robert ‘Ace’ Dusel, an active volunteer at 71 years old with the Good Will Fire Company in Pottsville. 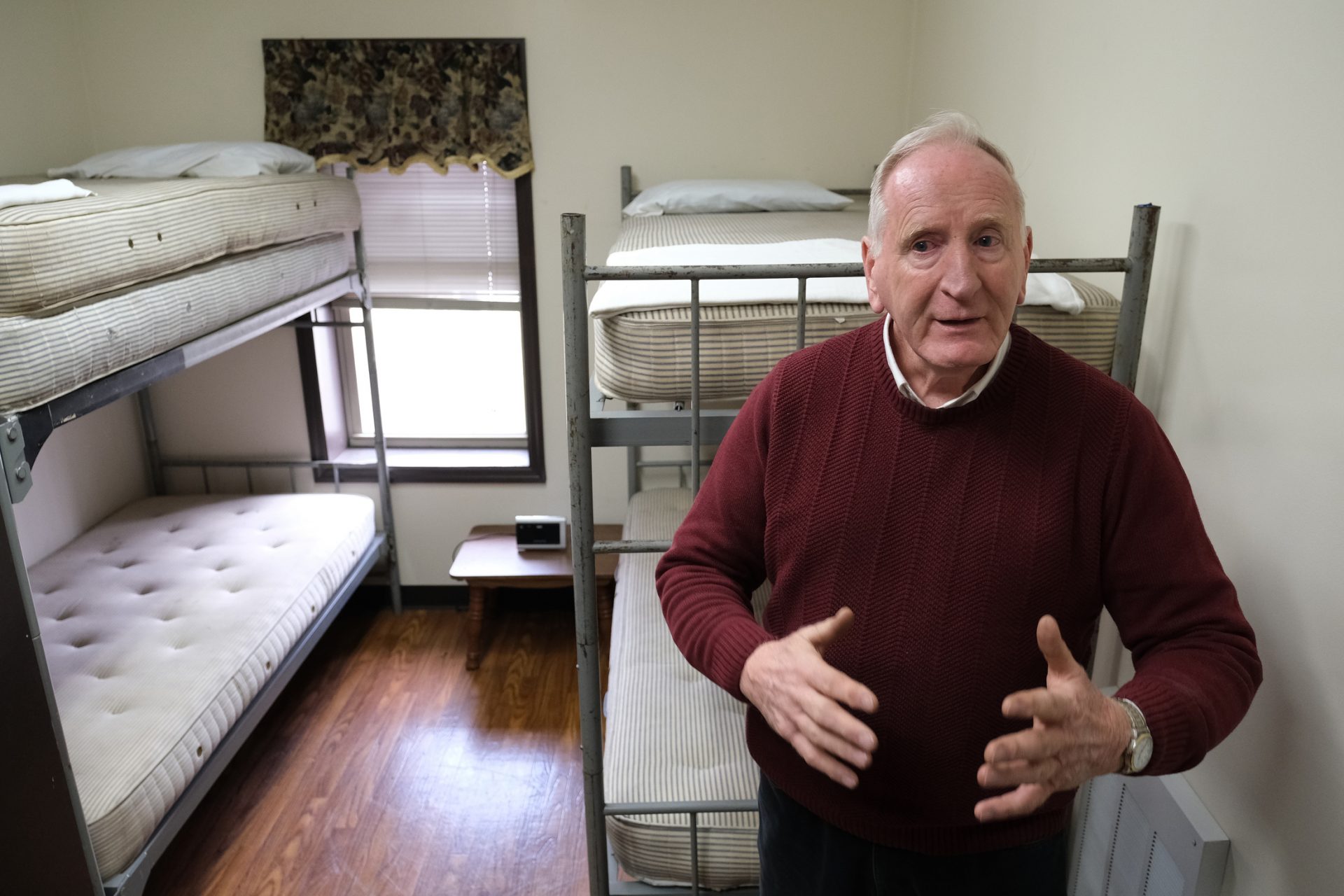 Matt Smith / Keystone Crossroads. Robert Dusel talks about firefighters staying over in bunks in the past while speaking Jan. 16, 2020, at Good Will Fire Company No. 4 in Pottsville, Pennsylvania.

Kitsock jumped in. “There’s more to it than just firefighting end of it. This is your culture, this is part of your existence.” Older volunteers, sometimes third and fourth generation firefighters, may leave the fire service altogether rather than join a new company.

“The thousands of hours that these families put into these fire companies,” Kitsock trailed off, remembering. “To lose that is so tragic.” 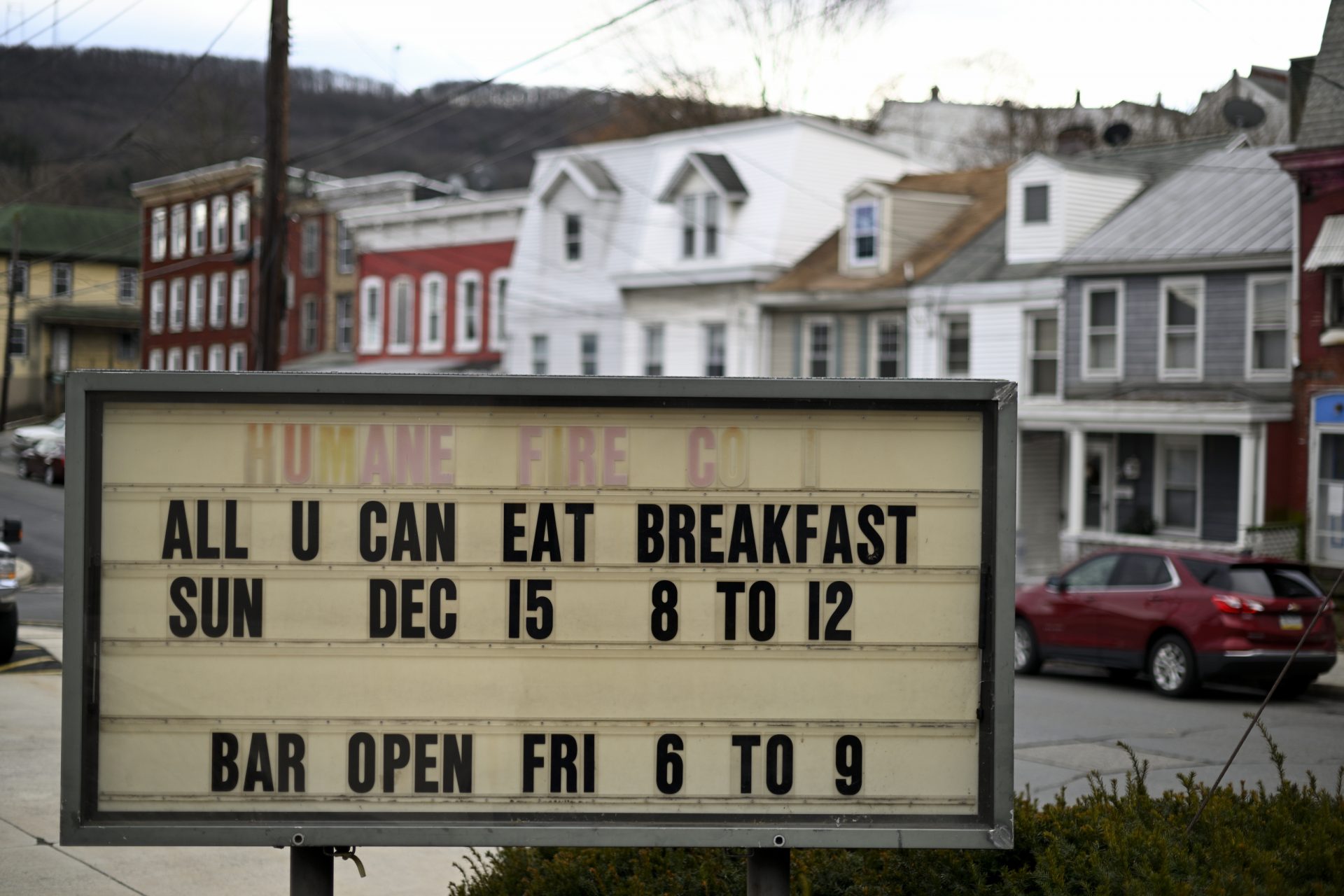 Bas Slabbers / Keystone Crossroads. Upcoming social events held at the companies social hall are announced on the board outside Humane Fire Co., in Pottsville, PA, on December 15, 2019.

In a presidential election year, it’s common for candidates to pay lip service to the needs of rural America.

But, often, the day-to-day problems facing less populated parts of the country don’t end up in stump speeches.

There’s no quick fix and the issues aren’t often the stuff of headlines.

In Schuylkill County, Kitsock and his friends don’t mind.  When it comes to the volunteer firefighter shortage, they aren’t looking to politicians to solve the problem. The state fire commissioner estimates it would cost around $10 billion to replace Pennsylvania’s volunteer firefighting force with a paid one. Kitsock knows that won’t happen.

What he wants is his friends and neighbors to step up.

“I don’t know if young people today are willing to make that commitment,” he said. 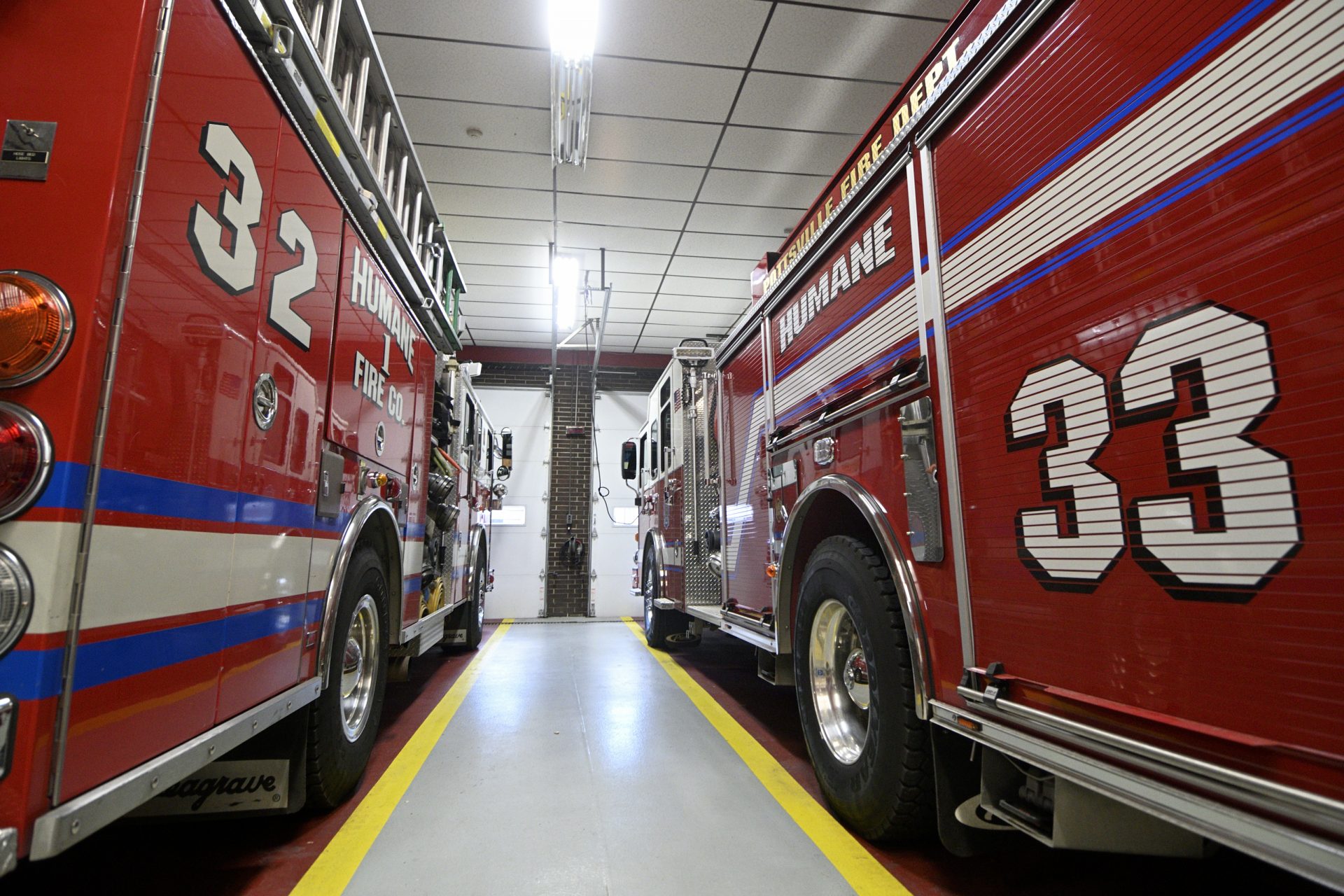 Some are, like Hattie Ebling, 17, a high school senior in Pottsville. Despite her other commitments in sketch club, drama club, as a dancer, dance teacher, and the Pottsville mascot, she is following in her father and brother’s footsteps as a junior firefighter at the American Hose Company No. 4.

“You are the puppy of the firehouse,” she said. “You kind of have to follow your older members and you have to see what they do.”

Hattie’s brother Brandon, 24, is the first lieutenant here. He sees the fire service aging around him and he’s noticed that, like the military, it’s almost generational — it’s harder to recruit people if their family members didn’t serve.

Recently, responding to a fire, he realized the other volunteers were all in their 40s and 50s.