STATE IMPACT PENNSYLVANIA – International trade brings in fruits and vegetables, computers and cars. But a downside to imports includes fighting against an onslaught of invasive species that hitch rides on wooden pallets, shipping containers, boxes and produce.

The spotted lanternfly, a brightly colored red and black moth and one of the latest invaders, landed in Pennsylvania’s Berks County around 2012 and has munched its way across 13 counties, threatening grapes, orchards and hardwood trees. State and federal officials want to stop it, and they’ve spent about $20 million this year on research and eradication efforts.

“We’ll go in with all of our force to try to eliminate that population before it can expand further and impact other businesses and industries outside of the region,” said Leo Donovall, the spotted lanternfly program director in Pennsylvania for the U.S. Department of Agriculture. “The ultimate goal is that we can potentially shrink this population down to the point where it is manageable or even potentially to eradicate it.”

Donovall helped identify the pest when it was first discovered in Berks County in 2014. He says in 2016, the lantern fly infestation covered about 174 square miles. By the end of 2017, more than 3,000 square miles in southeastern Pennsylvania had spotted lanternflies, primarily in Berks, Montgomery, Northampton and Lehigh counties. The USDA will hire about 100 people this summer and spend $17.5 million to stop its spread.

The federal government is working with the state Department of Agriculture as well as Penn State’s extension service on research projects and public education. Emilie Swackhammer works for the extension service doing public outreach.

“I’ve seen other invasive insects like the emerald ash borer,” said Swackhammer, who has worked for Penn State for 23 years. “The spotted lantern fly is unique because it has the potential to effect everybody in the state of Pennsylvania. I’ve never seen an insect situation like this before.”

Spotted lanternflies are an invasive species that threaten plants including fruit and hardwood trees.

Fred Strathmeyer, a deputy secretary at Pennsylvania’s Department of Agriculture, said an estimated $18 billion to $20 billion — or more — of industry in the state could be affected.

The greatest fear is the bug’s impact on grapes and the wine industry.

“You can only imagine if spotted lanternfly were to end up in the Napa Valley for instance. Now that not would not be a good moment,” Strathmeyer said.

The Port of Philadelphia includes a number of facilities along the Delaware River, which handle more than 50,000 shipping containers a month. More produce comes through the port than any other in the nation.

Officials say the spotted lanternfly arrived from Asia on a boat or a plane carrying imported goods. Customs and Border Protection is responsible for inspecting all that cargo for invasive plants and animals.

Their inspection station, a giant warehouse tucked away on an industrial side street between the Schuylkill expressway and the PES refinery, smells, surprisingly, of pineapples. Workers unload large tractor trailers full of cartons of potato chips, barrels of honey and pallets of tires. Armed customs officials lead drug sniffing dogs around, hunting for hidden cargo. 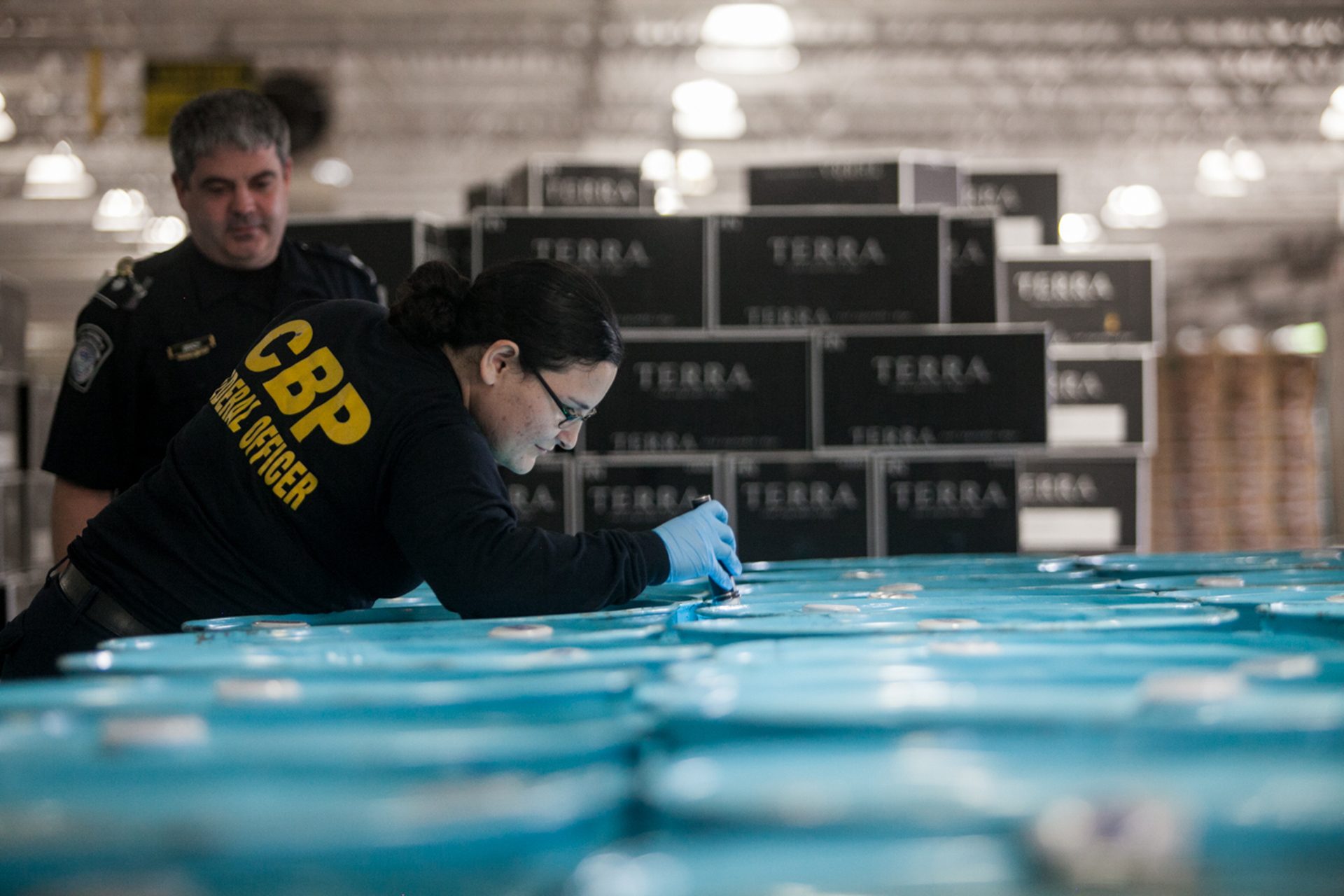 Armed with a biology degree and a good flashlight, Logan Alcala looks through boxes of central American plantains, carefully examining each one, not for cocaine, but for bugs and seeds.

“Not a lot of people are willing to be on their knees all day and that’s the downfall,”Alcala said. “But once you find those bugs it’s kind of like a little addiction because, you know, it’s just so satisfying.”

Alcala is one of about 35 people who spend each day searching for hitchhiking bugs and plants. Angling her flashlight just right, she spots a spider and a seed on top of a barrel of honey from Vietnam.

“You can see it pops out with the flashlight,” she said. “Those tiny little hairs on the seed, that’s what you’re looking for.”

Alcala and her colleagues are the first line of defense against invasive species. And last year, she and her colleagues found 475 potentially harmful bugs and seeds — referred to as “actionable” — coming in through the port of Philadelphia.

When Alcala does find an actionable bug, the shipment has to get fumigated or sent back to the country of origin. But given the amount of goods arriving at the nation’s ports each day, it’s almost impossible to keep all invasive plants and animals out. 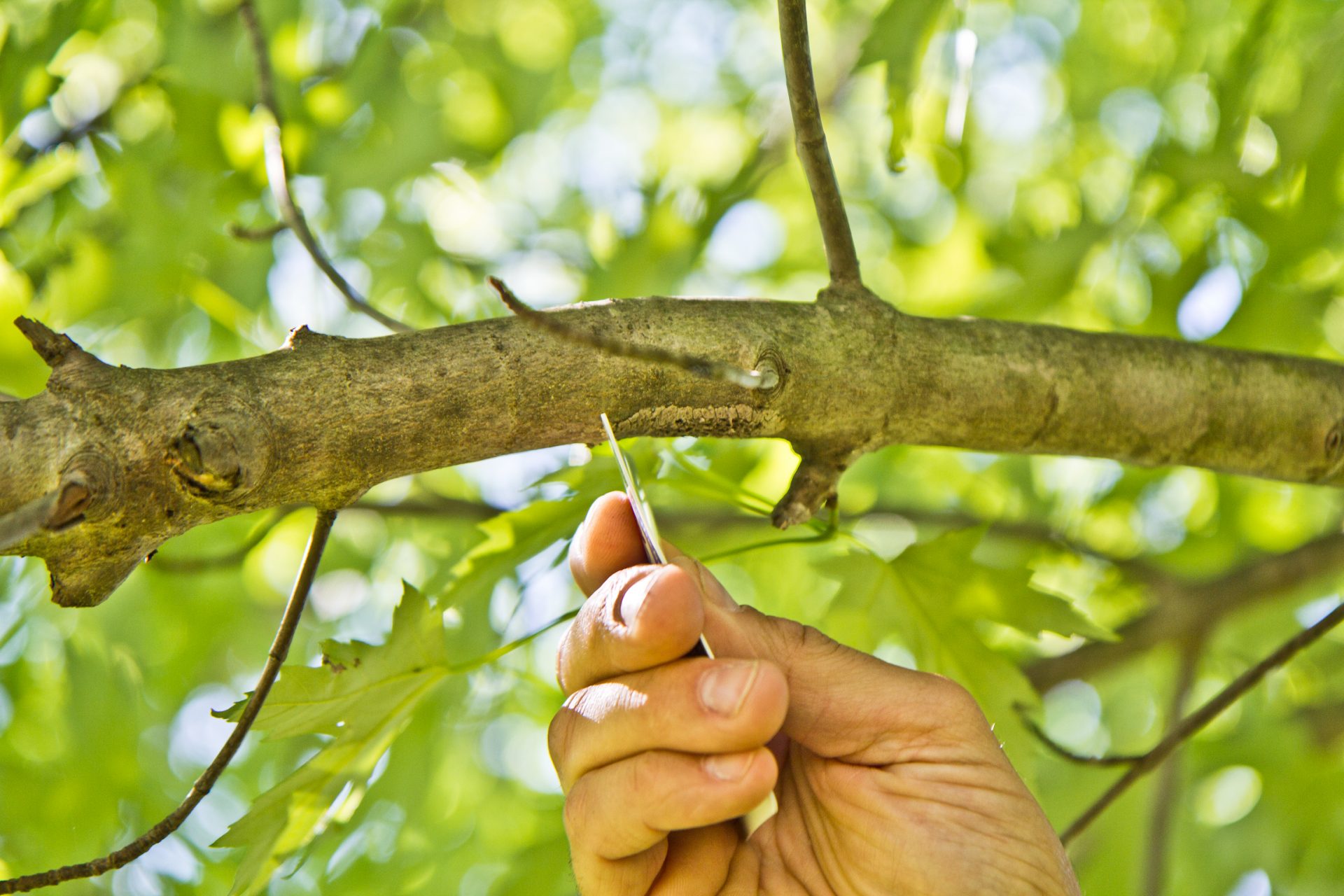 Whacking them with whiffle ball bats

Arborist David Paar first saw the brightly colored red and black moth while grilling on his deck with his kids in Montgomery County in the spring of 2015.

“I looked up and I saw an adult and said, ‘Oh my word. This is the spotted lanternfly. Kids come take a look.’ Because I trapped it and put it in a jar, and said, ‘This is what we need to be on the lookout for.’”

Paar owns his own tree business, called Arborescence, and is trained to spot pests.

“And they said, ‘Oh, yeah, Dad, we know they’re all over our trees.’ I said, ‘What do you mean they’re all over trees?! And sure enough I go out and look. They had been knocking them off and playing with them and whacking them with wiffle ball bats.”

David Paar, owner of Arborescence in Montgomery County, hands out cards that help people spot the different stages of the spotted lanternfly.

Paar began getting calls from homeowners about a year ago, desperate to save their trees from the pests. On a sunny day in June, he worked at a home in Collegeville, which has a large yard with several maples and willows infested with young lanternfly nymphs.

At this time of year, the nymphs look like a black beetle with white spots. In July, they will develop red spots, and then become adult moths in August. He inspects a silver maple he’s been treating with bands of sticky thick plastic designed to trap the nymphs after they hatch and crawl up the tree.

The bands are full of dead nymphs.

The spotted lanternfly is known as a plant-hopper – they hop around and suck sap from just about anything, including trees, shrubs, and herbs.

They’re easy to kill with pesticides, but those chemicals will also kill all the good bugs, so Paar says he tries to avoid that.

A big challenge is that the moths will lay their eggs on everything — furniture, rocks, toys cars — which can then transport them across the country.

“If you look up under the picnic tables and benches, you’re going to find eggs,” he says. 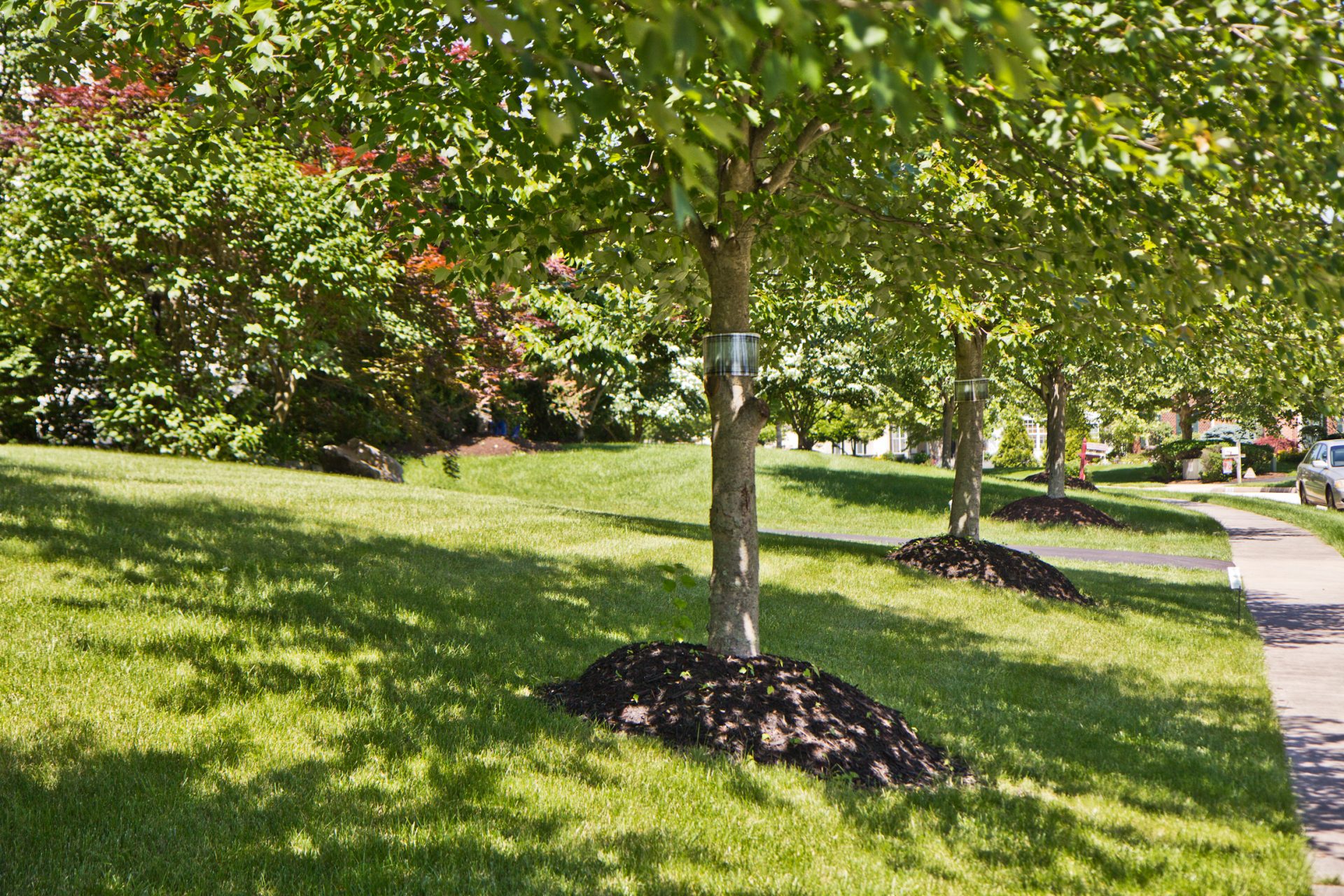 Kimberly Paynter / WHYY Sticky bands around trees in Collegeville. The bands will trap the nymphs, preventing them from feeding and hurting the tree.

Raining excrement in the suburbs and city

In addition to weakening trees by feeding on them as nymphs, the adult lanternflies do even more damage. They excrete a sticky sweet substance called honey dew after they eat, which covers leaves and bark. That substance attracts black sooty mold, which grows on the tree, preventing photosynthesis.

David Paar says the honey dew and the slippery black mold have ended up all over decks and swingsets in the suburbs.

This willow tree in Collegeville, Montgomery County is infested with spotted lanternfly nymphs.

“It’s going to have a big impact,” he said. “And if we had the adults right now feeding on these trees, on a willow tree in particular, it would literally be raining excrement on you. And we would leave here a sticky mess.”

The adult spotted lanternflies love to feast on an invasive plant species – the Ailanthus tree, which came to the U.S. from China more than two hundred years ago. The ailanthus tree, or “Tree of Heaven,” is now a ubiquitous urban weed tree.

“So just think of all the ailanthus trees in Philadelphia,” he said. “They line all the backs of properties and grow along rail lines. If you go look there this time next year, everything underneath those trees is going to be black much like soot in the city. Not from particulate matter and air pollution, but this is going to be black from insect poop.”

Officials are happy that the spotted lanternfly could end up killing off invasive ailanthus trees, and researchers are working on projects that use the ailanthus tree to trap the pest as part of its eradication program. The USDA is sending researchers to China to find out more about the bug’s habits and life cycle. Meanwhile, 13 counties in southeastern Pennsylvania are under a quarantine, meaning that any business that might transport plants or produce infected with the bug has to do online training and carry a permit if they travel outside of the quarantine area.

State and federal officials are optimistic they can at least contain it, but this spring, a thriving population of spotted lanternflies were discovered in Virginia for the first time.

Paar says killing the lanternfly, just like the invasive emerald ash borer and the stink bugs that have come before it, will continue to be a large part of his business.