Spring is one of Mason Heberling’s favorite times of the year.

“But also, as a researcher studying it, so much stuff is happening right now, it keeps us up at night,” he said. “Did we remember to check that plant?”

Heberling is the assistant curator of botany at the Carnegie Museum of Natural History in Pittsburgh, and a plant ecologist. Right now, he and collaborators from the University of Pittsburgh and Boston University are at the beginning of a three year research project, funded by a  $645,767 award by the National Science Foundation, to study the impacts of climate change and invasive plants on the phenology of wildflowers and trees.

“Phenology is the timing of biological events or seasonal events that are repeating, and occur year to year, like the arrival of migrating birds back to Pennsylvania, the emergence of butterflies, or the leaf out of trees and wildflowers,” Heberling said.

Species respond to different temperature and light cues which signal these seasonal changes, or even to Earth’s gravitational shifts, according to Sara Kuebbing, an assistant professor in the Department of Biological Sciences at the University of Pittsburgh working on the study. She said global warming is changing the behavior of some species that rely on temperature cues, for example, when the arrival of spring is earlier and warmer than in the past.

“But species that aren’t regulated by temperature, or don’t make their decisions based only or solely on temperature cues, are maybe not changing as quickly,” Kuebbing said.  “We call those phenological mismatches.” 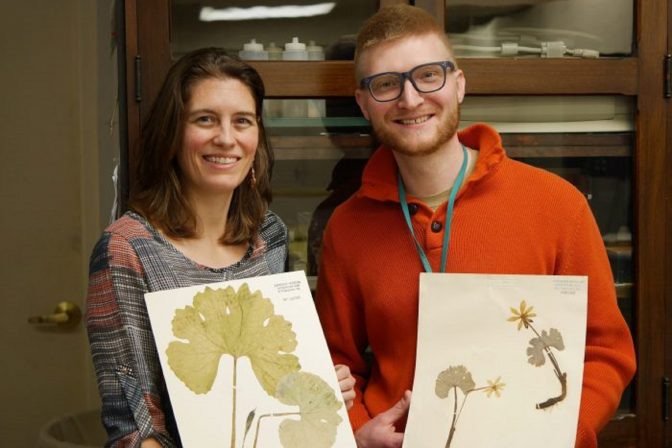 Kara Holsopple / The Allegheny Front. Sara Kuebbing and Mason Heberling with specimens from Carnegie Museum of Natural History’s herbarium collection. Bloodroot plants collected 100 years apart show that some species are leafing out and blooming earlier than in previous decades.

The new study expands on Heberling’s previous work with Richard Primack, a professor of biology at Boston University, who is also involved in the new collaboration. Primack and his colleagues compared detailed descriptions of nature from Henry David Thoreau’s “Walden,” written in the 1850s, to the trees and plants growing there in Massachusetts today. They found that in warmer springs, plants leaf out earlier.

“But what was kind of shocking, and not exactly expected, was that trees, as a group, are more responsive to these temperature shifts than wildflowers,” Heberling said.

Woodland trees began to leaf a week earlier than the wildflowers below on the forest floor. Heberling said that leads to some wildflowers being shaded out by trees at an important time in their life cycles. The impacts of this phenological mismatch will be explored in this new study, as well as how non-native shrubs impact wildflowers.

“I realized that Mason and his colleagues were talking a lot about the things around our feet when we walk through the forest, like the wildflowers, and the trees and things above our heads,” Kuebbing said. “But as someone who thinks a lot about non-native species in forests, I realized they were not thinking about the things you run into or that prick you when you walk through the forest.”

Non-native shrubs intentionally planted for ornamental purposes, like the prickly multiflora rose, have taken over many forested areas in Pennsylvania. Kuebbing said these knee or waist-high non-native shrubs are often the earliest to bud and leaf, adding another layer to shelter or shade for spring wildflowers.

Kuebbing and Heberling are collecting data on wildflowers, trees and shrubs from four sites near Pittsburgh, including Beechwood Farms Nature Reserve, run by the Audubon Society of Western Pennsylvania. In one study plot there, five species of wildflowers were overwintered, then taken to a lab at Pitt to flower, so the researchers could control temperature and light cues.

Specimens from the Carnegie Museum of Natural History’s extensive herbarium collection also will be referenced in the study, showing how the leafing and budding of certain species has changed over decades.

“The changing of the timing of when these plants are flowering and fruiting affects who eats their seeds, it affects their pollinators,” Kuebbing said. “And so I think there could be a lot of potentially cascading effects as things are shifting and moving and responding to these changes in climate, which are happening really rapidly.”

Heberling adds that wildflowers make up the majority of the species richness of forests, and are important for preserving biodiversity in the ecosystem.