KEYSTONE CROSSROADS – Latonta Godboldt is proud of the business she has built out of the living room of her two-story rowhouse in North Philadelphia.

There, she and her husband run Small Wonders Family Child Care, typically watching about a dozen kids, including relatives, every day.

Latonta Godboldt is the owner, operator and director of Small Wonders, a daycare in Philadelphia. (Kimberly Paynter/WHYY)

But as child care providers across Pennsylvania closed their doors in response to Gov. Tom Wolf’s shutdown order last month, Godboldt, 37, had one big question on her mind — what should I do?

State officials ordered most child care providers to close – later allowing providers that cared for children of “essential” workers to apply for a waiver to re-open — but those based in a provider’s residence were exempt from the regulations.

As other businesses across the state shuttered to slow the spread of coronavirus, Godboldt found the state’s guidance to be murky.

“My son is asthmatic. I am asthmatic. We are really at risk,” said Godboldt, who has three teenage children and a twelve-year-old. “The state is giving us the choice: ‘you decide.’ So it’s a really uncomfortable position to be in.”

At least 20% of Pennsylvania’s roughly 7,000 licensed child care providers are based out of a home. These providers, which usually care for half a dozen kids at a time, are a critical part of the child care system, generally offering cheaper and more flexible care than larger facilities run out of commercial spaces.

As advocates and lawmakers push for emergency aid for the broader child care industry, many “family” providers like Godboldt feel left out of the conversation, forced to navigate by themselves potentially perilous questions of health, finances and obligations to the families they serve.

“It’s the government’s role to make hard decisions, and then ask people to step forward if they want to remain open,” said Donna Cooper, executive director of Public Citizens for Children and Youth. “Because there was this gray area with home-based providers, they weren’t even in that conversation.”

‘We are all stuck here’

After closing for a few days to stock up on soap, paper towels and other cleaning supplies, Godboldt decided to stay open, but just for those kids whose parents had to keep reporting to work.

“I don’t want to put myself in the predicament of letting down families I know have absolutely no option,” she said.

Statewide, about a third of residential child care providers have made the same decision, according to a state spokesperson.

The decision was a financial one as well. Godboldt has invested tens of thousand of dollars on a commercial child care center she was planning to open this year — a plan that is now indefinitely delayed. The income she receives for the four kids she is still caring for, Godboldt said, is helping keep her afloat.

“Unlike [commercial child care] centers, if something goes wrong we can’t shut down for fourteen days and air it out,” said Goldboldt of her family. “We are all stuck here, and have to deal with those consequences.”

Pennsylvania’s Office of Child Development and Early Learning (OCDEL) issued guidelines to providers for staying safe in the pandemic; it recommends they “limit item sharing” among children and keep them six feet away from each other.

“We are talking about people caring for children in their homes,” she said. “How do they keep them six feet apart?”

Providers who need help finding supplies should reach out to the Pennsylvania Emergency Management Agency, a Department of Human Services spokesperson wrote in an email.

“[I can only] use what I have left and keep checking every day,” she said. 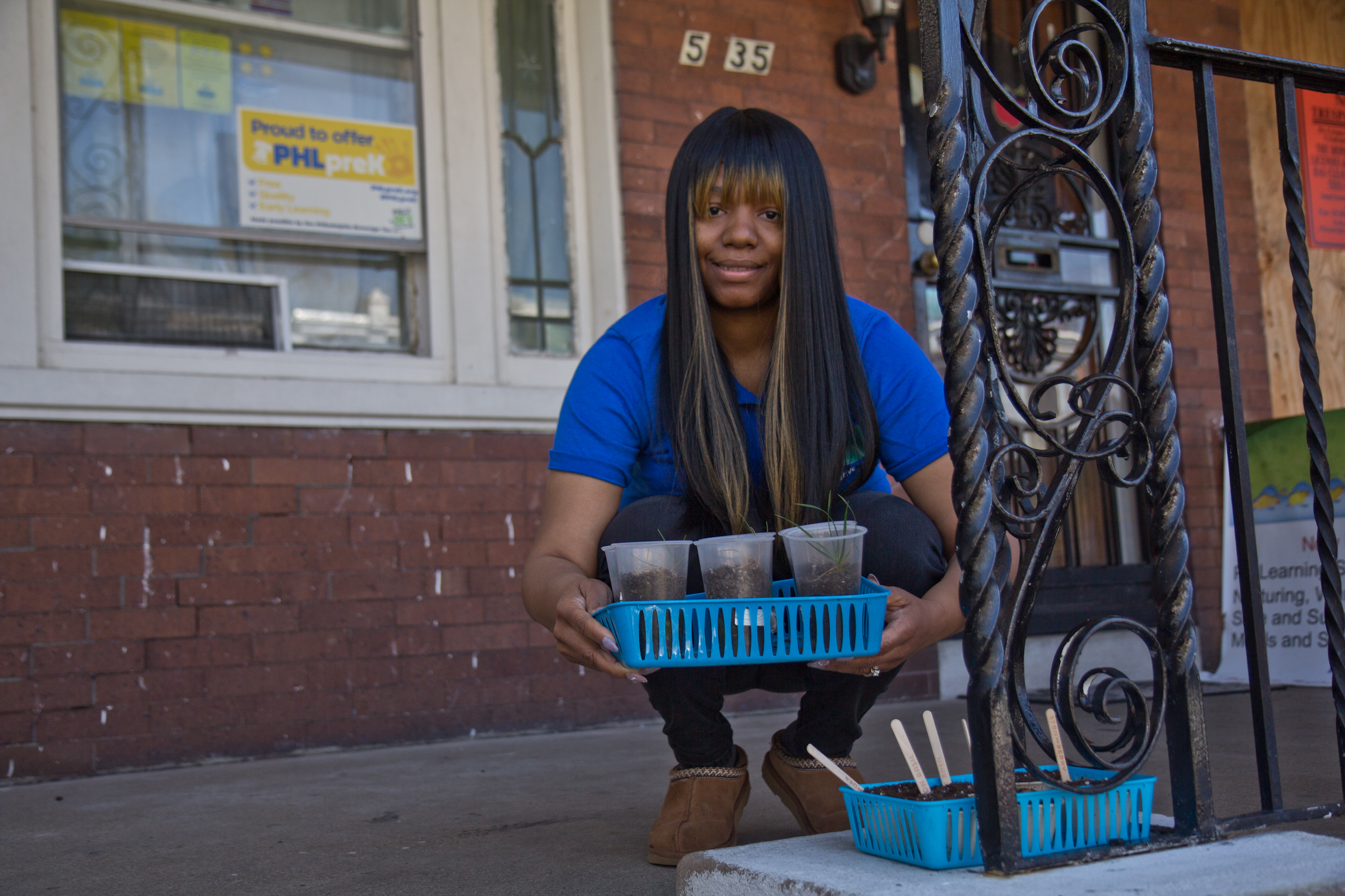 Latonta Godboldt, owner of Small Wonders, a daycare in Philadelphia, inspects herbs and fruits the children in her care have planted. (Kimberly Paynter/WHYY)

After thirty years of providing child care out of her home in Danville, Pa., Denise Cressman’s family and business are too deeply intertwined for her to separate.

Each of the parents of the six young boys she currently provides care for either spent time at her home when they were children as friends of her kids — or went to her day care themselves.

“I’m a second mom to a lot of these parents,” Cressman said. “The emotional bonds we form with our families is just so strong.”

On March 21, Cressman made the painful decision to close her child care down. Her husband’s chronic obstructive pulmonary disease and emphysema, left her with no other choice.

“This disease could be a death sentence for him,” she said.

Cressman, 65, said the decision was financially difficult as well. Confronted by a sudden loss of income, Cressman looked to apply for unemployment benefits, which have been filed for by more than 1.2 million Pennsylvanians as of April 9. Traditionally, unemployment has not been available for sole-proprietors like Cressman, but the federal CARES Act stimulus package, signed by President Donald Trump in March, expands those benefits to self-employed people.

Yet, by last Friday, Cressman was still refreshing Pennsylvania’s unemployment website again and again, waiting for some guidance for how self-employed people should apply.

“We can’t seem to get an answer,” Cressman said. “I’m in a panic over how to keep a roof over my business and pay bills.”

“Pennsylvania doesn’t quite know what to do with these folks,” said Jeffrey Campolongo, a lawyer who has been advising child care providers on unemployment issues.

The state Department of Labor and Industry is preparing a special application for self-employed people seeking unemployment benefits, but as of Friday it was not ready yet.

“The department is working as fast as possible to complete the process and will provide more information in the coming days,” an agency spokesperson wrote in an email.

Campolongo said that delay has led many providers to apply for unemployment as “employees,” causing them to be rejected.

“Which shouldn’t happen, [but] these folks don’t know what category to fit themselves into,” Campolongo said.

Pennsylvania has committed to paying subsidies to providers who care for kids enrolled in Child Care Works — a state program that helps low-income families — through April 30, regardless of whether they are open or not.

A Department of Human Services spokesperson said it would announce whether those payments will continue after the end of the month next week.

Cressman had been hoping to re-open in May, but she said that looked increasingly unlikely. Last week, the family of one of the boys she cares for dropped out of her program. Now, Cressman said, she’s considering whether it’s time to retire.

“It’s really hard right now to think about what the future is going to hold,” she said. “I am going to have to weigh: Do I just collect social security, or do I put forth the additional effort to get through this … and can I open back up for the kids and families that are depending on me?”

After a few weeks of paid time off, Ortiz, 46, has returned to work as a customer service representative at a Philadelphia Home Depot.

Her two boys, nine and six, are back spending their days at Small Wonders, Latonta Godblodt’s family child care program.

“I have to pay for rent, bills, food for the boys,” Ortiz said. “So [the day care being open] has a big impact.”

Still, Ortiz worries about exposing her children to coronavirus, who could then expose others at the day care program.