HARRISBURG, PA (WSKG) – Two groups that want to change the way Pennsylvania’s political boundaries are drawn took to the Capitol this week to unveil their own sets of publicly-drawn state and Congressional maps.

Their efforts have been years in the making. State lawmakers have traditionally controlled the once-in-a-decade processes that reshape Pa.’s districts and have had little incentive to solicit public input.

But the way lines are drawn is receiving extra scrutiny this time, in part because the state Supreme Court ruled a 2011 Congressional map unconstitutionally gerrymandered in 2018 and drew its own map that’s been used in elections since.

Those areas had the most growth among communities of color, according to an analysis conducted by advocacy nonprofit group Pennsylvania Voice.

The groups are lobbying the Legislative Reapportionment Commission to consider its group of maps as it begins sketching out a draft map. Lawmakers have just under 90 days to draw political boundaries.

“When we’re talking about representation in the state of Pennsylvania, that process has to start with the people,” said Salewa Ogunmefun, executive director of Pennsylvania Voice, during a rally at the Capitol steps. “No one knows their lives, no one knows the boundaries of their communities better than the actual community members.” 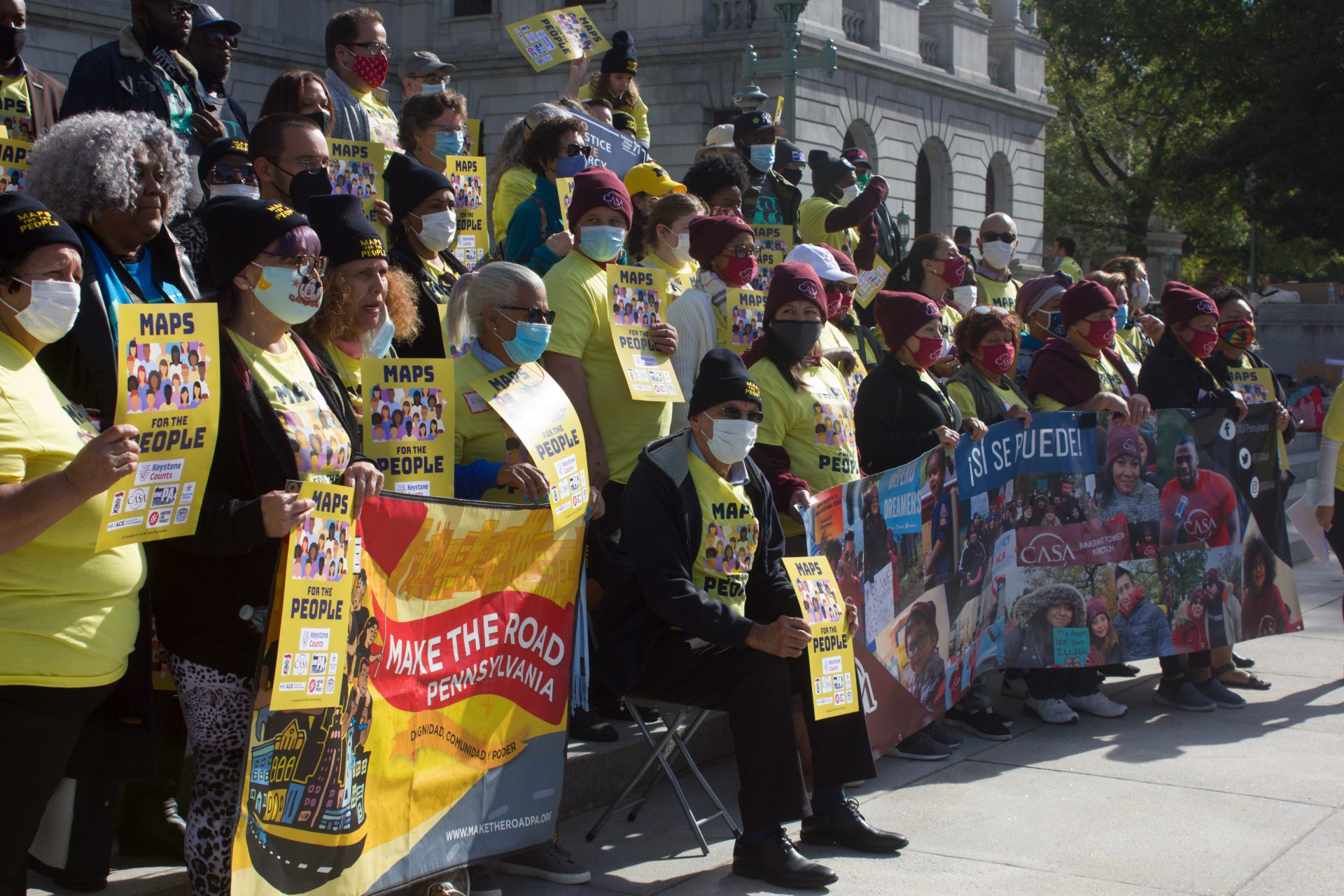 Gabriela Martínez / WITF. Demonstrators organized by advocacy group Pennsylvania Voice rally on the steps of the state Capitol on Oct. 28, 2021.

Ogunmefun’s group pieced together more than 700 community maps to draw its set of maps.

Ramón Díaz, who moved from Puerto Rico to Lancaster five years ago, has been working to involve Latino residents in the redistricting process. He is a member of CASA, a nonprofit that advocates for Latino communities.

“In Puerto Rico, many of us feel like our votes and voices don’t count,” Díaz said. “That is why I’m committed to make sure that this doesn’t happen here to us. We need to make sure that our electoral maps reflect the reality of our community without racial divisions and party interests.”

Claudia Guzmán from Reading says the proposed maps would ensure her vote matters. The current map “does not fairly represent our community.”

“My son’s school in Reading has so few funds that I have to pay in order for him to play a sport after school,” Guzmán said. “With this Unity map, we have the opportunity to elect a candidate of our choice who truly represents us. This will mean a lot for me and as a mother.”

Pennsylvania Voice says each map is designed to create more racial equitable districts in the areas they cover.

In Lancaster, the map would take into account the growth of Latino and mixed race population. It proposes dropping White, wealthier population from northwest Lancaster from the 96th House District. That map is based on 149 community map submissions.

The Berks County map, based on 114 maps submitted by community members, would split communities of color evenly between two districts.

Maria del Carmen Gutiérrez, director of membership for CASA, said her organization has been knocking on doors and organizing meetings to educate members about how district lines will impact them.

“We teach them, ‘Hey, let’s find out how large is your community?’ because your community is not your neighbors. It’s more than that,” she said.

Gutiérrez said that once people understand the expanse of their community — where they shop for groceries, go to church and drop off their children — they can see how the current electoral maps do not represent them.

Earlier this week, another group that’s geared its efforts toward redistricting released its own citizen-drawn Congressional map.

Draw the Lines PA, fronted by Committee of Seventy President and CEO David Thornburgh, unveiled its idea for the lines staking out districts for what will be the state’s 17-member delegation. Since Pennsylvania’s population dropped by 2.3 percent over the last decade according to the latest U.S. Census count, mapmakers will have to draw out one congressional district.

“This whole initiative demonstrates that the people of Pennsylvania are ready, willing and able to have a conversation with the folks in that building about how they should be represented,” Thornburgh said at a rally in front of the state Capitol Tuesday. 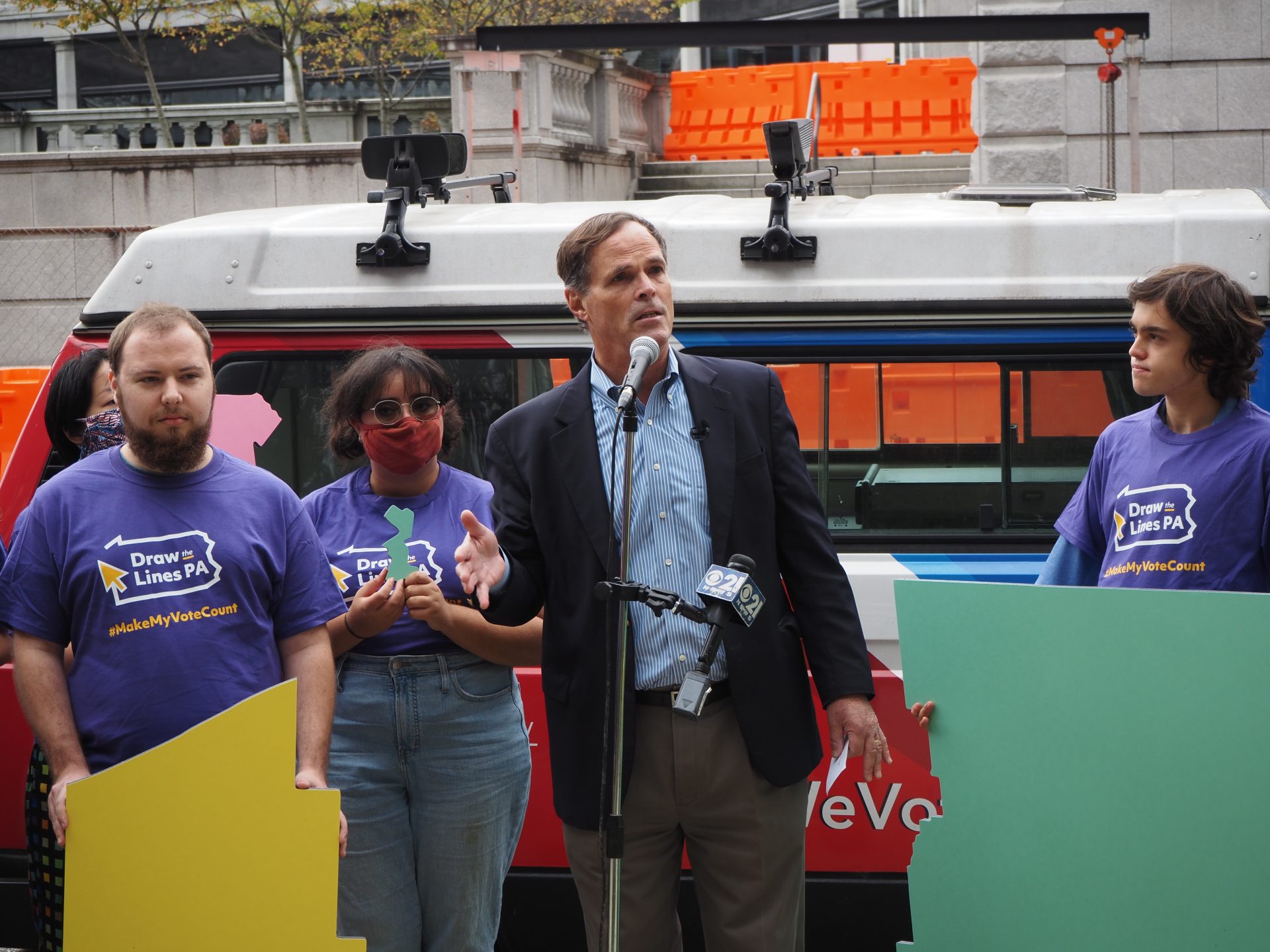 Sam Dunklau / WITF. Committee of Seventy President and CEO David Thornburgh leads a rally for the group’s redistricting-focused organization, Draw the Lines PA, at the state Capitol on Oct. 26, 2021.

The group said more than 7,000 people entered a total of 1,500 congressional maps in mapmaking competitions it’s held over the last few years. Each map had to adhere to strict guidelines that are spelled out in law: they had to divvy up the state’s population evenly, districts had to be contiguous — meaning one couldn’t horseshoe around another, for example — and they had to split up as few counties, towns and boroughs as possible.

Draw the Lines then created a composite of those maps that Thornburgh and others say is “far superior” to the Congressional redistricting plan state lawmakers came up with in 2011, claiming it splits half the number of counties and creates five competitive districts.

Anne Hanna, who helped craft the Draw the Lines map, said she got involved in the project after being disappointed about how she was being represented in what was the 1st Congressional District. That district now encompasses communities north and west of Philadelphia.

“I lived in one of the most gerrymandered districts in the state,” she said. “My voice was never heard in that district. He [former Democratic U.S. Rep. Bob Brady] didn’t care about any of us because there was no way anybody could possibly mount a conceivable challenge in that gerrymandered mess of disparate communities.”

Though they produced separate sets of maps, advocates from PA Voice and Draw the Lines say both groups are after the same thing: forcing lawmakers to buck the opaque redistricting processes of old in favor of methods that include from political and cultural groups across the state.

“We can do this process in the open, democratically, with input from everybody from all around the state,” Hanna said. “We did that. They can do it too.”