TRANSFORMING HEALTH — A state policy change will leave thousands of children with autism without the regular therapy that helps them learn crucial skills.

Children with autism often participate in therapy called applied behavior analysis. Proponents say it helps those children reach milestones such as communicating and interacting with others.

Under the policy change, set to take effect Jan. 17, children who attend regular therapy at clinics will no longer be able to have those services paid for by federal Medical Assistance. Such services would cost about $6,000 a month without health insurance, and even with health insurance are likely to cost more than $1,500, according to Kristine Quinby, who operates one such center.

The change happened after the state Department of Human Services agreed to develop a new behavioral services model to help children with autism in 2016. The new model was made public in late 2019. It was intended to add access to services, but advocates say, in this case, it has had the opposite effect.

Medical Assistance will still pay for sessions conducted at homes. However, that doesn’t work for some parents, said Drew Friedman of Montgomery County. His 5-year-old son Ari has autism and spends about 30 hours a week at a local center, Exceptional Connections.

Friedman is one of more than 3,500 people as of Monday morning who signed a petition calling on the state to reverse the decision and continue to cover the services.

Ari is non-vocal, and “lacks comprehension of the world around him,” Friedman said. Without constant supervision, he may eat inedible objects, remove his clothes, or wander outside.

“The clinic setting offers a predictable space where the use of his communication device enriches his opportunities to communicate,” Friedman wrote in a letter he sent to the governor’s office. “The environment is controlled and sanitized, so problem behaviors can be worked on in a safe and secure manner.”

Last January, Ari was making progress, Friedman said. He was communicating using an iPad and learning to use the bathroom. But when the coronavirus halted in-person therapy, Ari regressed. 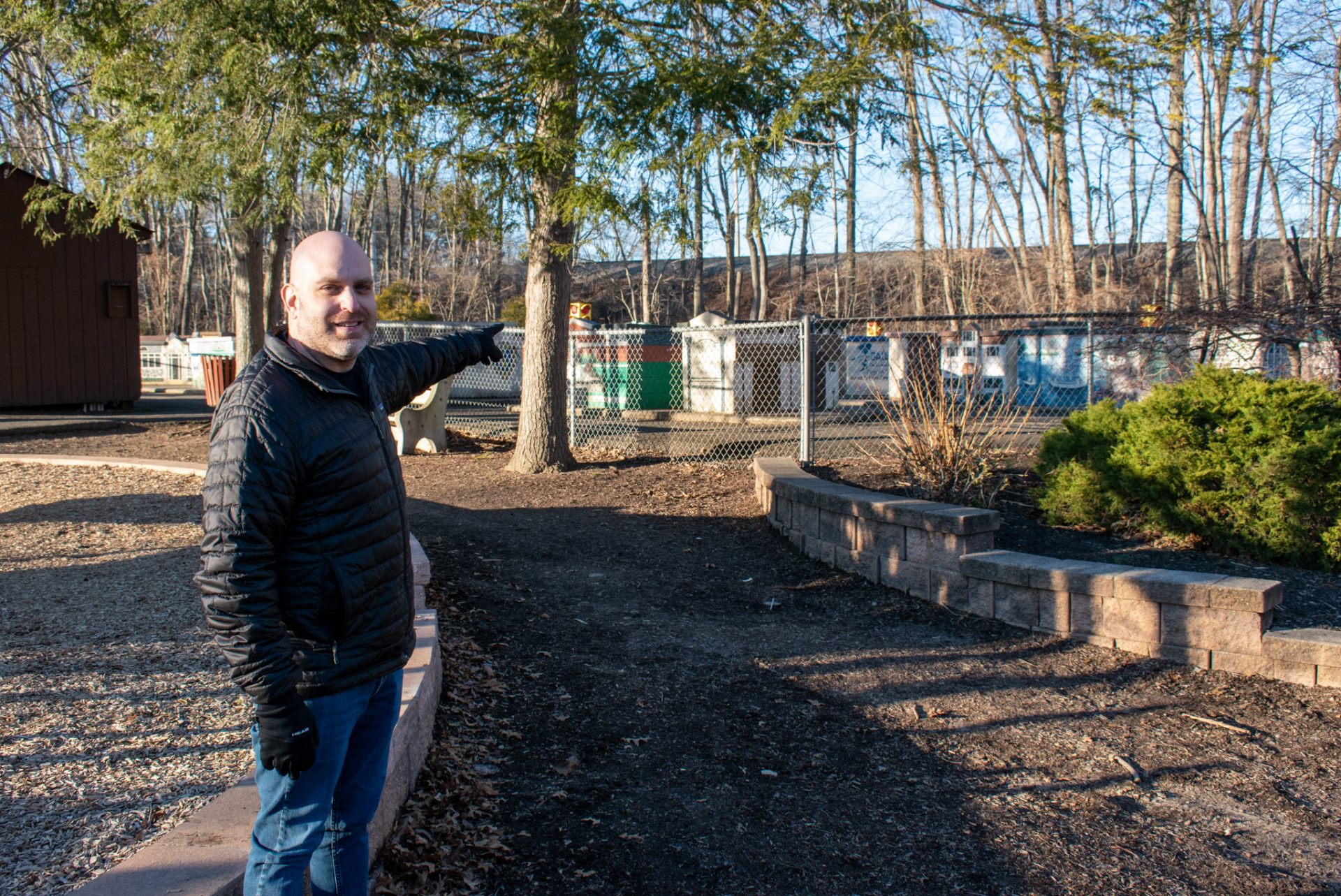 Brett Sholtis / Transforming Health Drew Friedman points to an enclosed area at Mason Mill Park where his son Ari likes to play. His son, who has autism, is one of thousands of children who will lose theirs center-based services on Jan. 17.

When Exceptional Connections reopened with safety precautions in July, Ari returned. With treatment, he is getting back to where he was before the pandemic, Friedman said. Changing Ari’s routine risks upending his progress again.

Because each child with autism is unique, the decision to conduct therapy at home or at a clinic should be up to the parent and the care provider, said Kristine Quinby, the founder of Potential Inc., a therapy center in Bucks County that will be affected by the change.

“Some kids really need the controlled environment that we can provide at a center,” she said.

Quinby worries that some families may opt out of services altogether—something that would hamper their development and risk keeping them from achieving their potential level of independence.

“I’ve worked with all age groups, and you can’t really measure the harm of not having access to services,” she said.

One benefit of center-based services is that there’s more interaction between the “behavior technicians” and the behavior analysts who develop programs tailored to each child, she said. While the technicians who work with children on a daily basis have taken a 40-hour certification course, the board certified behavior analysts have a master of science degree.

The coronavirus has further complicated the issue, Quinby said. Potential Inc. has taken precautions to protect children and workers. Employees practice social distancing. An ultraviolet light filters the air. A cleaning crew sanitizes the building every day. And areas are cleaned throughout the day.

In contrast, workers face a wide range of scenarios when doing in-home visits.

About half of her employees are afraid to work in homes during the pandemic, Quinby said. “If you’re going to tell me, before COVID is over, that you’re going to force them to go into the home, I can predict that there will be some of them that will quit.”

There are more than 100,000 children in Pennsylvania living with autism, said Jim Sharp, the Children’s Director of Policy at Rehabilitation and Community Providers Association in Harrisburg. With this policy change, thousands of children will lose center-based services.

The new policy program, known as “intensive behavioral health services,” was developed in response to a 2016 class action lawsuit against the Pennsylvania Department of Human Services. Advocacy group Disability Rights Network settled with the state after asserting that it was failing to provide proper treatments for children.

Sharp said he believes the problem is an “unintended consequence” of the state’s response to that settlement. When they agreed to what services fall under what medical billing codes, one-on-one therapy at clinics was incorrectly categorized as “group” treatment. He said his group is working with the state to remedy the problem.

The state is aware of parents’ concerns and “is committed to ensuring children, youth and young adults receive appropriate clinical services to meet their individual needs, and to do so in settings best able to provide a therapeutic environment to meet those needs,” Pennsylvania Department of Human Services spokesperson Erin James said in an email.

“We recognize that changes to program regulations and design can create uncertainty about continuity of care,” James said. “The changes our office is implementing are designed to ensure that services are meeting minimum licensing standards, provided by qualified staff and have regular oversight to ensure the wellbeing and safety of the children and youth we serve.”

Drew Friedman said if medical assistance won’t cover Ari’s treatment, he will see if his health insurance would pay for it. Friedman estimated that, with an $80 copay for each day that his son attends therapy, he would expect to pay about $1,720 a month.

For many parents, that won’t be an option, Friedman said.

“We’re going to figure out a way to get through this, but what about that working single mother whose child may have extreme impairments?” Friedman said. “What is that person supposed to do, in a pandemic?”