TRANSFORMING HEALTH — As I leave my house in Harrisburg and get into my car, I’m taking all the precautions I can, even though the only truly safe thing to do would be to stay home.

At right, a man with a Trump flag holds a sign protesting the state shutdown. At left, a masked man holds an AK-47-style rifle. Kate Landis / PA Post

I’m wearing an N95-rated mask left over from a home remodeling project. I have plenty of hand sanitizer. And with my microphone duct-taped to the end of a hiker’s trekking pole, I hope to capture the scene while staying at least six feet away from people.

I’m headed a few blocks south, where hundreds of people are gathering for a rally to “reopen” Pennsylvania, despite that public health experts consider the current shutdown order essential to slow the spread of the coronavirus and keep infections at a manageable level for hospitals.

There are more than 33,000 confirmed cases of COVID-19 in the state, according to the Department of Health, as well as 1,200 confirmed deaths.

Hundreds of people are packed into pockets along Third Street at the edge of the state Capitol grounds. Some are wearing masks. Many aren’t. 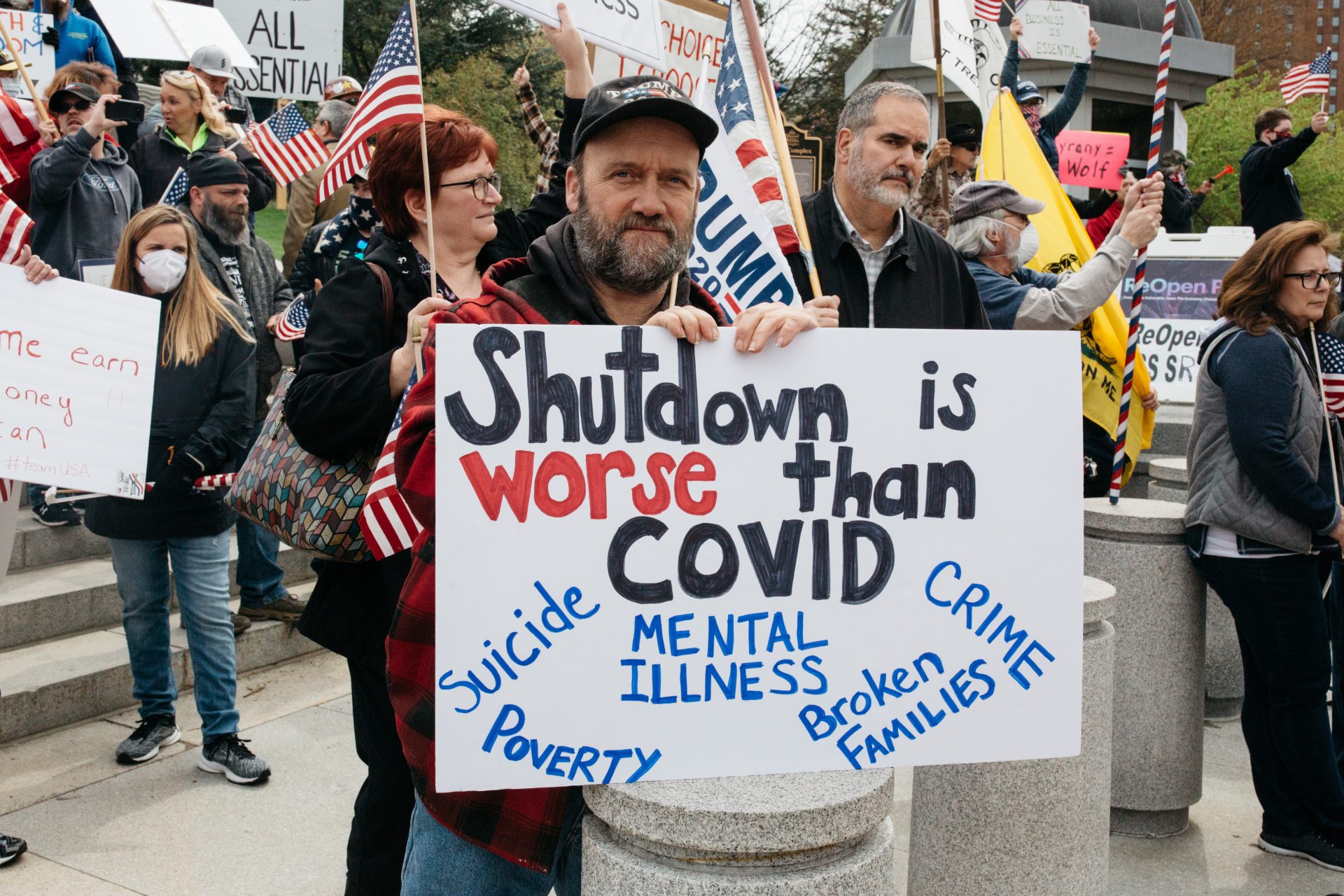 The science is clear. One of the top ways to spread the coronavirus is to get people together from different areas into one concentrated space. The virus can take a week or longer for symptoms to show up, and an unknown percentage of people never show symptoms.

But for those at the rally, economic issues are more of a threat than the virus. Speaking from inside his truck, Valley Forge-based construction worker Keir Maloney says his industry needs to get back to work.

”We can do this safely,” Maloney says. “We’re not dumb. We can be responsible. But give us that right. Give us that opportunity.”

Maloney says he wants lawmakers to “stop making this political.” But as I walk toward the Capitol, it’s looking like an election year rally.

Listen for yourself, here:

This demonstration was organized in part by Chris Dorr, an Ohio-based far-right activist who put together similar protests with his brothers in other states. Dorr also spearheaded Pennsylvania Firearms Association, a nonprofit claiming there is a “war against the Second Amendment.”

However, some Republican state legislators embraced the protest, turning it into a rally for two pieces of legislation aimed at opening up some businesses they say can safely operate.

Speaking on the steps of the Capitol, state Rep. Aaron Bernstine (R-Lawrence) leads chants and asks protesters to tell Gov. Tom Wolf to sign a bill aimed at reopening some businesses closed amid the government-ordered shutdown.

“These leaders must not focus on just the lives at risk from the horrible virus,” Bernstine says. “Many lives like yours are in danger from a shuttered business, the hunger and homelessness.”

Wolf vetoed that legislation hours later, saying it was “not an easy decision.” 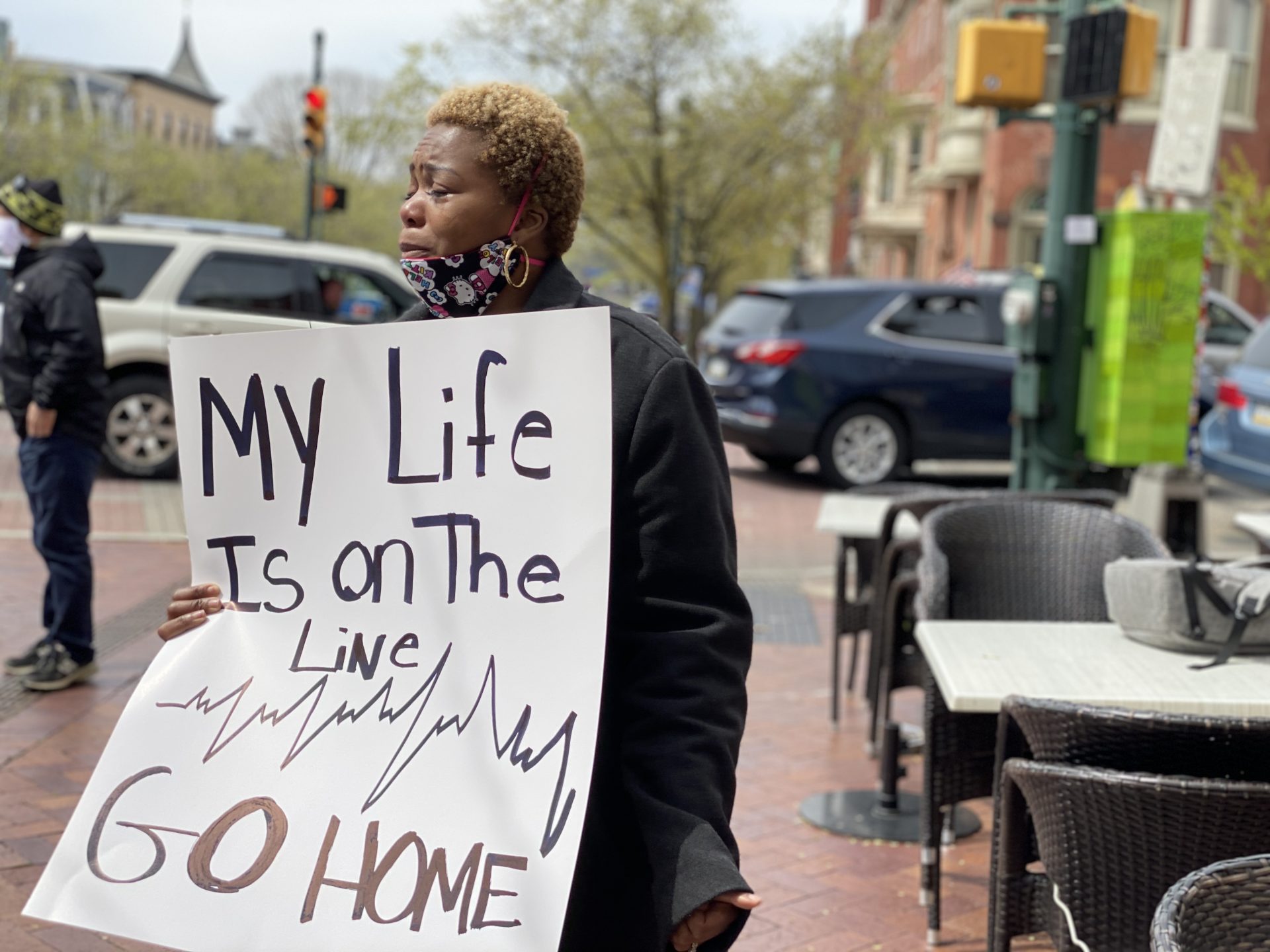 Joseph Jaafari / PA Post. Yetta Timothy, a certified nursing assistant in Harrisburg, was among a small group of health care workers who showed up to counter-protest the larger April 20, 2020, rally urging the quick reopening of Pennsylvania’s economy.

Protesters carry American Flags, but dozens of other flags, too. That includes flags for President Donald Trump—lots of them. While some people are here because they’re out of a job and need to get back to work, it’s also become a rally for Trump and for Pennsylvania Republicans.

The crowd is peppered with men carrying rifles, including Robert Wilson, who says his AR-15 is loaded and has a bullet in the chamber.

Wilson is one of several currently employed people I talk to who attended the rally. He’s a computer programmer who has been able to stay employed during the crisis.

He says he’s here to support others who are losing work—and the weapon is his way of fighting against the government “stepping all over all of our rights.”

To Wilson, that government overreach goes from the local level up to the federal government—but doesn’t include the president.

“I think Trump’s doing the best he can with the virus he’s being handed,” Wilson says. “I wish he’d be a little more bold in what he’s doing, but hey, I’m not in his shoes.” 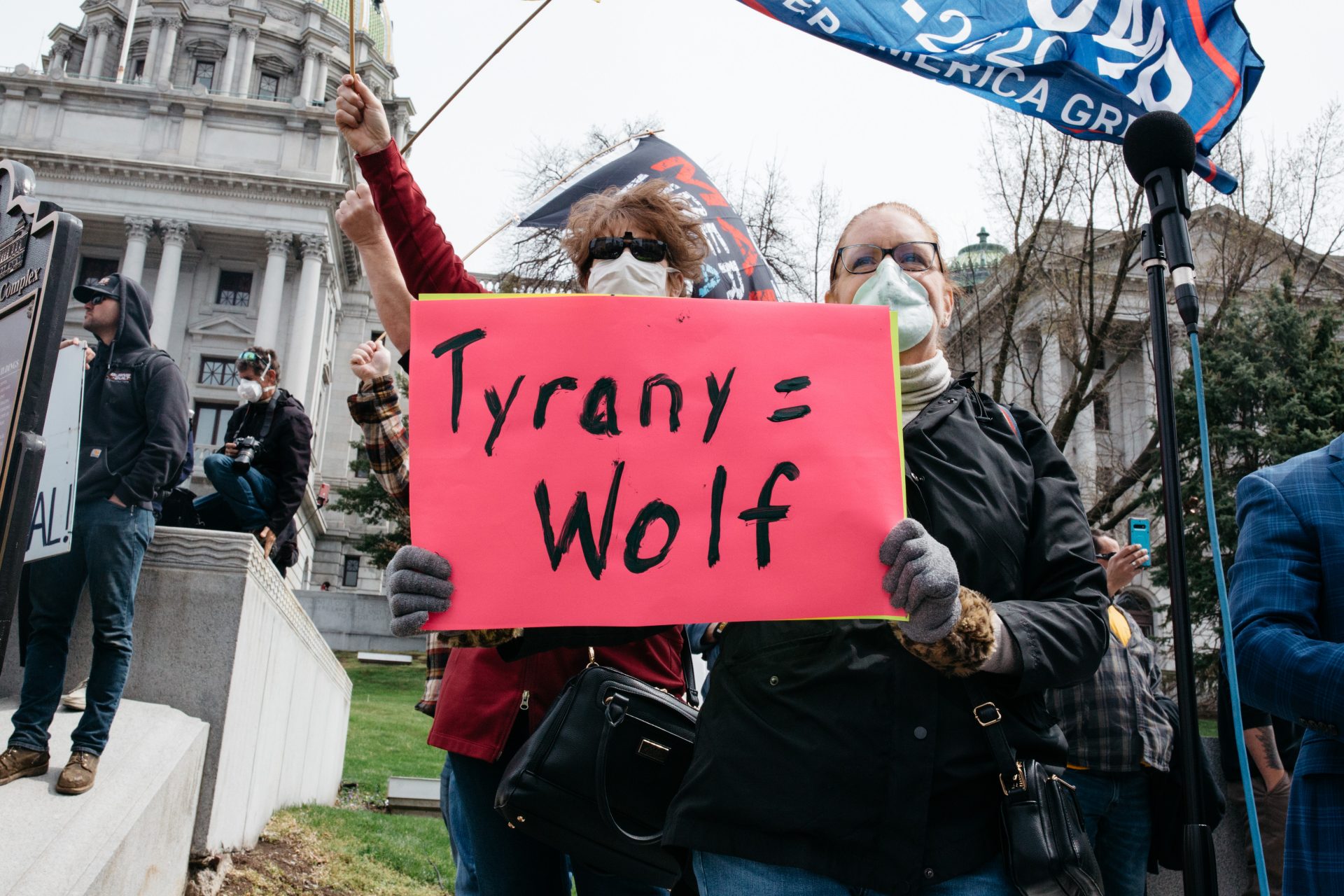 Kate Landis / PA Post. Women wearing masks hold up a sign while a Trump flag flies in the background at a rally to “reopen” Pa. businesses Monday, April 20, 2020.

While the crowd is standing shoulder to shoulder, some state lawmakers watch from the front stairs of the state Capitol. Pat Browne, the chairman of the state Senate GOP Caucus, says the protest is “the American way.”

Of course, people, and businesses, are suffering. More than 1.5 million Pennsylvanians have filed for unemployment in recent weeks.

The wave of unemployment has also revealed a new class division: Between those who can safely continue to work from home, and those who must risk their health to earn a living.

That includes health care workers like 43-year-old-Yetta Timothy, a certified nursing assistant in the Harrisburg area who is part of a small counter-protest warning the crowd of the dangers of failing to practice safe social distancing.

Timothy tells PA Post’s Joseph Jaafari she was stunned by the scene—and by the protesters yelling at her and other nurses and physician assistants as they drove by.

“I’m sitting here and I’m looking at the signs saying open PA with no testing,” she says, crying. “It’s like they don’t care about lives, the people around them or the people they love.”

For people who lost loved ones to COVID-19, as well as those who understand the science, rallies like this one are epidemiological disasters.

But as the country heads full-swing into the presidential campaign, it’s clear that some people either don’t understand the coronavirus, or they believe the risk of getting sick, dying, or getting other people sick is outweighed by their need to be heard.

For retired business owner Cathy Zimmerman, it’s a little bit of both. Zimmerman isn’t wearing a mask. She says she hopes she gets the virus so that she can develop immunity.

Though the coronavirus has sickened millions and killed more than 171,000 globally, she sees Pennsylvania’s response through the lens of partisan politics.

“I believe the governor and governors from New York and New Jersey have such hatred for Trump that they’re willing to tank our economy just to try to make Trump not get reelected.”

PA Post and Spotlight PA contributed to this report.