PENNLIVE – It could be weeks, if not months, before restaurants in central Pennsylvania are given the green light to reopen.

Even so, when dining establishments do return, the landscape is going to be very different. The days of bustling dining rooms will be a thing of the past.

Instead, disposable menus, masks, additional cleaning protocols, increased takeout and contactless payment will be on the menu.

“Restaurants are going to start doing things they never thought they would be doing,” said John Longstreet, CEO and president of the Pennsylvania Restaurant & Lodging Association.

It has been two months since economic shockwaves hit the hospitality industry as Gov. Tom Wolf ordered the end of table side service in an effort to curb the spread of the coronavirus. Restaurants pivoted to takeout, curbside and delivery models and still others closed kitchens.

The repercussions have been devastating. Nearly 1,000 out of 26,000 restaurants operating in the state have permanently closed due to coronavirus, Longstreet said.

Sales alone at Pennsylvania’s establishments in the first 10 days of April dropped by 82 percent, with losses projected at more than $1.8 billion by the end of the month, according to the association.

Now, as many owners focus on the future, “they are just trying to figure out how they get to the other side,” Longstreet said.

While Wolf has issued a phased in approach for opening businesses, the administration hasn’t unveiled a blueprint for restaurants to follow.

As a result, owners say they are faced with unanswered questions – Will buffets be allowed to operate? Will temperature checks become the norm for diners? Will outdoor seating be permitted and How many people should be seated around tables?

“The more you think about it, the road back is really hard,” said Don Carter, Jr., owner of five Harrisburg-area restaurants including Duke’s Bar & Grills in Hershey, Hampden Township and Wormleysburg.

Both Duke’s in Hershey and Hampden Township and Dockside Willies in Wormleysburg are open for takeout.

Early on, Carter said he figured he could formulate a reopening plan. After all, he has bounced back from devastating floods and a fire, but he soon discovered a pandemic is not the same.

As one example, he asked what is the protocol if a customer walks to the restroom without a mask? And do restaurants turn to single-use disposable paper menus?

“I had to give it up because there was no figuring it out. There’s no game plan for this,” he said. I’m just scared to death of all the issues we have facing us.”

For now, he said his only hope is restaurants are given appropriate directions and are able to limit people’s exposure, so the pandemic doesn’t drag on longer.

Wolf has announced a phased-in COVID-19 reopening plan for businesses. On May 8 counties in northcentral and northwestern Pennsylvania were lifted from the stay-at-home order and entered the yellow phase. An additional 13 counties, all in the southwestern part of the state, are slated to enter the yellow phase on May 15.

Even in those counties, restaurants will still be limited to takeout and delivery.

Under the governor’s plan, restaurants would not be allowed to resume dining room service until a region or county reaches the final green phase.

Each state is drafting its own guidelines for restaurants to follow, so Pennsylvania owners say they are watching the other states. Restaurants in several states including Florida, Tennessee and Georgia are easing dine-in restrictions.

In Florida, restaurants are opening outdoor seating and permitted 25 percent occupancy inside. Georgia restaurants are allowing no more than 10 patrons per 500 square feet, limits of six guests per table and masks for all employees, among other measures.

Some restaurants in Tennessee are checking diners’ temperatures and requiring workers wash hands after every credit card transaction.

Diners are still not permitted to sit inside the cafes and the number of customers will be limited. Floor markers and signs will mark proper, socially distancing areas, according to the chain’s website.

Guidelines call for restaurants to clean tables, condiments, reusable menus and digital ordering devices between seatings. Restrooms also should be cleaned and hand sanitizer made available.

It further encourages restaurants establish reservations guidelines or call-ahead seating policies and prevent guests from congregating in bars or lobbies. 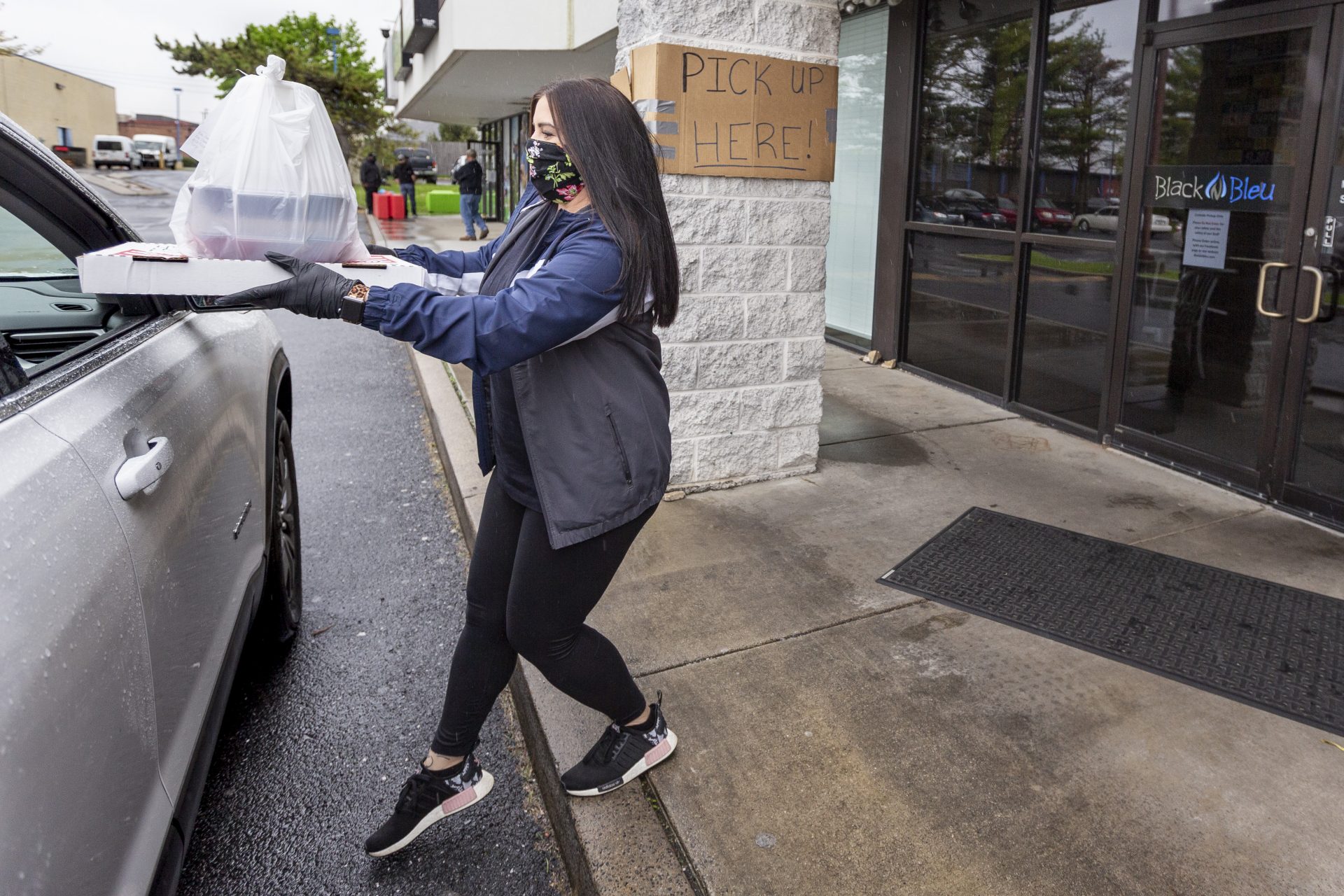 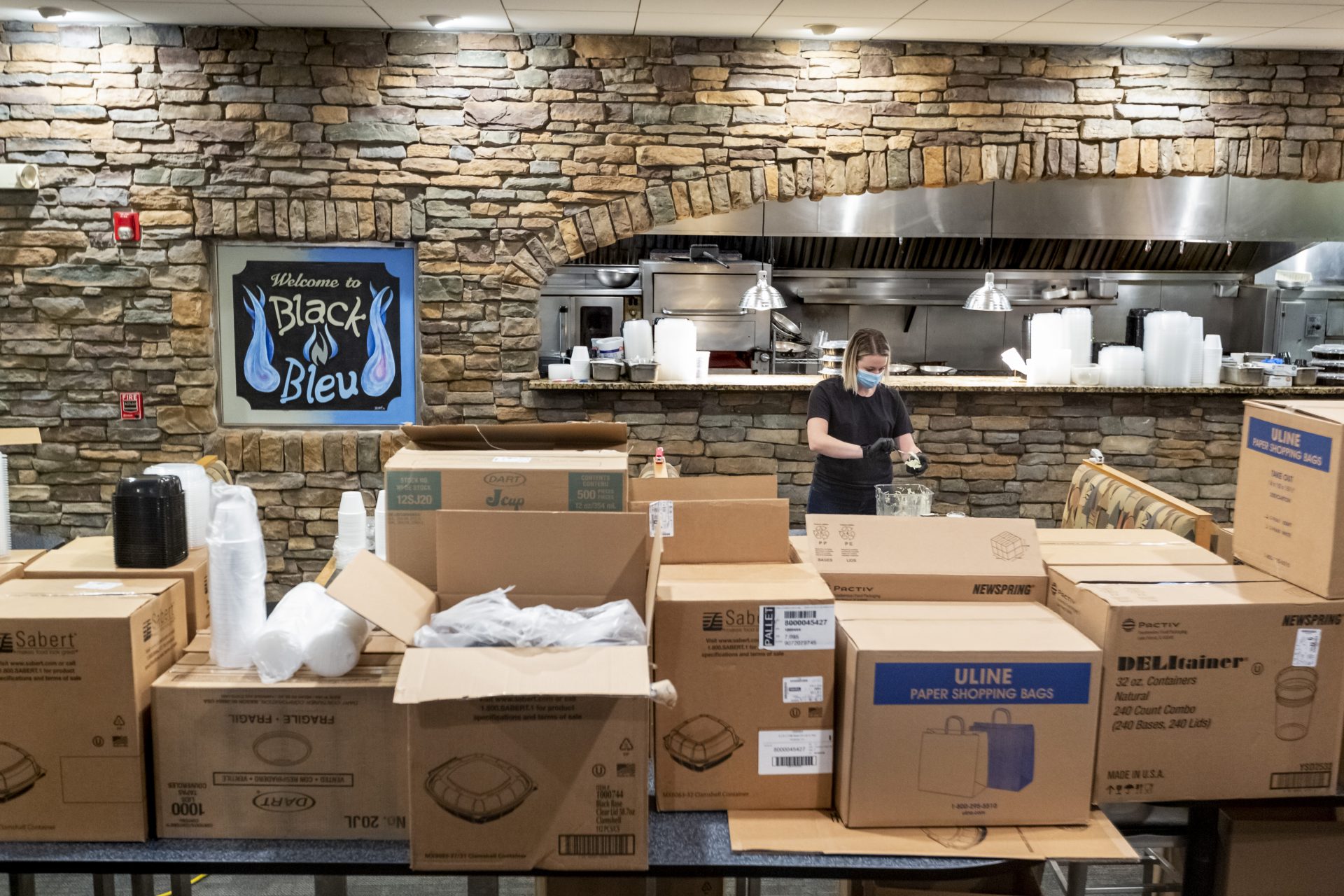 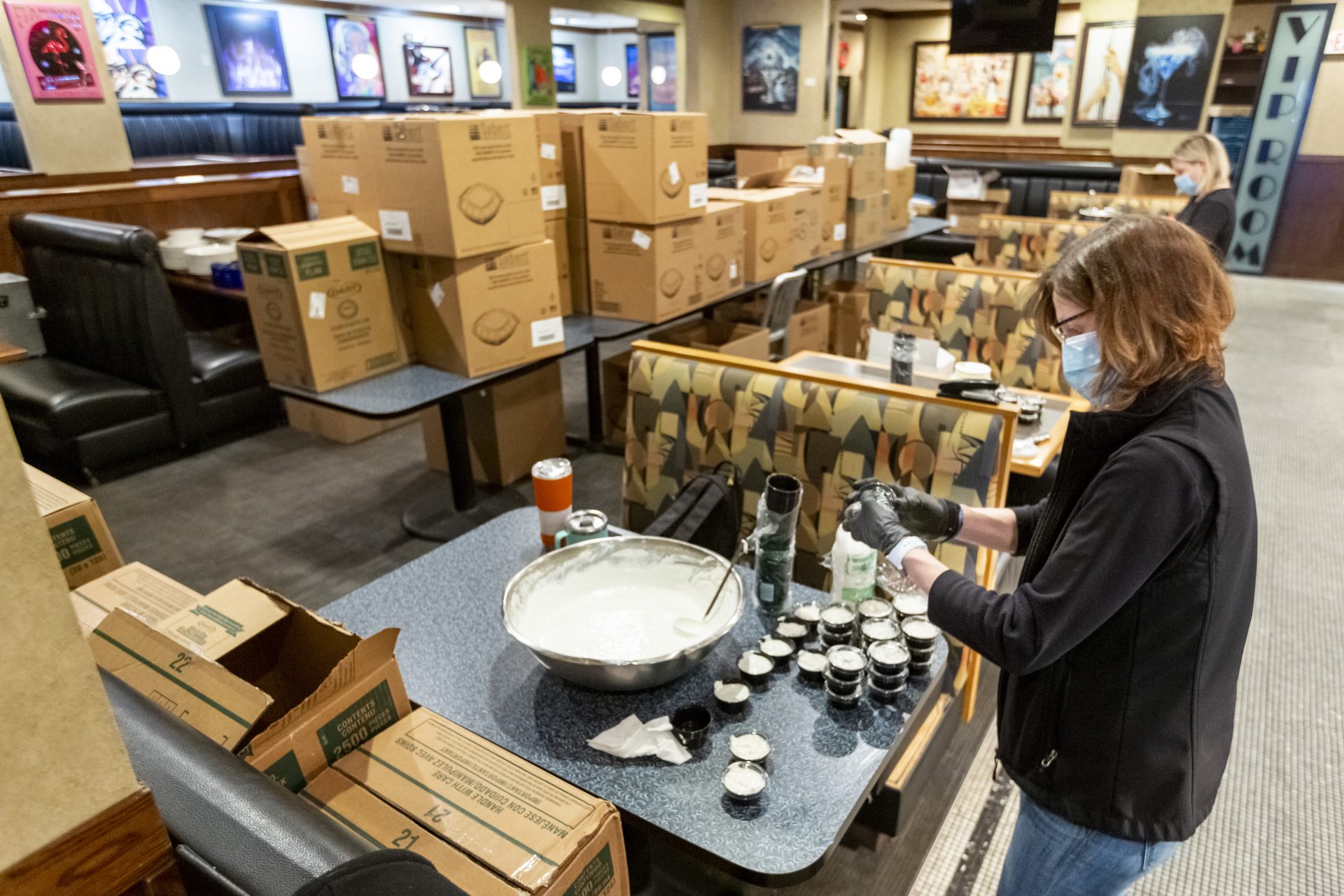 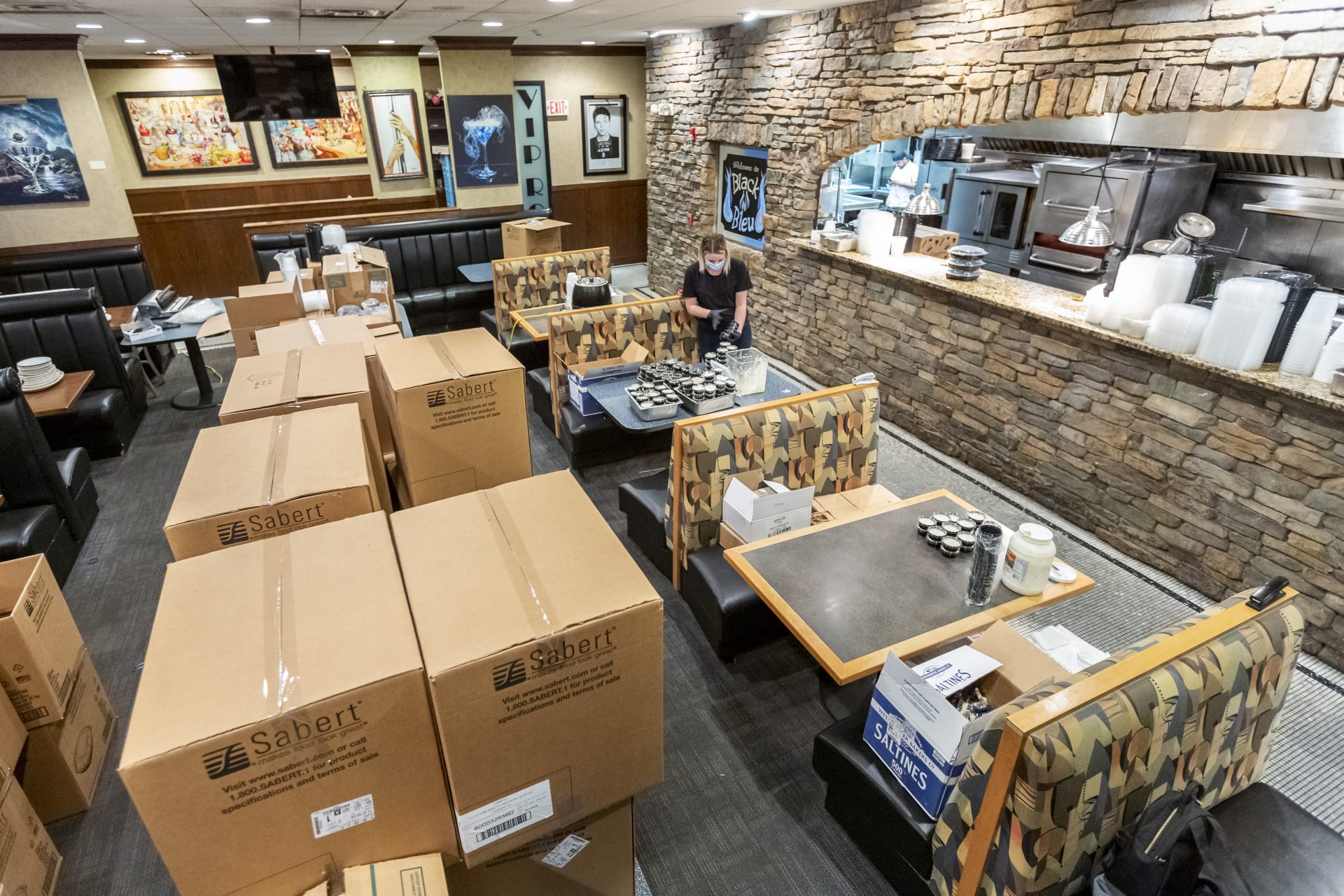 Looking ahead, restaurant owners like Donny Brown, owner of Black n’ Bleu in Hampden Township, say success will ride on how willing restaurants are to make changes.

“I just think it’s a game of adjustments, and we are just constantly making adjustments. Ultimately, for us, we need to re-open,” he said.

Brown anticipates reopening this summer but admits it’s hard to visualize. They have made adjustments to the dining room, including ripping out a 12-person VIP booth and replacing it with smaller tables. He’s also working with the Pennsylvania Liquor Control Board for permission to add outdoor seating.

The restaurant association is hoping municipal governments and the Pennsylvania Liquor Control Board will relax laws about sidewalk and outdoor dining to promote social distancing, Longstreet said.

Outdoor seating would help, if anything Brown said because restaurants like himself will not be able to survive and pay the bills operating even at 50 percent capacity.

Restaurants are built and designed at a certain size to be profitable, and now they are going to be possibly operating for a long time at diminished capacity, Longstreet said. He predicts restaurants may consider expanding their hours to make up for the seating shortages and diners will have to adjust what time they eat lunch or dinner.

Slimmed down menus also may become a new trend Longstreet noted as owners encounter supply issues with certain ingredients or want to streamline operations for takeout.

Practices already happening such as takeout and delivery might evolve into a normal revenue stream for many restaurants, Longstreet added. Some restaurants that never offered takeout are set up like well-oiled machines catering to cars as they line up to pick up orders in parking lots.

Jessica Demopoulos, co-owner of Chocolate Avenue Grill and Smoked Bar & Grill in Hershey, agrees takeout and delivery will be the new model for a long time, even when dining rooms are allowed back open.

Chocolate Avenue is temporarily closed due to a construction project. But at Smoke, she said they spent a lot of time narrowing down the menu and concentrating on the most popular items to avoid wasting products. Now, they are running into supply chain issues with items such as certain meats and poultry.

“We are constantly racking our brains just trying to assume what’s going to happen to try and change our game plan,” she said.

They’ve also talked to a printer about creating single-use, disposable menus and are stocking up on extra cleaning solution. Of all the precautions, Demopoulos’ biggest concern is the safety of employees and guests.

“If something would happen where [coronavirus] has been in our restaurant and an employee has contracted it from a customer, then it’s something we need to report,” she said.

Along with safety, restaurant owners say they are concerned about consumer confidence.

“What is the recovery time going to be like? Our expenses aren’t going down. It’s going to be a challenge,” said Judd Goodman, owner of Federal Taphouse restaurants in Harrisburg, Hampden Township, Lancaster and State College.

Goodman said he wonders if guests will immediately return or it will take several months until confidence grows.

In the meantime, he has launched Federal Taphouse Express, a food and beer pickup and delivery service available at the Harrisburg and State College locations. Customers place and pay for their orders online and pick up the food at the restaurants.

He’s also devising an online catering program in hopes of appealing to city and state workers, once offices reopen. As a temporary fix, Goodman said he’d like to see the city step up with outdoor seating and hand washing stations along the river as a place for people to safely dine over lunch.

When the Taphouse restaurants are permitted to open, Goodman said staff will abide by rules of using masks and gloves and sanitizing. He’s also considering purchasing chalkboard menus servers can show to guests as a touch-less option.

“Everything is so ambiguous. We’re not sure what it’s going to look like,” Goodman added.