KEYSTONE CROSSROADS — Pennsylvania’s state lawmakers are beginning a last-ditch attempt to pass a congressional map. If they don’t succeed soon, the commonwealth’s appellate courts will likely deem them deadlocked and take over the process.

With only a handful of session days remaining before the Jan. 30 deadline imposed by Pa. Commonwealth Court, the Republican-controlled state Senate is trying to cobble together a compromise between their own members, the GOP-controlled House, and Democratic Gov. Tom Wolf.

On Tuesday, the Senate began moving the bill that will contain their proposal, if one coalesces in the coming days.

They plan to amend the GOP-backed map proposal that House lawmakers passed last week — a process that would essentially remove the House plan and insert the Senate’s. Sen. Dave Argall (R-Schuylkill), who chairs the Senate committee charged with redistricting, hopes to hold some kind of a public hearing on his chamber’s plan this week, then pass the map back to the House for approval early next week.

“There’s a lot that could still go wrong,” Argall said, adding that the odds of the legislature passing a map are, “50 – 50, maybe.”

Argall and Senate Democratic Leader Jay Costa both confirmed that on Tuesday, staff for Senate Democrats and Republicans held meetings aimed at coming up with a plan.

Costa was even more skeptical than Argall of the Senate’s odds of coming up with a map that the House, governor, and its own members will agree to pass.

“We’re starting to get back into those conversations again …. and it may not lead anywhere at all,” he said. “But at least the effort is being made to have conversations.”

The prospect of the Pa. Supreme Court being the final arbiter of the map is likely a much more welcome prospect to Democrats, who hold a sizable advantage on the state’s high court.

So far, the Senate hasn’t publicly released any proposal, despite behind-the-scenes bipartisan talks between staff for Argall and Sen. Sharif Street (D-Philadelphia).

Argall says any plan that comes out of this week’s Senate negotiations will take other proposals into account — specifically, the House GOP plan, a plan Gov. Tom Wolf pitched days ago, and a map from the group Draw the Lines PA, a project of the good-government group Committee of Seventy that produced a draft after holding a series of mapping contests that ultimately solicited drafts from more than 7,000 Pennsylvanians.

Chad Davis, a staffer for Argall who has been heavily involved in the mapping process, added that he thinks it’s “safe to say that we are not opposed to every district the governor drew, or every district Draw the Lines drew.” 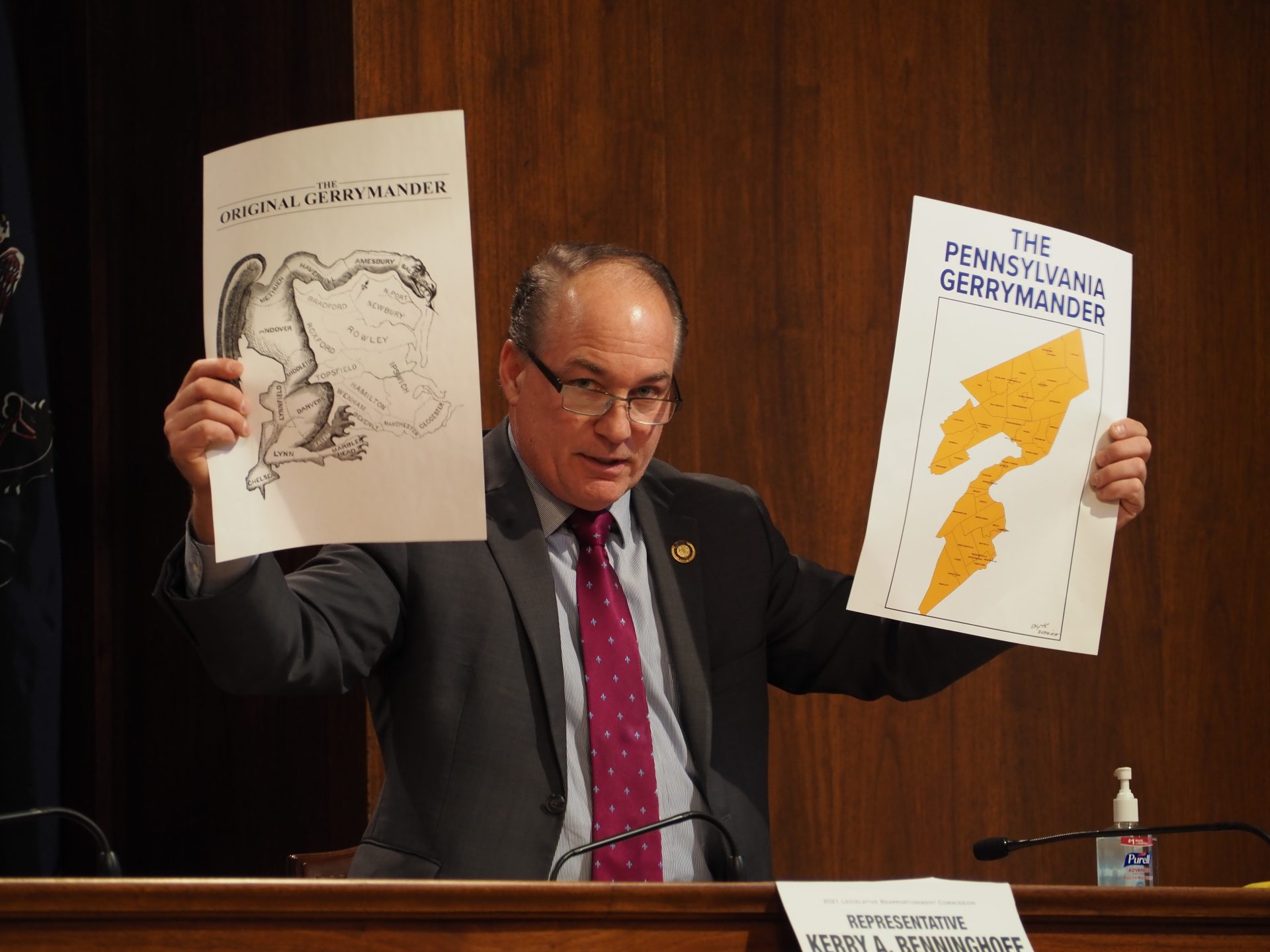 Sam Dunklau / WITF House Majority Leader Kerry Benninghoff (R-Centre) holds up a map of a proposed state House district and compares it to another political cartoon demonstrating a “well-fed lizard” gerrymander on at an LRC meeting on Dec. 16, 2021

Most of the maps proposed so far have been relatively consistent in terms of partisan slant. They usually have between five and seven districts that are safe for Republicans and Democrats, plus four to six swing districts.

But those small variations in safe districts, and the ways swing districts tilt, can be enough to grind the whole process to a halt — not to mention individual lawmakers’ preferences when it comes to the specific ways the regions they represent are divvied up.

The Draw the Lines PA map, meanwhile, would create five safe Democratic districts and six that would be safe for the GOP. Of its six swing districts, one would lean toward Republicans, and the rest would favor Democrats.

These partisan analyses come from Dave’s Redistricting App, a nonpartisan website that produces assessments of political map data, and are based on a composite of past election results. They aren’t guarantees, but they show what kind of results, on average, a given district might yield.

Although Democrats have a voter registration advantage in Pennsylvania, it has historically been relatively easy for Republicans — who controlled the last two rounds of post-census redistricting — to draw maps that disadvantage their opponents. Democrats tend to live in densely cluttered cities and suburbs, whereas Republicans are spread over a much wider area of the state, which leads to a more efficient distribution of voters when it comes to redistricting.

Costa notes that although he believes it is the legislature’s “obligation” to do its best to pass a congressional map, he thinks it’s very possible it falls to the courts.

“There have been a lot of conversations that have taken place over the many weeks and months that have not produced the result at this point,” he said. “It’s got to be the right map for us to agree to it, or for the governor to agree to it.”

Courts have stepped in and drawn congressional maps the last two times the legislature has deadlocked on its mapping duties. In both cases, a divided government led to the impasse.

The last time this issue arose was 2018, when the state Supreme Court found a previous, GOP-drawn congressional map to be unconstitutionally gerrymandered and ordered the legislature and governor to redraw it.

When the lawmakers were unable to come to an agreement, the court-appointed redistricting expert and Stanford Law professor Nathaniel Persily to consult on the new plan. The resulting congressional map helped Democrats gain seats in the commonwealth’s congressional delegation.

The last time it happened during routine redistricting was 1992, when Democrats held the governorship and controlled the state House, and there was a Republican majority in the Senate. After the legislature failed to reach consensus, the Pennsylvania Supreme Court intervened, selecting a judge to pick a map that the political parties had submitted.

A case currently before Commonwealth Court has plaintiffs arguing the legislative process will inevitably fail to produce a congressional map, and that the courts should intervene — especially because, given that Pennsylvania lost a congressional seat in the latest census, the current map cannot be reused.

In an order issued in late December, the Commonwealth Court set a Jan. 30 deadline for Wolf and the legislature to enact a map. If the legislature doesn’t pass one, or Wolf doesn’t approve it, the court said it would instead select a plan from “those plans timely filed by the parties” in the lawsuit. Those parties will likely include Republicans and Democrats from the legislature, Wolf, several congressional representatives, and various citizens.

That process will be made moot if the Supreme Court takes up the case.

Plaintiffs in the Commonwealth Court case have asked the high court to use its King’s Bench Power to immediately step in to expedite the process. Justices indicated last week that they aren’t ready to seize the redistricting process from the legislature, but left open the possibility of intervening when the deadline gets closer.