KEYSTONE CROSSROADS – No, it wasn’t a debate. But the two men vying to win Pennsylvania’s gubernatorial election did appear in Philadelphia Wednesday to answer the same set of five questions, one after the other. Their interrogators were elementary-aged children, and the questions revolved mostly around education.

The event, organized by former Governor Ed Rendell and the Rendell Center for Civics and Civic Engagement, featured few fireworks — as both men were never in the room at the same time.

That dynamic surfaced almost as soon as the candidates took their seats — or in Wagner’s case, began pacing the room.

Moderator Michael Barkann, a local sportscaster, jokingly asked each contender who they’d support in a theoretical Super Bowl matchup between the Pittsburgh Steelers and Philadelphia Eagles. 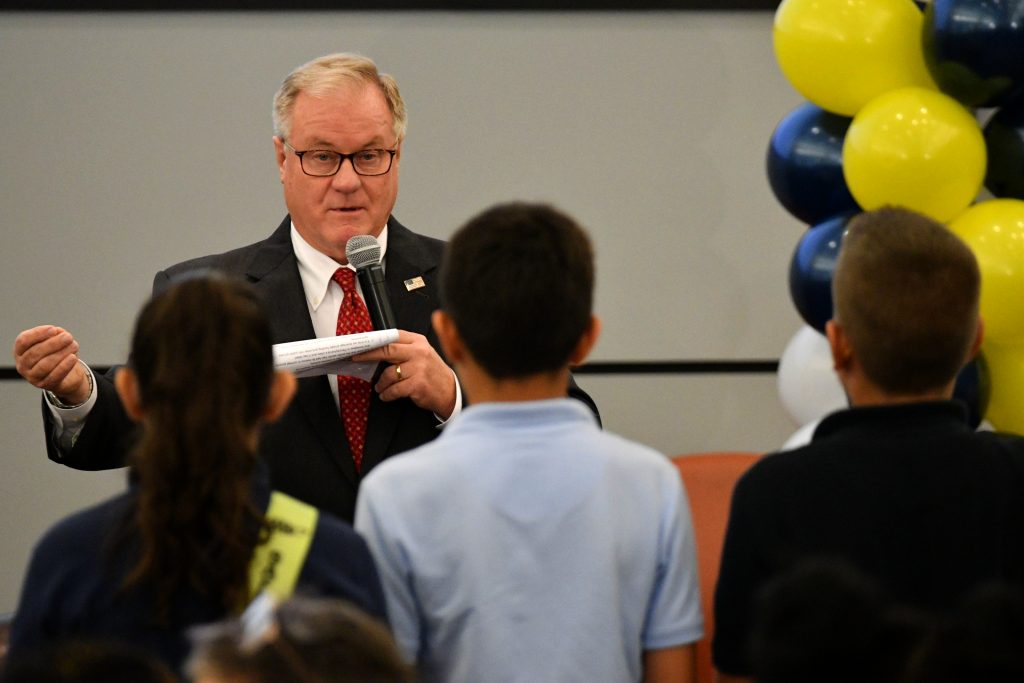 Wolf kept his answers concise and focused, referring repeatedly to past accomplishments, but saying relatively little about how he’d move forward over the next four years.

In response to a question about school safety, Wolf referenced a new $60 million school safety fund the legislature approved earlier this year and a school safety task force he helped convene.

“The goal is to in fact make sure we have safe schools so that when you come to school it’s one place you can feel secure and confident that something bad is not going to happen to you,” Wolf said. “We need to make sure that happens and I’m committed to that.”

Wagner’s answers tended to run longer — with more twists and turns — but he did provide some specific new proposals. On school safety, he said Pennsylvania schools should have one point of entry, metal scanners, and more security guards.

A second question on bullying prompted Wagner to say he supports zero-tolerance discipline policies, abolishing cell-phone use in class, and the idea that all students should wear school uniforms.

Later in the forum, he called standardized testing “a total waste of time.”

Wagner’s bluntness spilled over into this post-forum media availability, where he claimed Philadelphia had an “unbelievable” level of corruption and said City Council members need “to start doing their jobs.”

“I probably know the issues of Philadelphia five times better than Governor Wolf because I talk to the right people,” Wagner said. “I’m not talking to the muckety-mucks over here in City Hall.”

The student audience was composed and enthusiastic. They gave high marks to both candidates, though Wagner’s school uniform idea left a few scratching their heads.

In a nod to the power of incumbency, many said the most memorable part of the forum was when they got to meet Governor Wolf afterward.

As one student from Anne Frank Elementary School in Northeast Philadelphia put it: